Listen to Flashpoints for Jan.12, featuring a lively conversation between host Dennis Bernstein and Minister of Information JR and Holly Works of the Oakland 100 and Holly’s attorney, Stuart Hanlon. Hear the whole show – also covering Haiti and Palestine – or go direct to the Oakland 100 segment by pushing the slider to 44:24 minutes in. 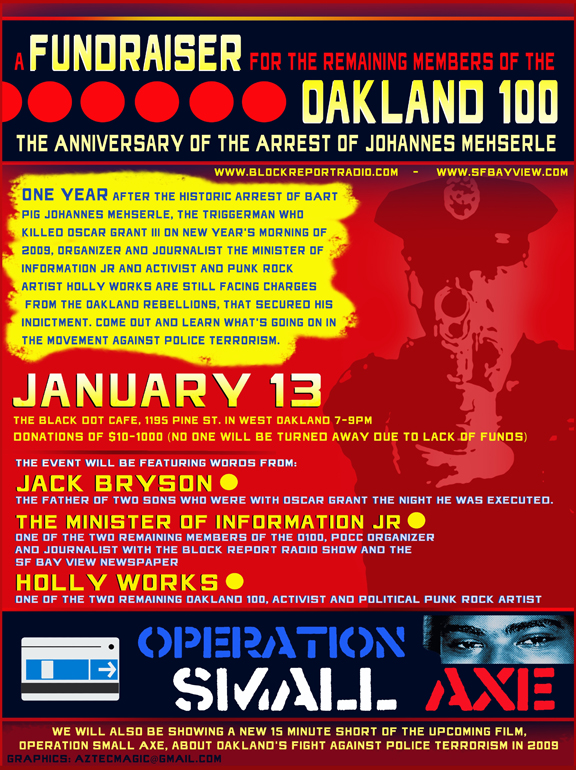 One year after the historic arrest of BART cop Johannes Mehserle, the triggerman who killed Oscar Grant III on New Year’s morning of 2009, organizer and journalist Minister of Information JR and activist and punk rock artist Holly Works are still facing charges from the Oakland Rebellions that secured his indictment.

Watch a screening of the new 15-minute short of the upcoming film, “Operation Small Axe,” about Oakland’s fight against police terrorism in 2009. The film has just been chosen to be screened in the prestigious Pan African Film Festival in Los Angeles in February.

Donations of $10 to $1,000 are requested, but no one will be turned away for lack of funds. Funds are needed for JR and Holly’s legal defense and to replace JR’s camera. Oakland police seized it when he was arrested while covering the rebellion as a journalist and, though he needs it to support his family, they still have not returned it.

More information on the Movement for Justice for Oscar Grant will be posted here at sfbayview.com as it is received. Other good sources are blockreportradio.com and indybay.org/oscargrant.