On Friday’s Hard Knock Radio and Flashpoints shows on KPFA at 4 and 5 p.m., Minister of Information JR reported straight out of Los Angeles on the first pre-trial hearing since the murder case of Johannes Mehserle, the BART police officer who executed Oscar Grant, was moved there from Oakland. JR was there as a journalist for the San Francisco Bay View and Block Report Radio as well as KPFA and as an organizer for the Prisoners of Conscience Committee. Here are his reports:

Push the slider to 26:09 minutes into the show, or listen to both Hard Knock and Flashpoints all the way through – excellent shows!

The Oscar Grant segment starts 7:27 minutes into the show. 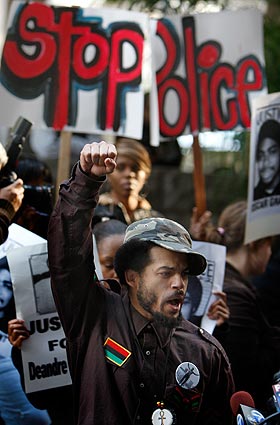 The majority of the protesters were Angelinos, bolstered by a sizable contingent of Oaklanders and other Bay Area residents who had traveled to LA to monitor the trial of triggerman Johannes Mehserle, the BART cop whose 2 a.m. New Year’s Day 2009 execution of unarmed Oscar Grant, 22, on an Oakland BART platform in front of hundreds of horrified witnesses was captured on cell phone cameras and watched by millions around the world.

An Oakland judge had moved the trial out of Oakland and Alameda County after agreeing with Mehserle’s lawyer that too many potential jurors there had experienced police terrorism for a police officer to get a fair trial. The lawyer also argued that the Oakland electorate had been prejudiced by heavy media coverage in the Bay Area – the pressure of more than 4,000 stories in the first eight months of 2009 having been maintained especially by independent media – and by the Oakland Rebellions in January 2009 that had resulted in the first indictment of a cop for murder in California history.

The judge agreed that a jury would fear that acquitting Mehserle could incite another rebellion. But the new venue is Los Angeles, and Los Angeles is the site of the largest rebellion in history over the acquittal of police pursuing their war on the Black community. Ironically, that acquittal had followed a change of venue, that time from LA to Simi Valley.

“The news of acquittal [of the police whose 1991 beating of Rodney King was caught on a video seen by millions] triggered the Los Angeles riots of 1992. By the time the police, the U.S. Army, the Marines and the National Guard restored order, the casualties included 53 deaths, 2,383 injuries, more than 7,000 fires, damages to 3,100 businesses, and nearly $1 billion in financial losses. Smaller riots occurred in other cities such as Las Vegas and Atlanta,” reports Wikipedia. 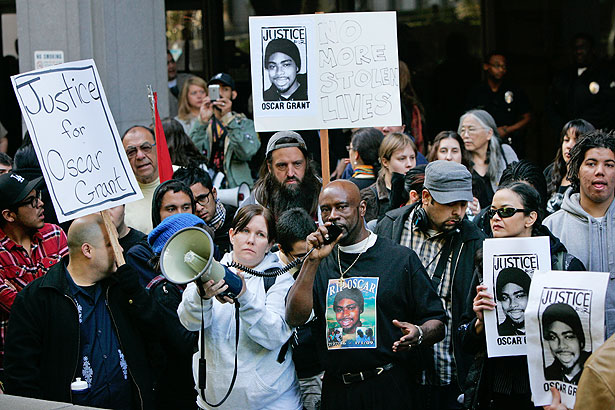 As one reason for his Oct. 16 decision to move the Mehserle trial out of Oakland, Superior Court Judge Morris Jacobson quoted the judge in the Rodney King case complaining about the prejudice he considered inherent in the widespread viewing of videotaped police brutality. Judge Jacobson wrote:

“The words of the Court in Powell, supra, [the Rodney King case] apply with equal force here [in the Oscar Grant case]: ‘[i]t cannot be disputed that difficulty in obtaining a fair trial in Los Angeles County is exacerbated by the fact the defendants are police officers, sworn to protect citizens, to uphold the law and to maintain peace in the community. Their status is the basis of the intense coverage and repeated showing of the videotape. The fact that the videotape depicts local officers in such conduct threatens the community’s ability to rely on its police and has caused a high level of indignation, outrage, and anxiety.’ (Powell [v. Superior Court], 232 Cal.App.3d at 798.)” …

“With the exception of Powell, supra, no published case in California, and no case in this court’s memory has stimulated either the breadth or the depth of political activity that has been present in this case,” wrote Oakland Judge Jacobson, referring to the Oscar Grant case.

Not knowing that Los Angeles would be the new venue, Judge Jacobson ordered Mehserle’s trial moved out of Oakland to avoid a Rodney King-level “riot.” In the decision, he wrote: “Anyone who lives or works in Oakland is genuinely in fear of more civil unrest and violence. … It is foreseeable that these fears may be realized should a jury return a verdict other than ‘guilty’ on the murder charge.” He mentioned the protests of the week prior to his decision as an indicator that jurors would be “exposed to protestors’ angry demand for ‘justice for Oscar Grant’ each time they go in and out of the courthouse, a constant reminder of the impending civil unrest.” 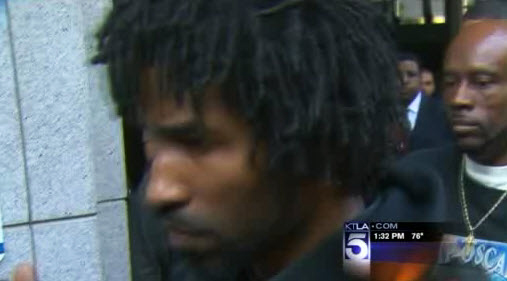 Jacobson even quoted “Oakland Tribune columnist Tammerlin Drummond [who] wrote: ‘How can you possibly have a free and fair trial when people are swinging from lamp posts outside the courthouse, ranting about killer cops and threatening to take matters into their own hands if Mehserle is not convicted of murder? What sane potential juror wouldn’t be terrified at the mere prospect of having to walk past that every day?’”

But Friday’s rally and pre-trial hearing in Los Angeles proved that neither the fervor of protesters nor the intensity of media coverage has been reduced by the move from Oakland.

KTLA News reporter Lynette Romero introduced her report with these words: “This case is more than just controversial. In fact, after the murder there were actually riots in the city of Oakland, and the hope was that a change of venue was going to calm things down. But I can tell you that in front of this courthouse this morning, things were anything but quiet.”

NBC, the LA Weekly and the Los Angeles Times were also there. “More than 100 protesters demanding justice for a Bay Area man shot to death by a BART police officer on New Year’s Day last year converged on a downtown Los Angeles courthouse today for the first proceedings since the racially charged case was moved here from Alameda County,” reported the LA Times.

KTLA News wrote: “Dozens of demonstrators lined the street, awaiting the arrival of 27-year-old Johannes Mehserle, who was scheduled to attend a pretrial hearing. The protesters were being monitored by about two dozen Los Angeles police officers and sheriff’s deputies.”

That report quoted a woman who spoke at the rally, summing up the reason all the protesters, wherever in the country they come from, are demanding a conviction: “Today we demand justice for all the people that suffer in the hands of the justice [system].”