“Pretending to promote job creation, the government is dispensing cash to companies that either do not need it or need it precisely because they didn’t run their businesses prudently. Isn’t there something wrong with that picture?” – Gretchen Morgenson, New York Times 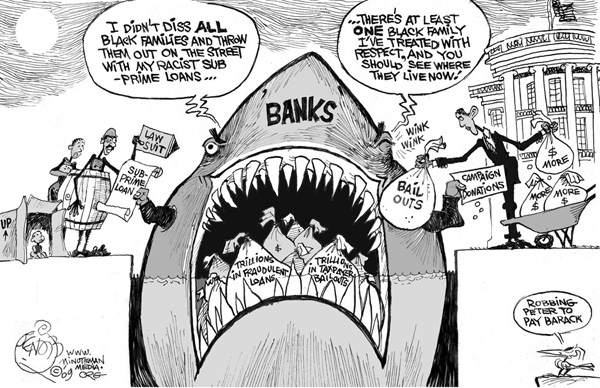 What finally helped Lennar turn the corner? Homebuyers flocking back into its overbuilt communities in Florida, Nevada, California and Arizona, despite fierce competition from all the foreclosures and distressed properties, including those on Lennar built – and financed – homes?

No, the good news was a federal bailout for big industrial homebuilder-lenders. Though described as a “tax credit,” this was cold cash – a check in the mail – straight up help for a corporation that had been reporting losses for three years in a row.

Lennar got $320 million – cash – because the “tax credit” generated a “tax refund,” retroactive five years back to when Lennar was actually generating a profit. The corporation invested $240,000 in lobbying for it and, without it, Lennar would have posted a $284.9 million, or $1.15 a share, loss. 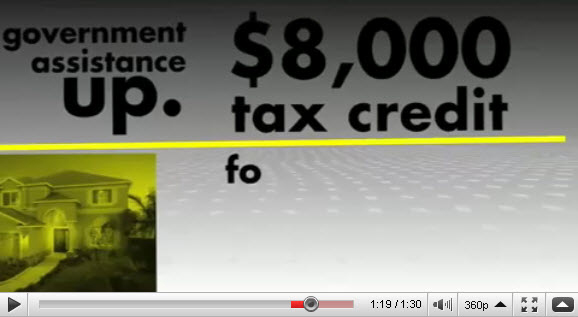 As usual, those with the cash to lobby for more got it. Those with no cash got earned income tax credits of questionable value to them but sales “incentive” value to Lennar, the other big builder-lenders and the rest of the real estate industry.

Stockholders responded to Lennar’s surprise “profit” by driving its stock upwards by 15 percent in one day, confirming once again that a corporation’s ability to turn a “profit” with legal, in-your-face corruption – a.k.a. paid lobbyists – now makes it a desirable investment. On Jan.14, 2010, Barclay’s upgraded Lennar stock to “Overweight from Equal Weight, as analysts believe there is further upside to be seen this year,” and increased the stock’s target price to $20 from $17.

Never mind that Lennar’s revenue fell 29 percent to $913.7 million, because of a 22 percent drop in the number of completed home sales.

Never mind that the average sales price of a home dropped 9 percent annually to $238,000.

Never mind the next waves of foreclosures that, barring drastic federal action, will further heighten the foreclosure and distressed real estate competition in Lennar’s markets, which include parts of Nevada, Florida, California and Arizona, states with the highest foreclosure rates.

And, never mind that Lennar’s “profit” didn’t even equal the cold cash handout. Lennar used $284.9 million of its cash tax refund to cover its losses and then reported the remaining $35.6 million as profit to its shareholders.

Sleight of hand and language most of us don’t understand

The criminal financial sector now laying the world to waste is getting away with it largely because most Americans’ eyes glaze over at terms like derivatives, mortgage-backed securities and credit default swaps and even the fairly comprehensible accounting tricks and sleight of hand. But we can also thank a lot of lazy business press for bizarre reports like this:

“The surprise Lennar profit may also indicate the extent to which the California market has recovered, as one of Lennar’s strengths on the road to recovery is expected to be its concentration in California neighborhoods where home prices and sales have been rebounding.” – The Street, Jan. 8, 2010

Two paragraphs later in the same article, the writer acknowledges, “The quarterly profit was, in truth, driven by a one-time tax benefit …”

Earned? By sending lobbyists to Washington for a handout to cover Lennar’s hundreds of millions in quarterly losses, plus $35.6 million to post as profit, driving its share price upwards?

But, the business press also characterizes private prisons as “private prison realty” or “real estate investment trusts,” a.k.a. REITS, so why be surprised?

Not all business writers, however, are quite so sloppy or unintelligible. Eric Rosenbaum, another The Street writer, reported, on Jan. 12, 2010:

“After Lennar’s (LEN Quote) surprise profit last week based on a similar, and even larger-sized tax benefit, shares of all the homebuilders surged, especially Lennar, which managed a one-day 15% gain. The government’s new Too Big to Not Build tax bailout plan for the homebuilders seemed to send investors back into the beleaguered homebuilder sector.

“However, analysts were somewhat perplexed by the level of excitement generated by the Lennar tax-based profit, since taking tax gains has been a trick used by banks for years to engineer, as opposed to earn, profits.“

Just to make Lennar’s “profit” as simple as it really should be – which should be simple enough to stop it from happening – here’s a summary in 1-2-3 form:

3) Lennar then reported the remaining $35.6 million as profit, earned income.

4) Taxpayers, yet again, footed the bill.

And our federal government justified this, just as they have every move made to relieve economic stress, as trickledown economics. By giving Lennar money, the feds would encourage them to employ the rest of us, putting wages in our pockets, which we would then spend and circulate to get the whole merry-go-round going again. To quote the Worker, Homeownership, and Business Assistance Act of 2009:

“Creates Jobs by Cutting Taxes for Struggling Businesses. The bill provides an expanded tax cut to tens of thousands of struggling businesses, providing them with the immediate cash they need to pursue an expansion or avoid contracting or furloughing their workers. … Today, the President extended that benefit for an additional year and expanded it to medium and large businesses as well.”

Large businesses – meaning big builder-lenders, including Lennar. This bill began as a break for the rest of us, but then the federal lobbyists moved in, even though most of the big builder-lenders, including Lennar, are sitting on lots of cash. Though the company just reported its first “earned income profit,” all the financial media report that it’s flush:

“Lennar ended the quarter with $1.3 billion in cash. Several other builders also have robust balance sheets after spending the last several years trying to accumulate cash, even at the expense of profitability, in order to survive the slump.” – Yahoo Finance, Jan. 7, 2010

With Lennar and others already hoarding to survive the slump, why would Congress or anyone expect them to let more government gifts trickle down to people suffering the consequences of the predatory lending and foreclosure, recession and now “jobless recovery”?

As the New York Times’ Gretchen Morgenson wrote, “Given that the supply of housing far outstrips demand, it is unlikely that these companies will use these tax breaks to hire workers (unless they go into a completely new line of business).”

So bail out the people

So why not bail out the homeowners still struggling to hold onto Lennar’s overbuilt, oversold, over-mortgaged homes, instead of the big builder-lenders? Why not further extend unemployment benefits? Create green jobs doing things that need to be done, like solar installation, bioremediation, forest restoration? Restore public transportation? Fund higher education, so that students don’t leave college strapped with desperate mountains of debt for the rest of their lives? Dare I say health care?

But, as Sigmund Freud said, “The voice of reason is very faint, but it is very persistent.”

So I’m still hoping for a local coalition, before the 2010 Supervisors’ elections in Districts 2, 4, 6, 8 and 10, that will call for abolishing the appointed Redevelopment Agency Commission, putting the San Francisco Board of Supervisors in charge and ending the City’s relationship with Lennar.

San Francisco writer Ann Garrison writes for the San Francisco Bay View, Examiner.com, Digital Journal, OpEdNews, Global Research, Colored Opinions and her new blog, Ann.ie. She is also active in international Green Party organizing, with special focus on supporting the Democratic Green Party of Rwanda, which is struggling for official recognition and a free and fair election in Rwanda in August 2010. She can be reached at anniegarrison@gmail.com.