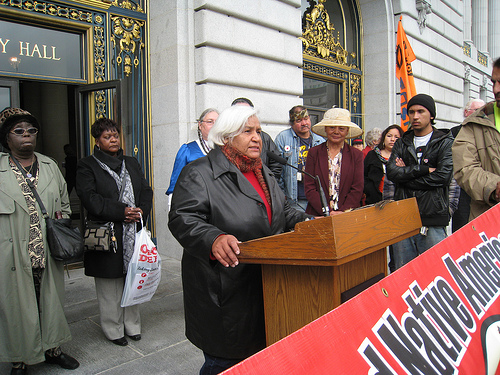 On Tuesday, Jan. 12, POWER leaders and allies turned in written comments in response to Lennar’s Environmental Impact Report (EIR) for their proposed development on the Hunters Point Shipyard and Candlestick Point. After nearly two months of reading, study, research and discussion of the over 4,000-page document, we focused on six core issues that are at stake in the environmental review process. These include the carcinogens and radiological contamination at the Shipyard; the dangers of liquefaction; climate change and sea level rise; transportation impacts from the proposed development; the connection of the development to the existing community; and the preservation of historic Ohlone sites.

What’s next? POWER’s Bayview Project is launching a mass media campaign to win broad public support for the environmental justice struggle of Bayview families. We are gearing up for late spring when the Planning Department will release their responses to our comments and begin moving the Candlestick Point-Hunters Point Shipyard project toward the public hearing and approval process before the San Francisco Board of Supervisors.

The following comments were facilitated by Technical Assistance Services for Communities (TASC), a program that provides independent educational and technical assistance to communities impacted by Superfund sites.

The Navy is proposing to transfer ownership and control of the property at Hunters Point Shipyard (HPS) Phase II portion to the San Francisco Redevelopment Agency on an early transfer basis before remedial activities are completed. The San Francisco Redevelopment Agency can then transfer the remedial obligations to Project Applicants [Lennar]. This will ultimately result in construction of the proposed redevelopment and occupancy of redevelopment structures and units while remediation activities are still ongoing at HPS Phase II.

The San Francisco Redevelopment Agency would be responsible for remedial activities from the time of transfer under the terms of the Early Transfer Cooperative Agreement. If the San Francisco Redevelopment Agency transfers ownership to a Project Applicant, the Project Applicant would then be responsible for the remaining remediation under an Administrative Order on Consent.

The early transfer of property in HPS Phase II requires that prior to transfer of the property that is not completely remediated, the Navy must “insure that the property is suitable for the intended use and consistent with protection of human health and the environment.” In addition, the Navy has to complete all radiological cleanup activities on each parcel in HPS Phase II and obtain approved Record of Decisions (RODs) for each parcel prior to transfer. Responsibility for remedial work not performed prior to the transfer would become the responsibility of the San Francisco Redevelopment Agency and/or Project Applicant. Navy funds would be provided to complete the Navy’s remediation obligations. The Navy retains ultimate responsibility for the site remediation.

Parcel B had an amended ROD finalized in February 2009. The draft ROD for parcels C and UC-2 were to be issued in December 2009 and the final RODs are proposed to be signed within 2010.

The ROD for Parcel D (D-1, D-2, G and UC-1) was issued in 2009. The draft Proposed Plan and draft ROD for Parcels E and E2 are expected in the 2010-2011 time frame. Parcel F is anticipated to have a draft Proposed Plan and draft ROD issued in 2012 or 2013. On page III.K-81, the text states that the RODs are expected to be final for all parcels of HPS Phase II by summer 2012. This does not agree with the text for Parcel F (page III.K-26), which indicates a draft ROD is anticipated to be issued in 2012 or 2013. This time frame for the draft ROD, not the final ROD, is based on information from the California Department of Toxic Substances Control (DTSC) data from Hunters Point Naval Shipyard Parcel F and is later than the date presented on page III.K-81.

If the parcels are transferred immediately after the RODs are finalized, then the San Francisco Redevelopment Agency and/or Project Applicant will be responsible for developing the Remedial Design document, having the document reviewed and approved, and conducting the Remedial Actions required in the ROD. The remedial work could be extensive on each parcel.

In addition, U.S. Environmental Protection Agency (EPA) oversight of remedial actions being performed by contractors for the San Francisco Redevelopment Agency and Project Applicants will require additional agency resources and could result in less oversight than is currently occurring with the Navy being responsible for the remedial actions.

Areas of concern with early transfer

2. Exposure of occupants in the redeveloped locations and sites.

The text indicates that hazardous materials, their “use, storage and disposal, are subject to numerous laws and regulations. In most cases, the laws and regulations pertaining to hazardous materials management are sufficient to minimize risks to human health and the environment, except where site-specific conditions warrant additional considerations.”

There is the potential to encounter previously unidentified hazardous materials during excavation for remediation or redevelopment construction activities. The potential exists that the hazardous waste materials will negatively impact the human health of workers, community members and school students, teachers and staff and the environment. This issue could be addressed in the Environmental Impact Report.

According to the Environmental Impact Report, “development and occupancy of some portions of the Project would occur at the same time as demolition and construction would occur in other portions of the Project site. The Environmental Impact Report contends that “relatively few individuals would be exposed to the potential contaminated materials during the initial construction” phase of redevelopment. However, “during later periods of construction … an increasingly greater number of people could be affected by construction activities involving the disturbance of contaminated soils or groundwater.” “This could be a particular issue in the residential portions of HPS Phase II where construction in contaminated soils may occur near occupied residential units.”

Schools within one quarter mile of Hunters Point Shipyard

The Muhammad University of Islam (MUI), a year-round elementary school, is located adjacent to the Hillside portion of HPS Phase I. It is within one quarter mile of the westernmost portion of the project boundary. “Demolition or renovation of existing structures in HPS Phase II could result in potential exposure of students, teachers, staff and visitors at MUI to hazardous building materials during construction, without proper abatement procedures.”

Site remediation occurring at the same time as early transfer, redevelopment and occupancy may lead to unacceptable exposure of occupants to hazardous materials disturbed by remedial activities and construction activities.

The Bret Harte Elementary School is within one quarter mile of the Alice Griffith public housing development. Demolition or renovation at the Alice Griffith public housing development could “result in potential exposure of students, teachers, staff and visitors at the school to hazardous building materials during construction, without proper abatement procedures.”

The Environmental Impact Report could detail a mechanism for immediate notification of the two schools of any failures of the contractors on Candlestick Point and HPS Phase II to comply with the regulations and guidelines and also to advise the schools of measures that can be taken to protect the health of the students, teachers, staff and visitors. A notification mechanism would greatly assist in human health protection at the two schools.

The Environmental Impact Report did not evaluate and assess the cumulative impacts of exposure to human and ecological receptors and the environment as a result of exposure to hydrocarbons, volatile and semi-volatile organic compounds, PCBs, pesticides, heavy metals, asbestos and radionuclides.

The Environmental Impact Report also did not establish a mechanism for notification and education of community members and school students, teachers, staff and visitors occupying the property adjacent to the site about the proper precautions and procedures to avoid and reduce their exposure to hazardous materials from remedial and redevelopment activities ongoing at the site.

The Environmental Impact Report also did not develop and provide for dissemination of information on institutional controls and exposure avoidance mechanisms for new occupants on the site, workers constructing development units on the site, and shoppers, workers and visitors at business units on the site. The redevelopment and utilization of the site while site remediation is still underway has the potential to expose members of the public to hazardous materials being remediated. In addition, even after the site remediation is complete, the site will still contain hazardous materials under the surface of the site. Individuals living, working and visiting the site must be aware of the situation and understand the requirements to prevent exposure to the hazardous materials remaining on the site.

The Environmental Impact Report did not evaluate and assess the cumulative impacts of exposure to human and ecological receptors and the environment as a result of exposure to hydrocarbons, volatile and semi-volatile organic compounds, PCBs, pesticides, heavy metals, asbestos and radionuclides.

Finally, the Environmental Impact Report did not provide for adequate oversight and enforcement of the terms of the Early Transfer Cooperative Agreement, Administrative Orders on Consent, and the RODs and Remedial Designs for each parcel on the Candlestick Point and HPS Phase II sites. This lack of adequate oversight and enforcement could result in exposure of humans and the environment to hazardous materials on the sites and potentially flawed remedies being implemented.

Who is Dr. Subra?

“For two decades, Wilma Subra, a chemist by trade and environmental crusader by reputation, has helped more than 800 communities – many of them poor towns along the Mississippi River – take on or fend off polluters,” reports the Associated Press in a story dated Oct. 21, 2001. “‘She’s like a champion when she goes into a community,’ says Marylee Orr, head of the Louisiana Environmental Action Network, an umbrella of grass-roots groups. ‘She’s larger than life.’

“She is a scientist who has lectured at Harvard, testified before Congress, helped draft environmental laws, consulted on cancer clusters and toxic spills, fought sugar cane growers and landfill operators – and, in return, joined the elite club of MacArthur Foundation ‘genius’ grant recipients.

“Subra says one of the most persistent problems she has faced has been environmental racism – a tendency for polluting industries to locate in poor, minority areas where they think residents won’t put up a fight.”