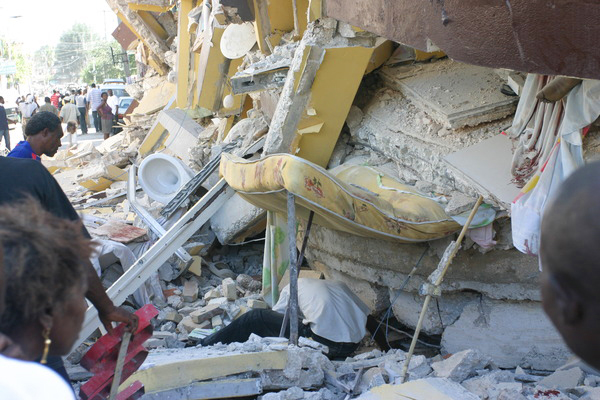 Two. Do not allow U.S. military in Haiti to point their guns at Haitians. Hungry Haitians are not the enemy. Decisions have already been made which will militarize the humanitarian relief – but do not allow the victims to be cast as criminals. Do not demonize the people.

Three. Give Haiti grants as help, not loans. Haiti does not need any more debt. Make sure that the relief given helps Haiti rebuild its public sector so the country can provide its own citizens with basic public services.

Five. President Obama can enact Temporary Protected Status for Haitians with the stroke of a pen. Do it. The U.S. has already done it for El Salvador, Honduras, Nicaragua, Sudan and Somalia. President Obama should do it on Martin Luther King Day.

Do not allow U.S. military in Haiti to point their guns at Haitians. Hungry Haitians are not the enemy. Do not allow the victims to be cast as criminals.

Six. Respect human rights from Day One. The U.N. has enacted Guiding Principles for Internally Displaced People. Make them required reading for every official and non-governmental person and organization. Non-governmental organizations like charities and international aid groups are extremely powerful in Haiti – they too must respect the human dignity and human rights of all people.

Seven. Apologize to the Haitian people everywhere for Pat Roberts and Rush Limbaugh.

Eight. Release all Haitians in U.S. jails who are not accused of any crimes. Thirty thousand people are facing deportations. No one will be deported to Haiti for years to come. Release them on Martin Luther King Day.

Nine. Require that all the non-governmental organizations which raise money in the U.S. be transparent about what they raise and where the money goes, and insist that they be legally accountable to the people of Haiti.

Ten. Treat all Haitians as we ourselves would want to be treated.

Bill is legal director at the Center for Constitutional Rights and a law professor at Loyola University New Orleans. He is a Katrina survivor and has been active in human rights in Haiti for years with the Institute for Justice and Democracy in Haiti. He can be reached at quigley77@yahoo.com.