by Tiny, aka Lisa Gray-Garcia 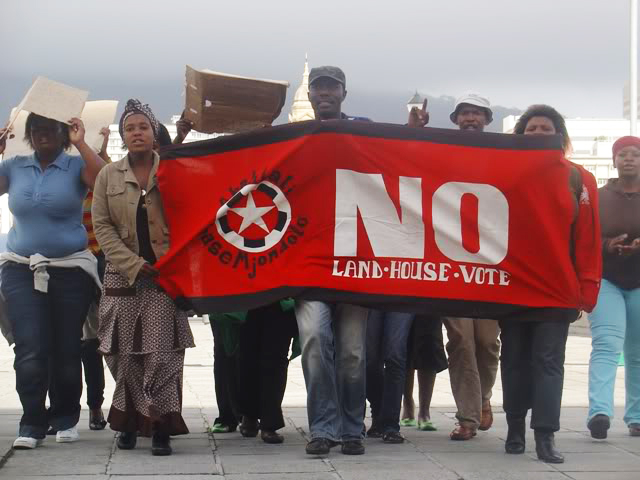 “I conclude that section 16 of the Slums Act is inconsistent with the Constitution and invalid.” – Constitutional Court of South Africa

When I heard about the revolutionary resistance of our South African brothers and sisters in Abahlai baseMjondolo (The Shack Dwellers Union) in South Africa, a revolutionary group of landless folks in Capetown and Durban, South Africa, who successfully overturned the deadly Amerikkkan-style criminalizing legislation called “The Slums Act,” which would have given South African police the ability to legally demolish, destroy and evict poor people from their shacks without notice, I cried.

As a person whose life has been rife with the terror of eviction, displacement, landlessness and criminalization, I was devastated by the stories of destruction of poor people’s homes in South Africa and equally inspired by the resistance of the young people who organized, hit the streets, chanted, danced and sang for freedom – for post-apartheid Amandla – in 2009 and eventually overcame that terror and won!

I remembered the power of the poverty scholars I had met from the Shack Dwellers Union. Scholars who protested, organized and led resistance from the grassroots.

Scholars like Maswi, a young revolutionary care-giving brother and visionary. In his soft voice he related the struggle of his family and community to deal with the deadly war on the poor that was raging in post-apartheid South Africa.

The new struggle in South Africa, according to Maswi and his fellow freedom fighters, is over the rights of poor people to be housed, to be listened to, to not be incarcerated. “It’s not racism any more; it’s poverty,” he had told me in an interview in August of this year.

From the Bayview to the Bayou, poor folks of color across the globe struggle with Amerikkkan-style gentrification and criminalization. For the last few years, shack dwellers in South Africa have come home from work and school only to find their homes have been demolished. And then if they fight back, the government turns guns on them.

This current push of deadly destruction by the South African government has been fueled by the transnational corporate interests in South Africa trying to build the World Cup stadium for the 2010 World Cup.

When I spoke with Maswi, he explained how the South African Constitution stated that no one can be evicted without due process once they have lived in a place for over 24 hours, but that in the push to be the new corporate Amerikkkan-style “clean” city, there is no room for poor people – for the slums – and so no one follows the constitution. The Slums Act was the going to be the final tool to push poor folks into the streets, the jails or death.

Currently, poor children found living on the streets are put in jail for weeks at a time if tourists are expected to come to Durban. Mazwi’s stories of removal and criminalization reminded me of the ways that encampments of landless folks in the Bay Area are arrested and washed away with high pressure power washers when they are found in settlements under the freeways, under the bridges, in doorways and other outside residences. The ways that poor folks in New Orleans face constant and ongoing gentrification and displacement, the ways that we in the Bayview, the Mission , Oakland and Richmond are constantly at risk of losing whatever little crumb we are able to attain at the hands of large corporate interests like Lennar and Chevron.

But mostly what I learned from Maswi and his fellow revolutionaries is that we, the poor, the disabled, the indigenous, the migrant, the silenced, the incarcerated, the profiled, the displaced, must NOT give up! That we do have power and that we will, if we are focused and working truly in coalition with each other, triumph!

Tiny – or Lisa Gray-Garcia – who describes herself as “poverty scholar, daughter of Dee and welfareQUEEN,” is the consummate organizer, co-founder with her mother of POOR Magazine and its many offspring and author of “Criminal of Poverty: Growing Up Homeless in America,” published by City Lights.  She can be reached at deeandtiny@poormagazine.org.

Abahlali baseMjondolo (Shack Dwellers Union) is the largest social movement of the poor in post-apartheid South Africa. The movement’s key demand is for “Land and Housing in the City” but it has also successfully politicized and fought for an end to forced removals and for access to education and the provision of water, electricity, sanitation, health care and refuse removal as well as bottom up popular democracy. Amongst other victories, the Abahlali have democratized the governance of many settlements, stopped evictions in a number of settlements, won access to schools and forced numerous government officials to “come down to the people.” For more information, visit http://www.abahlali.org.

A year ago, in January of 2009, poor South Africans in the Anti-Eviction Campaign, in alliance with Abahlali baseMjondolo and the Homeless People’s Movement, launched a campaign to boycott the general elections with the slogan “No Land No House No Vote.” One of the leaders, Mncedisi Twalo, explained: “As the poor people of this country, we will not be voting for our further suffering, joblessness and homelessness. … We will not participate in what is now a neo-colonialist state. We will keep pressuring whoever takes up public office.”

For Cynthia McKinney’s report on these issues with videos, see “My visit to Cape Town, South Africa.” 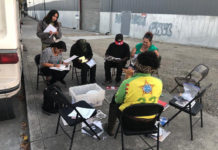