Adoptees of Color Statement on Haiti 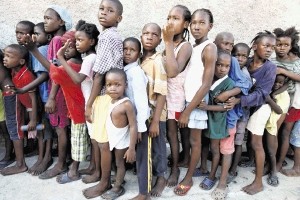 This statement reflects the position of an international community of adoptees of color who wish to pose a critical intervention in the discourse and actions affecting the child victims of the recent earthquake in Haiti. We are domestic and international adoptees with many years of research and both personal and professional experience in adoption studies and activism. We are a community of scholars, activists, professors, artists, lawyers, social workers and health care workers who speak with the knowledge that North Americans and Europeans are lining up to adopt the “orphaned children” of the Haitian earthquake and who feel compelled to voice our opinion about what it means to be “saved” or “rescued” through adoption.

We understand that in a time of crisis there is a tendency to want to act quickly to support those considered the most vulnerable and directly affected, including children. However, we urge caution in determining how best to help. We have arrived at a time when the licenses of adoption agencies in various countries are being reviewed for the widespread practice of misrepresenting the social histories of children.

There is evidence of the production of documents stating that a child is “available for adoption” based on a legal “paper” and not literal orphaning as seen in recent cases of intercountry adoption of children from Malawi, Guatemala, South Korea and China. We bear testimony to the ways in which the intercountry adoption industry has profited from and reinforced neo-liberal structural adjustment policies, aid dependency, population control policies, unsustainable development, corruption and child trafficking.

For more than 50 years, “orphaned children” have been shipped from areas of war, natural disasters and poverty to supposedly better lives in Europe and North America. Our adoptions from Vietnam, South Korea, Guatemala and many other countries are no different from what is happening to the children of Haiti today. Like us, these “disaster orphans” will grow into adulthood and begin to grasp the magnitude of the abuse, fraud, negligence, suffering and deprivation of human rights involved in their displacements.

We uphold that Haitian children have a right to a family and a history that is their own and that Haitians themselves have a right to determine what happens to their own children. We resist the racist, colonialist mentality that positions the Western nuclear family as superior to other conceptions of family, and we seek to challenge those who abuse the phrase, “Every child deserves a family,” to rethink how this phrase is used to justify the removal of children from Haiti for the fulfillment of their own needs and desires.

Western and Northern desire for ownership of Haitian children directly contributes to the destruction of existing family and community structures in Haiti. This individualistic desire is supported by the historical and global anti-African sentiment which negates the validity of Black mothers and fathers and condones the separation of Black children from their families, cultures and countries of origin.

As adoptees of color, many of us have inherited a history of dubious adoptions. We are dismayed to hear that Haitian adoptions may be “fast-tracked” due to the massive destruction of buildings in Haiti that hold important records and documents. We oppose this plan and argue that the loss of records requires slowing down of the processes of adoption while important information is gathered and re-documented for these children.

Removing children from Haiti without proper documentation and without proper reunification efforts is a violation of their basic human rights and leaves any family members who may be searching for them with no recourse. We insist on the absolute necessity of taking the time required to conduct a thorough search, and we support an expanded set of methods for creating these records, including recording oral histories.

This individualistic desire for ownership of Haitian children is supported by the historical and global anti-African sentiment which negates the validity of Black mothers and fathers and condones the separation of Black children from their families, cultures and countries of origin.

We urge the international community to remember that the children in question have suffered the overwhelming trauma of the earthquake and separation from their loved ones. We have learned first-hand that adoption – domestic or intercountry – itself as a process forces children to negate their true feelings of grief, anger, pain or loss, and to assimilate to meet the desires and expectations of strangers. Immediate removal of traumatized children for adoption – including children whose adoptions were finalized prior to the quake – compounds their trauma and denies their right to mourn and heal with the support of their community.

We affirm the spirit of cultural sovereignty, sovereignty and self-determination embodied as rights for all peoples to determine their own economic, social and cultural development included in the Convention on the Rights of the Child; the Charter of the United Nations; the U.N. Declaration on the Rights of Indigenous Peoples; and the International Covenant on Economic, Social and Cultural Rights.

The mobilization of European and North American courts, legislative bodies and social work practices to implement forced removal through intercountry adoption is a direct challenge to cultural sovereignty. We support the legal and policy application of cultural rights such as rights to language, rights to ways of being and religion, collective existence, and a representation of Haiti’s histories and existence using Haiti’s own terms.

We offer this statement in solidarity with the people of Haiti and with all those who are seeking ways to intentionally support the long-term sustainability and self-determination of the Haitian people. As adoptees of color we bear a unique understanding of the trauma and the sense of loss and abandonment that are part of the adoptee experience, and we demand that our voices be heard.

All adoptions from Haiti must be stopped and all efforts to help children be refocused on giving aid to organizations working toward family reunification and caring for children in their own communities. We urge you to join us in supporting Haitian children’s rights to life, survival and development within their own families and communities.

This statement appears on the website of the Adoptees of Color Roundtable, an organization born out of an informal discussion group of trans-racial adoptees from Korea and Africa meeting in Oakland. They write, “ACR came about because many adoptees of color have worked for years, both struggling against and celebrating the social justice ramifications of the global institution of adoption, yet we were concerned about the lack of an international, unified voice of adult adoptees of color who have a critique of this system.” For more information or to get involved, email info@adopteesofcolor.org.