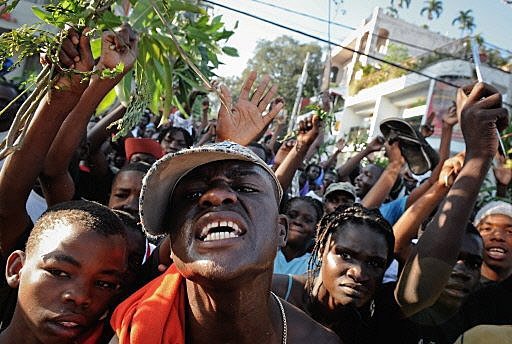 You can walk down many of the streets of Port au Prince and see absolutely no evidence that the world community has helped Haiti.

Twenty three days after the earthquake jolted Haiti and killed over 200,000 people, as many as a million people have still not received any international food assistance.

On Feb. 4, the U.N. World Food Program reported they had given at least some food, mostly 55 pound bags of rice, to over a million people. The U.N. acknowledges that it still needs to reach another 1 million people. The 55 pounds of rice are expected to provide a two-week food ration for a family. Beans and cooking oil are scheduled to come later.

The Associated Press reported that people in Haiti at small protests were holding up banners reading, “Help us, we’re starving.”

Over a million people are displaced. About 10,000 families are in tents. The rest are living under sheets, blankets and tarps.

Haiti and the United Nations estimate 250,000 children under the age of 7 are living in temporary housing. Most need vaccinations.

Flavia Cherry of the Caribbean Association for Feminist Research and Action this week witnessed a pregnant double amputee give birth on the ground in one of the tent camps without any medical assistance at all. “This poor mother had nothing: no milk, no clothing for the baby, nothing!”

Even people who can afford to purchase food are having a difficult time. A 55-pound bag of rice costs 40 percent more today than it did before the earthquake. Dr. Louise Ivers, a Partners in Health physician in Port au Prince, reports a 25-kg (55-pound) bag of rice that sold for $30 U.S. dollars (1,207 Haitian Gourdes) before the quake now costs $42 U.S. dollars (1,690 Haitian Gourdes).

The World Food Program reports prices are still rising and people outside the earthquake zone are having difficulty meeting their basic food needs.

Twenty three days after the quake.

Bill Quigley just returned from Haiti. He is legal director at the Center for Constitutional Rights. His email is Quigley77@gmail.com.