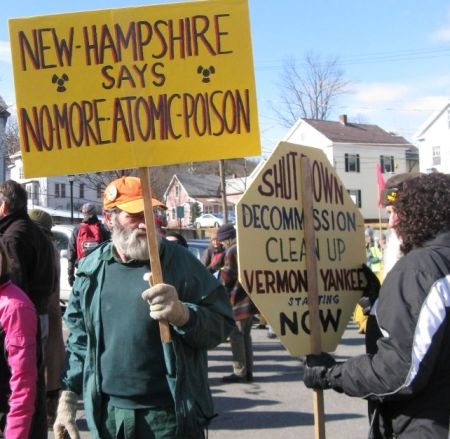 In the depths of a near-Depression, the Vermont Senate on Wednesday voted overwhelmingly for health and safety over jobs and tax revenue when it chose not to renew Vermont Yankee nuclear power plant’s operating license when it expires in 2012. Unless Entergy, the plant’s owner, can stop the leaks of radioactive tritium, the 26-4 vote means the plant will shut down in March 2012, taking 650 jobs and $9 million in tax revenue with it.

Vermont Yankee is a 38-year-old decaying nuclear reactor running flat out at 120 percent of capacity in Vernon, Vermont. It is about 30 miles north of Mount Holyoke College. A few miles further south are Amherst College and hundreds of other colleges and prep schools.

Millions of people are within its range. Should Vermont Yankee lose enough coolant to expose the glowing uranium core to air, it catches on fire and the hydrogen gas manufactured normally in the reactor explodes.

Vermont Yankee is sitting on top of its own outhouse-toilet-in-the-woods, a 100m by 50m by 9m (m = meter, or about 39 inches) underground “lake” of highly radioactive reactor coolant vigorously pumped there by Vermont Yankee itself already.

This poisonous lake is about the size of a football field and 35 feet deep – maybe even bigger, according to Arnie Gunderson, a former nuclear engineer, nuclear company executive and nuclear consultant to the Vermont Senate.

What’s more, the approximately 1,900 thermal megawatt reactor will supply as much power as is necessary to pump ever more scalding hot radioactive coolant to the football field sized underground lake.

As is usual, an obliging and well paid Nuclear Regulatory Commission (NRC) sees nothing unusual in the overall situation. The NRC is a federal agency in Washington, D.C., far removed from the woods of New England.

The NRC has officially placed 27 of America’s 104 big nuclear hot water heaters in the leak reactor coolant category, though it is known that all nuclear reactors are designed to leak even when operating normally.

All 11 big nuclear reactors in the D.C.-Chesapeake Bay area are leaking reactor coolant. East Coast writer Cathy Garger exposed this D.C. area scandal – not the laid back and easy going national anti-nuke groups like Nuclear Information and Resource Service (NIRS), Beyond Nuclear or any of the many others in the 17 million person greater D.C. metro Chesapeake Bay Area. 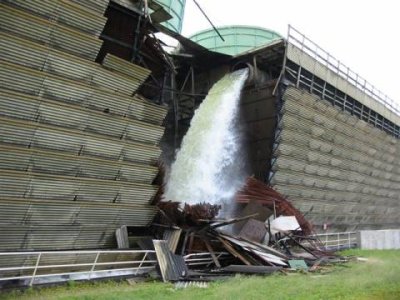 It is unknown at this stage if all the Vermont Yankee reactor coolant will gush out into the underground reactor coolant lake or not. According to ABC News, two environmental organizations, Conservation Law Foundation and the Vermont Public Interest Research Group, have “asked the U.S. Justice Department to launch a criminal probe of Vermont Yankee nuclear plant officials, saying they had provided false information under oath and operated the plant with ‘careless disregard’ of the potential for leaking radioactive substances.”

On Jan. 7, Vermont Yankee officials announced that the plant was leaking tritium into the groundwater and the following week it was revealed that they had lied to state regulators and lawmakers – under oath – “by saying the plant did not have the sort of underground piping that could carry tritium,” ABC News reported. State Attorney General William Sorrell has launched a criminal fraud investigation.

Ironically, Vermont Yankee’s threat to human health and the environment and its owner’s attempted coverup made news at the same time President Obama took note of the fine job America’s nuclear reactors are doing by approving the all necessary loan guarantees to a Southern company to build two more big reactors in Georgia to heat water for electricity.

The NRC is expected to play ball and approve the reactor applications for unapproved reactor designs. Loan guarantees are necessary since Wall Street and private bankers refuse to fund the big reactors. Obama says he’s willing to approve loan guarantees in excess of $50 billion to fund nuclear power.

2. “Nuclear power plants and other large nuclear facilities in the United States” by Ace Hoffman of Animated Software, San Deigo.

3. “Another DC Area Stand Down – As Radioactive Groundwater Due to Hit Chesapeake Bay” by Cathy Garger, Axis of Logic, Jan. 3, 2010.

Bob Nichols is a Project Censored Award winner and correspondent for the San Francisco Bay View newspaper. Nichols reports on the two nuclear weapons laboratories in the Bay Area, war and nuclear topics. He can be reached at duweapons@gmail.com.