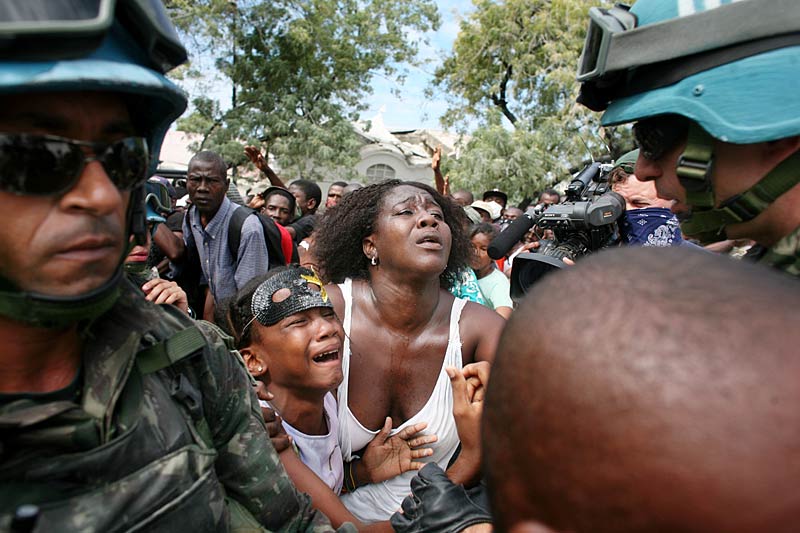 Today, on the one month anniversary of the earthquake in Haiti, I went all over Port au Prince and saw the devastation firsthand and the occupation by Brazil under the guise of the U.N., and of course the U.S.A. I rode through Port au Prince all day and didn’t see one act of recovery going on.

I haven’t left Port au Prince. Here it looks like the city was hit with an atomic bomb. All through the city you could smell dead bodies and see people going through the rubble lookin for scraps of metal to build a shanty-house and for anything that can be eaten, drunk or sold.

I don’t see where the millions of dollars that have been raised for Haiti is going. Everywhere people is starving. Me and my comrades gave some of the most desperate some money, but the thing is that it might help them today; what about tomorrow?

We been staying at a makeshift hospital run by some white so-called American missionaries. Today at the house I witnessed my first act of Jim Crow-type racism from so-called friends on this particular trip.

Haiti is like a time machine. It’s like 1920 here in terms of the apartheid type of relationships that the whites have with the Blacks. The white woman of “God” that runs the house says that Haitians can’t come in the house from their shantytown in the backyard after the hospital closes, but check this out: Multiple dogs have free reign all over the property. So in other words, these dogs are more important than the Haitians – including the hungry babies, the old people, the wounded and maimed and regular everyday people.

One of the members of our delegation was told not to feed the Haitians in the tent city in the backyard because they already eat once a day. The issue is, why do they think that they can determine who I share my food with? The house is full of white people who have free reign to eat as much as they want, and whenever they want.

One of the members of our delegation was told not to feed the Haitians in the tent city in the backyard because they already eat once a day.

The second issue is that when we went to Port au Prince we had a 19-year-old Haitian translator named Gady who helped our team. When we got back, the rooster-neck nun who is ultimately in charge of the house told him that he can’t be in the house, although we met him in the house the day before and hung out and listened to music to about 1 a.m. 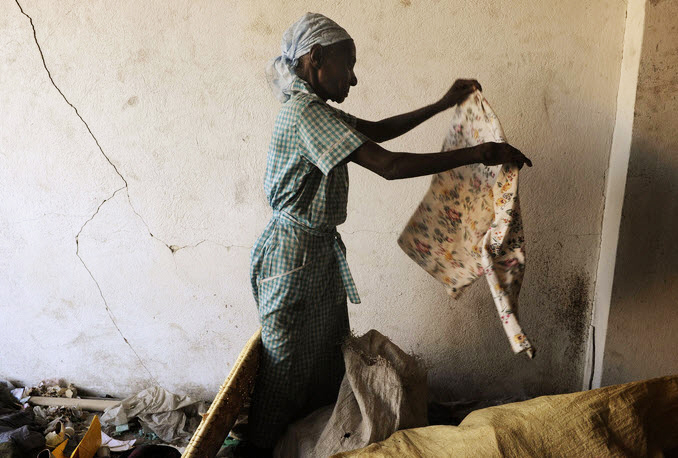 We asked why, and she told us he wasn’t a good translator. I told her he did great with us, from 10 a.m. to 4 p.m. She told me he doesn’t know enough English medical terms to assist the doctors. I informed her that my team consists of journalists, and we didn’t need him to know English medical terms.

She then quickly said there were other reasons, then told us that she just didn’t want him in the house, and if we needed a translator, contact her and she would hook it up. Most of the translators that I met were very subservient, except ours, and that’s why we got along.

She kicked him out, and we went out the house after him and paid him a third of what he would make in a month as a translator, because we realize how hard it is to find money, water and food, let alone a regular job.

I’m currently writing this from the house, and God knows I wish I had somewhere else to go out here rather than deal with these undercover racists. I don’t, so like my Haitian “auntie” told me, I’m supposed to see all of this so I can report it.

On another note, most of the Black people from the U.S. out here that I have met are complicit in this Jim Crow racism. They act like they don’t see it because it is not affecting them. These dumb ass people don’t recognize that these same crackers were doing this to their grandparents 60 years ago. It’s like Malcolm taught us, when he talked about the house slave and the field slave.

Like my Haitian “auntie” told me, I’m supposed to see all of this so I can report it.

This is my first report, on my first full day here. There is more to come, so stay tuned …

Editor’s note: POCC Minister of Information JR and Chris Zamani, M.D., who were political organizing comrades years ago, have reunited to form the Haiti Media-Medical Team to minister to the needs of the people of Haiti and tell their truth. With Minister JR on the media team are filmmaker Angela Carroll and photojournalist Siraj Fowler; with Dr. Zamani on the medical team are a nurse and a mental health therapist. They arrived in Haiti Feb. 11 thanks to the generous donations of many good folks, most notably Mos Def, Kamel Bell of Ankh Marketing, Pierre Labossiere of the Haiti Action Committee and Walter Riley of the Haiti Emergency Relief Fund. Their reports will be posted here as soon as they are received.