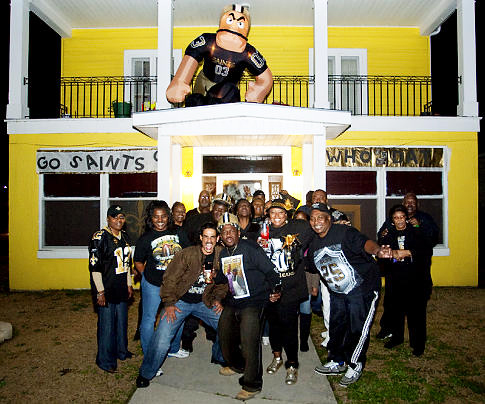 Remember that after Hurricane Katrina, Speaker of the House Republican Rep. Dennis Hastert said, “It looks like a lot of that place could be bulldozed.” But now Hastert is on the political scrap heap and New Orleans is the home of the Super Bowl champs.

I’m not sure whether it feels like a dream or positively preordained. If nothing else, it’s an emotional release from all the idiocy that surrounded the big game. From the military cheerleading, to Tim and Pam Tebow’s vapid Focus on the Family ad, to the Who’s halftime act which clearly violated the Geneva accords: None of it matters now. We’ll go back to building resistance to Obama’s wars. Tim Tebow will go back to being the next Eric Crouch. And the Who will go back to Madame Tussaud’s. For right now, it just doesn’t matter because the New Orleans Saints won the damn Super Bowl.

Quarterback Drew Brees will get a lot of love after a 32-for-39 MVP performance. But this was no one-man-band. This was about a head coach in Sean Payton who, with his team down 10-6, exercised a wicked sense of daring and ordered the first non-fourth quarter onside kick in Super Bowl history. This was about a Saints defense that bent but didn’t break, freezing Peyton Manning’s Colts at 17 points. This was about an offense that was crisper than potatoes at the bottom of a deep fryer. This was also about a stadium in Miami that sounded nearly as loud as the Louisiana Superdome.

But most of all this was about a Crescent City that refuses to die. As Leigh, a friend and blogger from New Orleans, said to me: “The energy in this entire town is incredible. People here have been ready for this for decades … but the way the media is treating the Saints as underdogs isn’t a surprise to any of us. The people of New Orleans have been subjected to those attitudes for a long time ourselves, and we still are in too, too many ways, but we’re still here.

“And those who are still unable to return here due to the displacement caused by the storm, or the recession, or other circumstances – they’ll return in one way or another, because this is a town that can teach the rest of this country how to live. It always has, and it always will, despite it all.”

Leigh’s pride runs across NOLA tonight. The same week that Education Secretary Arne Duncan outrageously called Hurricane Katrina “the best thing that happened to the education system in New Orleans,” the city has delivered a counterpunch to Duncan as well as any and all doubters.

Their ascendancy means that the arduous post-hurricane recovery work has gotten more publicity in the last two weeks than it’s received in the last two years. This is maddening but many New Orleans residents wouldn’t have it any other way. As Saints linebacker Scott Fujita’s wife Jaclyn said, “The people of New Orleans love the Saints not because they provide a distraction from their fall but because they are a reflection of their rise.”

Community activist and former Black Panther Malik Rahim, who has lived in the city for three decades and still works in Algiers, told me: “I haven’t seen people this happy since Katrina. No question about it.” That doesn’t mean all – or even some – questions about the future of New Orleans are solved by a Saints Super Bowl win. Jobs, housing and the right of return for displaced residents still need to be at the forefront of everyone’s mind.

But it does mean that folks of the Big Easy are feeling fearless tonight. Every last person – from Bush to Brownie – who wrote this city off has to now bend down and kiss the ring. President Barack Obama, who often seems allergic to saying the words “New Orleans,” must now greet the team at the White House and acknowledge both the Saints and the city that bears their name. Even if tomorrow is unbearably hard, we have today. And today feels mighty fine.

Dave Zirin is The Nation’s sports editor. He is the author of “Welcome to the Terrordome: the Pain Politics and Promise of Sports” (Haymarket) and “A People’s History of Sports in the United States” (The New Press). His writing has appeared in the Los Angeles Times, Sports Illustrated.com and The Progressive. He is the host of Sirius/XM’s Edge of Sports Radio. Contact him at edgeofsports@gmail.com.