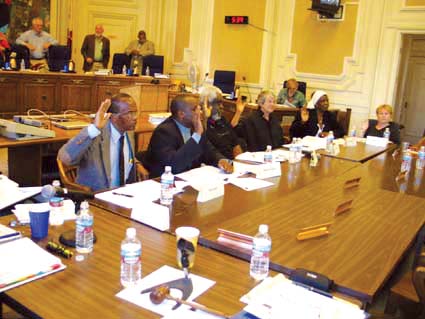 Berkeley – According to documents recently released online by the Office of the City Manager in Berkeley, the Berkeley Housing Authority (BHA) may receive kickbacks from a local non-profit housing developer in a scheme to privatize, revitalize and sell off its public housing. The scheme involves a vice president of consultant ICF International.

In May 2007, long-time Berkeley resident and Oxford Street homeowner Carole Norris was appointed to a four-year term as the chairperson of the BHA’s Board of Commissioners and remains so today. Norris is also listed as a vice president of ICF International in its San Francisco office, according to electiontrack.com’s report of a $1,200 political contribution made to state Assembly member Nancy Skinner on March 15, 2008.

A February 2008 Becky O’Malley editorial from the Berkeley Daily Planet mentions a letter signed by Norris on ICF letterhead suggesting that developers contribute as much as $3,600 to Nancy Skinner’s campaign. “This appears to be more than just a personal preference,” wrote O’Malley.

In addition, the Berkeley Daily Planet reported that Polly Quick of ICF International also made a political contribution to a Mr. L.A. Woods while he was running for a Berkeley City Council seat in 2008.

District 14 Assembly member Nancy Skinner represents Berkeley, and Berkeley’s public housing tenants may be reluctant to file a corruption complaint against the BHA and its board, including Norris or 3×3 committee members with BHA oversight, because of these political ties and contributions.

The conflict of interest section in ICF’s code of ethics states: “Employees shall avoid conflicts of interest, both in fact and in appearance, between his or her obligations to the Company and personal affairs. No employee is to have such an economic interest in or other relationship (including being a director or officer) with any person or firm with which the Company does business or competes, that would influence, or might reasonably be regarded as likely to influence, the employee in his or her actions on behalf of the Company.”

This includes strategy on revitalizing public housing, even though revitalization can displace low-income tenants and whole communities.

ICF lists Carole Norris as the contact person for the HCD team, even though she both works for ICF and serves as commission chair for the Berkeley Housing Authority. And that’s not all.

On Jan. 5, 2010, ICF announced it received a $9.9 million HUD contract, the fourth consecutive contract awarded to ICF Macro, an ICF International subsidiary, to provide HUD with estimates of the type and cost of errors associated with income certification and rent calculation for HUD’s housing assistance programs.

The BHA provides HUD assisted programs to the poor, and ICF’s Norris is directly involved in the policies and operations of those programs, while she is simultaneously a vice president with ICF International. This appears to be a clear conflict of interest.

On Dec. 31, 2009, BHA applied to HUD to dispose of most of its public housing. On Dec. 15, 2008, a year earlier, Norris had directed BHA board members to vote on initiating the disposal process.

Many of Berkeley’s African-American families may be evicted or displaced from their long time homes in the near future as a result. HUD is expected to approve the plan 100 days after the Dec. 31 application date.

In addition, the minutes of a Nov. 23, 2009, 3×3 Committee meeting report a discussion on how the BHA could get kickbacks from a non-profit housing developer after it sells its public housing. The minutes were recently released online by the City Manager’s Office.

The 3×3 Committee is a blend of two City Council members, the mayor and three BHA commissioners, who jointly oversee the policies and activities of the Berkeley Housing Authority. Their next meeting is scheduled for 6 p.m. March 2, 2010, at the North Berkeley Senior Center.

During the Nov. 23 meeting, a discussion on how to raise more revenue noted major differences in what the BHA collects from its LIPH (low-income public housing) program compared to what private landlords can make from the Section 8 program. With Project-Based Section 8 funding, the operator could use the difference between the costs of operation and payment from Section 8 to fund the debt service to renovate the units. There is a million dollar gap in their proposals to date, and more loans and revenues are being sought to finance the scheme.

In the Nov. 23 meeting, Mayor Bates asked if a for-profit or non-profit developer would take over the public housing units, and consultant Eric Novak indicated a non-profit developer is more likely. Scott Jepson stated, “After the loan is paid back, perhaps the developer could split some of the revenue from the Project-Based Section 8 with the BHA.”

Scott Jepson of the EJP Consulting Group and Eric Novak of the Praxis Consulting Group are highly paid BHA consultants directly involved in steering the BHA through the process of grabbing Berkeley’s public housing from the poor.

A non-profit developer might benefit from kickbacks to the BHA, but kickback schemes are illegal, and a number of people have been arrested and prosecuted for kickback schemes involving the nation’s public housing agencies.

The minutes also reveal that Berkeley Councilman Moore expressed concern that these actions will be seen as a way for Berkeley to get rid of its people of color, and he stated that families of color should be moved in after the buildings are renovated. Moore asked how much could a developer generate for the BHA, and Novak said $145,000 per year.

Moore noted that even if the current public housing tenants are given a Section 8 voucher to move, unless they have a security deposit and good credit, they cannot really move, but he ended up supporting the efforts to get rid of Berkeley’s precious public housing despite his concerns because he said HUD is underpaying Berkeley to provide public housing.

To allay committee members’ concerns at the Nov. 23 meeting, Norris stated that application being filed with HUD to dispose of the public housing just opens the door but does not require actual disposal even if HUD approves the application. Once again, ICF’s Norris is deeply involved in HUD’s housing assisted programs and policies at the BHA, while she is pushing hard to privatize and sell off Berkeley’s public housing.

Mayor Tom Bates said the BHA has done a great job and he was very pleased with Norris as chair and the rest of the board, according to the minutes.

ICF’s code of ethics and conflict of interest policies loom as the elephant in the room. The BHA wants to bail out of the public housing business and it may already be deeply involved in discussions with a local non-profit developer in an effort to take Berkeley’s public housing away from the poor. Getting kickbacks would make the deal even sweeter.

Public housing tenant Keith Carlisle recently stated, “We believe that a conflict of interest exists. Ms. Carole Norris, chair of the board of the Berkeley Housing Authority, works for ICF consultants. We understand that this company is a paid consulting firm hired by the City of Berkeley for advice. Part of this company’s mission is helping to provide ‘affordable housing strategies.’ We don’t feel that Ms. Norris has our best interests in mind. She is a major advocate for privatizing our family homes.”

In addition, over 20 public housing tenants in Berkeley signed a statement to HUD saying that through their organization, Residents Awareness in Action, they want to operate their housing themselves.

Berkeley’s public housing residents oppose the sale of their housing and invite the public to join them Saturday mornings from 10 a.m. to 12 p.m. at Intercity Services, 3269 Adeline St., Berkeley, for their weekly meetings in an effort to save their homes. Contact saveberkeleypublichousing@gmail.com.