From Port au Prince to the Capitol to the White House, she continues to lead efforts to help Haiti recover and rebuild 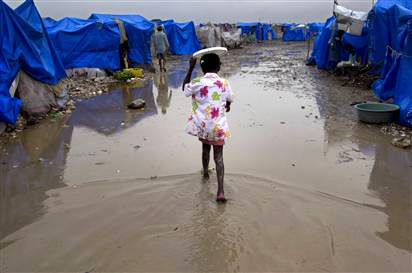 Washington, D.C. – The House of Representatives passed the Debt Relief for Earthquake Recovery in Haiti Act (H.R. 4573), authored by Congresswoman Maxine Waters, D-Calif., on Wednesday, March 10. This legislation directs the United States to seek the cancellation of Haiti’s debts to the World Bank, the International Monetary Fund (IMF), the Inter-American Development Bank (IDB) and other multilateral development institutions. The Senate is expected to adopt the congresswoman’s bill this week, clearing the way for President Obama to sign it into law.

“I am pleased that my bill to cancel Haiti’s debt held by multilateral development institutions is set to become law. Debt relief is essential for Haiti’s future, now I know that getting debt and insolvency advice it is essential. However, we must also keep in mind the immediate needs of survivors who, without adequate shelter, will be further subjected to the elements and to disease during the upcoming rainy season,” she said. She applauded the efforts of those who have provided assistance thus far and pledged, “I will be doing everything in my power to continue to work with them to alleviate the suffering and attend to the basic needs of the Haitian people.”

Having returned from Haiti earlier this week – her second trip there since the earthquake in January – the congresswoman continues to sound the alarm about the need to urgently provide more shelter to the hundreds of thousands of Haitians whose homes were destroyed. Many Haitians are living outdoors in makeshift camps, and the upcoming rainy season is putting them at greater risk of flooding and disease. The congresswoman has repeatedly called on the international community to deliver and distribute durable tents to Haitians and has raised the issue with Secretary of State Hillary Rodham Clinton and other officials.

“My second trip to Haiti since the earthquake only reaffirms what I’ve long known – the situation for hundreds of thousands of homeless Haitians is going to rapidly deteriorate when the heavy rains and hurricanes soon begin,” said Congresswoman Waters. “Malaria, typhoid, scabies and other highly infectious and deadly diseases are going to spread like wildfire unless a comprehensive plan is implemented to acquire thousands more durable shelter units and set them up safely, sustainably, and immediately.”

During her trip to Haiti last weekend, Congresswoman Waters:

• Brought food and supplies to Cité Soleil, the poorest neighborhood of Port au Prince, an area where residents have received little or no assistance from relief groups since the earthquake;

• Reviewed a food distribution operation in Pétionville led by a non-governmental organization;

• Toured a large camp that is housing approximately 12,000 survivors and was taken by locals to a camp unknown to relief workers where 700 people live. After Congresswoman Waters alerted USAID of the camp’s presence, USAID entered the camp into its database so it could be evaluated and will receive relief supplies moving forward;

• Discussed contracting opportunities for local workers with 150 Haitian business leaders and the USAID contracting officer, and reviewed some of the “jobs for cash” programs currently under way;

• Attended a “cluster” meeting at Bo-Jeux Parc where recovery and response efforts are coordinated and saw an army-grade medical tent she secured during her previous visit to Haiti being used by medical care providers to deliver babies; and

• Brought a U.S. seismologist to the country to study aftershocks and share information with Haitians about the potential for future disasters and what can be done to prevent widespread devastation.

“What really resonated with me during this trip was the stark reality of just how long it will take Haiti to recover and rebuild,” said Congresswoman Waters. “Many areas of Port au Prince are still not being regularly serviced by relief workers – and some camps are subsisting completely on their own. The coordination and organizational efforts are clearly under way, but I am well aware that it remains a work in progress. Much more must be done to provide all Haitians with food and clean water, secure shelter and economic livelihood.”

Congresswoman Waters was among a select group of members of Congress at an event March 10 at the White House with President Obama and Haitian President René Prevál, having been invited in recognition of her leadership on assistance for Haiti. Also attending were representatives of non-governmental organizations and foundations involved in the relief effort, Haitian-American community leaders and members of urban search and rescue teams from Los Angeles and other cities.