Haiti Action Committee is sponsoring a week of action in solidarity with the people’s movement to rid Haiti of the brutal system of exploitation and its kleptocratic president, Jovenel Moise, and to respond to the ongoing repression against Haiti’s grassroots movement. The week kicks off on Saturday, Sept. 28, at 3 p.m. at Eastside Arts Alliance, 2277 International Boulevard, in Oakland with an update and release of the new report by HAC and the National Lawyers Guild SF, “The Lasalin Massacre and the Human Rights Crisis in Haiti.”

Donations can be made through www.haitiemergencyrelief.org. Every dollar donated goes directly to support people on the ground in Haiti.

We are demonstrating in solidarity with the overwhelming majority of Haitians, whose continued resistance to an illegitimate, US-backed regime has given rise to years of sustained protest against stolen elections, government corruption, poverty, land grabs, rising prices and 15 years of UN-US military occupation. These are the conditions that drive people to leave Haiti and migrate elsewhere seeking a means to survive. Many live in the US under Temporary Protected Status (TPS), under threat by the Trump administration.

$4.2 BILLION has been stolen from government revenues. The international media has either ignored this struggle or reported it in a way that blames the demonstrators for “violence.”

As resistance to this regime intensifies, so does repression. Police and paramilitary forces have responded with bullets, teargas, imprisonment and, increasingly, massacres, aimed at wiping out Haiti’s grassroots Lavalas movement.

Over several nights in November 2018, state-sponsored armed forces tortured and/or murdered several hundred people, raped women in front of their families, and burned homes in Lasalin, a neighborhood of Port-au-Prince with a history of resistance.

The U.S. arms, funds and trains Haiti’s military and police, and only with U.S. support can this corrupt regime remain in power. The people of Haiti deserve the right to live without the daily threat of state-directed violence.

It is time for the U.S. to be held accountable for its continued support of the repressive regime now in power in Haiti. 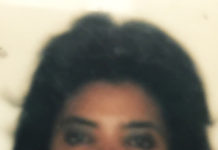