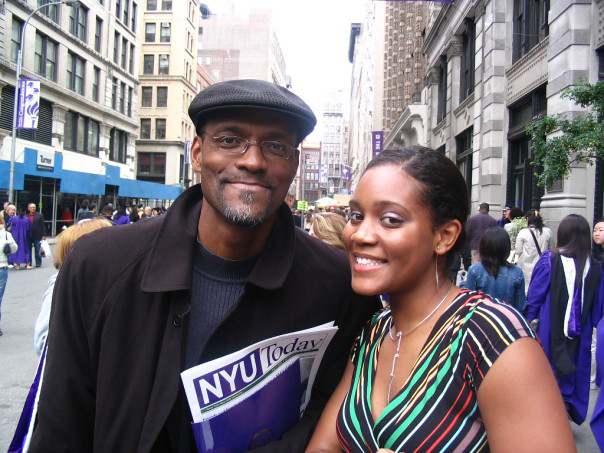 The characters’ stories in Chinaka Hodge’s debut as a playwright, “Mirrors in Every Corner,” capture a sense of tragedy lurking near all of us. From Rodney King to Oscar Grant, Loma Pieta to urban removal, one sits on the edge of her seat waiting for the wrecking ball to fall.

The title reminds me of the Sweet Honey in the Rock song about mirrors and, like the song, there really aren’t any mirrors plural, just one, singular. No one wants to see the other in this family; everyone is hiding behind Random … as in random history lessons, random acts of unkindness – if there is such a word – “random” as in not purposeful, aimless, misdirected and equally misguided.

If one sees the white girl born into a Black family as a metaphor – the not so inviting aspects of deep seated racism and self-hate that live in us all, then “Mirrors” is the bad luck that comes when the glass shatters, the ghost in the reflection looking back at you. Hum? What does a family do when a child white, as in Caucasian, is born into the family and her pigment doesn’t change as she grows older? How do you get beyond the surface when superficial is survival?

The movie “Race: Power of Illusion” is certainly apropos here. “Mirrors” brings to mind the true story of the South African white family who had a Black child. They get her classified as white and dare their neighbors to see her any different, but they do.

Is it the color of one’s skin or what one knows deep in one’s soul that makes one Black or white? What do you do when or if the two are incongruent, that is, the surface reading gets confused with the reality? Close one’s eyes and “Random” sounds like a Black girl. But one has to eventually open her eyes.

One would think the mother would know. One would think behind closed doors that no matter what the world knew or believed, truth would at least live there – but for Miranda, “Random” the anomaly never rests. The family plays bid whist, the suit wild, unnamed – which means control isn’t remotely possible – so big brother Watt, as in light bulb, tries to think his way into acceptance of things he can’t change or the wisdom to know the difference. Such clichés! Yet for this family there are no clichés.

For this family love isn’t enough. Blinded by Random’s whiteness, green eyes and blonde hair in the 20th century, post everything possible for America’s Negroes, they are stuck, as Random puts it, in antebellum West Oakland, a place the playwright knows intimately, as it is her home. And, for 80 minutes, it is ours too.

When one walks into the theatre the audience is struck by sensations of urban America, urban San Francisco Bay Area – there is aerial footage of West Oakland pre and post the 1989 earthquake. The twins, Ninth and Row, sit in baseball caps, As and Giants caps, and watch the World Series on TV when all of a sudden the room begins shaking. Dad, who is terminally ill and the baby in a cradle, don’t seem upset over the shaking. The mother and three other children sit at the table and play whist – the cure for what ails them.

Willie, who is trapped with her child, who she wills Black, lives in a world where ease is defined by how easily one fits into boxes that don’t fit. “Mirrors in Every Corner” means hiding is not an option because when one least expects it, there you are.

The West Oakland in “Mirrors” is the one you read about – drugs and fatherless homes – yet in Willie’s house, how they get there is not by the typical route, or maybe it is? All we know is Dad dies and Willie wants to disappear as well, but she has four children and they need her. What must slave mothers have felt when the last child looked like the oppressor. 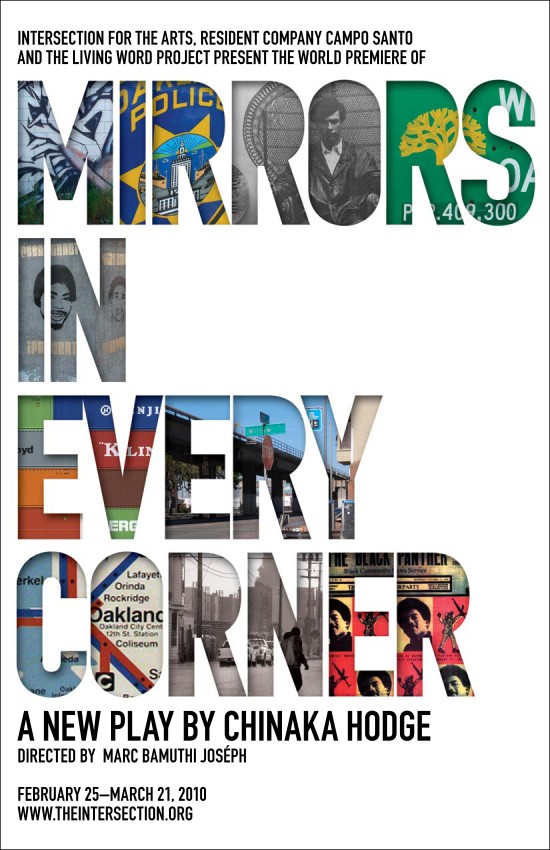 Innocence is an unexamined notion on paper until Random is born. She is a white girl first, Willie’s child second. She never belongs in this family – she upsets the balance – and they live sideways without the fourth wheel, tipped over, about to fall into the space between love, the corners where bright shining metal reflects images that don’t lie – racism, oppression, bigotry.

“The girl is white as crack,” her mom says of her as she then reflects on how this child in the cradle is going to have it so much easier than the rest of her family. Stereotypical Row, unemployed, sells penny bags of marijuana while his little sister gets ready to enter the University of San Francisco and his twin, Ninth, is stationed in Iraq at the start of the war. And then there is Watts, as in “riot and light bulb,” really smart, the man of the house at 10 when dad takes the “get out of life ‘free’ card.”

We aren’t certain how he is so lucky, but we find out at the end of the tale and this information jars the already leaning edifice that is “Mirrors.” What we have is a new Oakland, one where, Miranda (Random) says, her friends have to move out because they can no longer afford to live here.

Chinaka Hodge takes us on a journey I trust because the landmarks are so familiar. I remember the freeway falling, the bodies and cars crushed under the cement. I had friends who thought their cars tires flat as they drove on I-880, what was called the Nimitz Freeway. as it crumbled behind them. I remember walking West Oakland, looking down what is now Mandela Parkway, the renaming then a hope for a democratic and free Oakland. This was back when a few scrawny trees pushed up through the polluted landscape … the panhandle arid and vacant like squandered opportunities.

This is the West Oakland Chinaka grew up in. I remember meeting her with her dad at one of many meetings we called “Oakland revitalization.” She had her coloring book and toys, her legs too short to touch the floor. Aleta Canon was West Oakland’s City Council representative and I don’t remember who was mayor. Soon though, it was Elihu Harris.

“Mirrors” is a collage both literally and figuratively. Hodge’s play takes us on a journey one thinks is past, but in Miranda’s family we see how far from absolution we really are. What does a family do when anonymity is not an option? When a lynch mob lives inside one’s soul? Talk about reaching back to incarnation stories. No, “Mirrors” is not as complicated as I am making it seem. This is a stream of consciousness piece, one where everything is important and none of it is, except this: Go see the play (smile).

Ninth says early on in the story that the terrain is slippery, but we are invited along for the ride if we trust the vehicle – the set, a table with cards on it. The walls move out and the family on the mural disappears behind a wall covered in photos and text, narratives and self-portraits. A bookcase and a large mirror balance the room which has a white cradle hanging near the staircase where Random watches television and the father dies. Some things leave and never come back. I even see how a character reading Frantz Fanon makes sense in this psychological thriller.

Ambrose Akinmusrie’s score is outstanding – especially the lone trumpet solo at the end of a poignant scene where Random tells her ghost story, one all Black people carry inside if unarticulated, ignored or forgotten. This scene is absolutely haunting – and yet the family believes it, even as they try to ignore its implications, even as this adds to the burden Miranda or Random piles onto the edifice about to fall … and fall it does.

I don’t know if I agree with the stereotypical medical diagnosis the playwright assigns to the deceased father. Willie, already an unreliable narrator, contested only by her unreliability as a mother, falls headlong into a place only those walking on sanity’s edges dare go.

The one precious aspect of the tale is this relationship she and her husband share and then this is snatched away. I am almost as shocked by this revelation as I was by the surprising end … not that it was atypical, it was just so typical, convenient and easy for the fictive family. But these are my only complaints. Overall, Chinaka’s “Mirrors” is a thought provoking spin on Black life that will have audiences spinning as the ground keeps pulling away.

Makes one wonder: Did Random really ever exist? And the game bid whist … think about slave auctions where the word is “Bid ‘em in.”

For information, call (415) 626-2787 or visit www.theintersection.org. The theatre is located in the Mission District of San Francisco, 446 Valencia St. “Mirrors” runs Thursday-Sunday, 8 p.m., through March 28. Thursdays are pay what you can.

The collaborative nature of the work – Living Word Project, Campo Santo and Intersection for the Arts – is another reason why this play, this new work, is so marvelous. “Mirrors” is an opportunity for a young artist to enter the canon and treat it so irreverently and do it so well, others will mark the path and follow. Brava, Chinaka, Brava!

Bay View Arts Editor Wanda Sabir can be reached at wsab1@aol.com. Visit her website at www.wandaspicks.com for Wanda’s Picks, her blog, photos and Wanda’s Picks Radio. Her shows are streamed live Wednesdays at 6-7 a.m. and Fridays at 8-10 a.m. and archived on the Afrikan Sistahs’ Media Network.