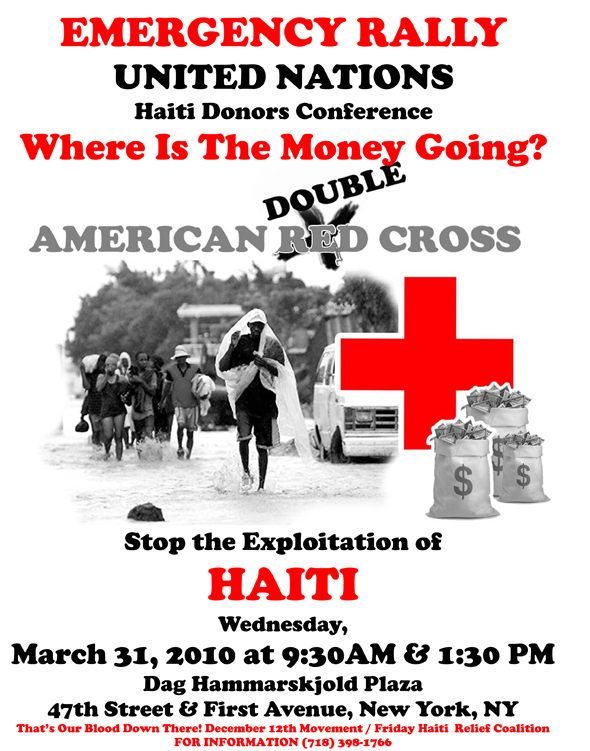 After the earthquake in Haiti, the American Red Cross became the go-to nonprofit for donating to the Haitian relief effort, since they could be trusted to properly handle your money. Or so we thought.

Now it turns out that of the $255 MILLION the Red Cross collected for the relief effort, only $80 MILLION of it actually made its way to Haiti. That leaves $175 MILLION of YOUR donations unaccounted for.

The obvious question is: Where did it go?

Well, according to the website for the Red Cross, quote, “On those rare occasions when donations exceed Red Cross expenses for a specific disaster, contributions are used to prepare for and serve victims of OTHER disasters.

“Your gift enables the Red Cross to provide shelter, food, emotional support and other assistance to victims of all disasters.”

In other words, the Red Cross decided Haiti only needed $80 MILLION. So any money they receive over that amount is being used to pad their general fund. Which isn’t such a bad thing. But it’s not the first time they’ve done this:

1) In 1989, the Red Cross raised $50 MILLION for the victims of the San Francisco earthquake. But it’s estimated that only $10 MILLION of it was turned over to the actual victims.

2) After September 11th, the Red Cross raised $543 MILLION for the family members of people who died in the attacks. But they held back more than HALF of that money, which eventually led to the dismissal of their president.

(The Red Cross is a great organization, and the money they raise will eventually be used to help someone in crisis . . . at least we hope. But they’re not nearly as forthcoming as you would hope or expect, considering it’s YOUR donations that keep them in business.)

(And it’s worth mentioning that the Red Cross got $100 MILLION in bailout funds, and that PRESIDENT OBAMA capped the salaries of Red Cross execs at $500,000 a year. Because they’d been earning almost $1 MILLION a year.)

Visit EsterGoldberg.typepad.com, where this story first appeared. Instead of donating to help Haiti through the Red Cross, donate to the Haiti Emergency Relief Fund, an organization you can trust to help the people most in need. Go online to HaitiAction.net or make your check payable to HERF/EBSC and mail it to EBSC, 2362 Bancroft Way, Berkeley CA 94704. It’s tax deductible.