Editor’s note: Bay View publisher Willie Ratcliff’s construction company, Liberty Builders, has advanced to the second stage of competition for the contract to build the new Bayview Library. The next hurdle is bonding, a barrier that usually locks Blacks out. Ratcliff has a long proven record of hiring from the community. With the people’s support and City Hall’s cooperation, we CAN put our community back to work. Ratcliff, who will be a speaker at the May 8 Jobs Rally, urges readers to join him there to put Blacks front and center in demanding everyone’s right to a living-wage job. 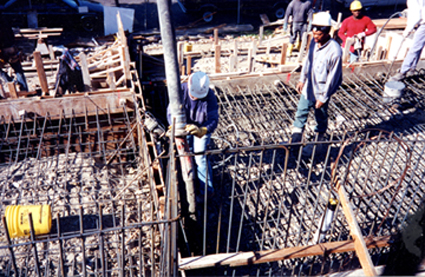 Construction is not rocket science. Slaves who could not read nor write built many of the mansions still standing in the South. Unions were formed in 1867 to protect low skilled white workers from having to compete with highly skilled Black craft workers who were formerly slaves. Today unions require tests to enter the apprenticeship programs. Friends and relatives preview most of these tests in preparation to compete against non-connected applicants (Black).

Today many unions find ways of limiting Blacks from their membership rolls. When work was heavy, unions welcomed craft workers from other jurisdictions. This was good for the unions. It did nothing for the Black unemployed. Some union wages start at $85 dollars per hour. These wages are worth fighting for. That is why we fight so hard for union membership. Just because we criticize unions, we are not anti-union. We would like to see them stronger and fairer to the Black community and we would like to all have union cards.

Some union wages start at $85 dollars per hour. These wages are worth fighting for.

As the executive director of the National Association of Minority Contractors, I proposed and help enact into law a surety bond guarantee program. That program is now called the SBA Surety Bond Program. It provides a 90 percent guarantee against loss for any surety company that writes a bond of up to $5 million for small contractors. Only 12 percent of these bonds are written for Black contractors.

As executive director of the California Office of Small Business, I founded a minority owned bonding company. It was called Builders Mutual Surety Co. It was issued a certificate of authority in December 1977. This company was too small and it was undercapitalized. The paid-in capital and surplus was all borrowed money at 19 percent interest. The company was liquidated in 1997.

The state constitution requires bonds for material and performance. Such bonds are prudent. There is, however, no such requirement for a bid bond. Jurisdictions can accept bonds from companies that are not admitted to the state of California. Government units must become more pro-active. Hiring more bounty hunters to find Black contractors is not the answer. Conversations with successful Black contractors may yield better results. Buying debentures, for example, is much more helpful than loan funds.

Local governments should guarantee bonds for companies whose owners live within the geographical boundaries of its jurisdiction.