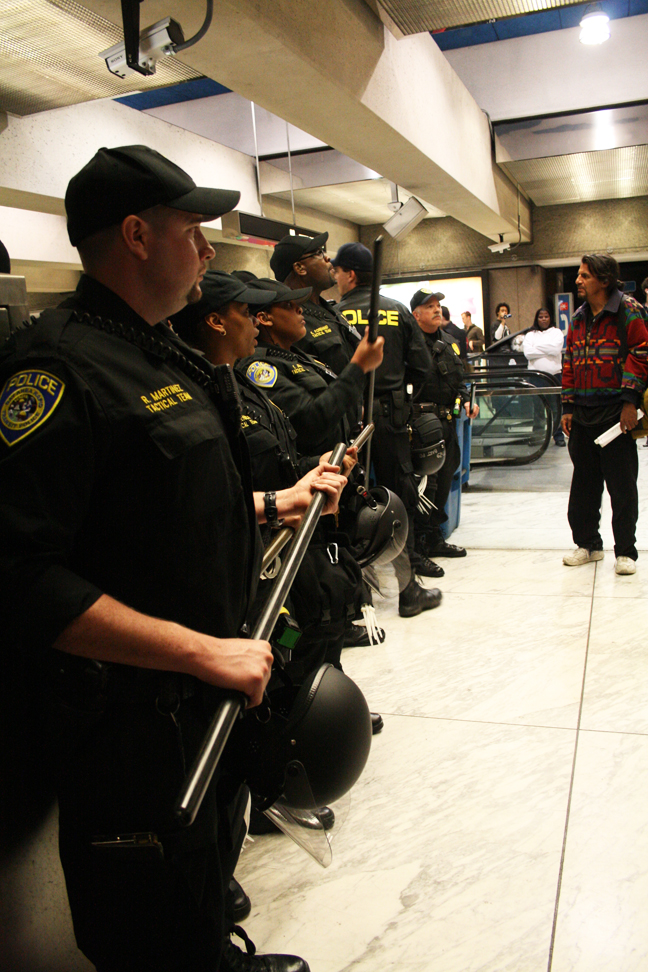 Over 200 protesters disrupted the evening commute at Embarcadero BART station in San Francisco on April 8 demanding justice for Oscar Grant, who was shot and killed on an Oakland train station platform New Year’s Day 2009.

BART police and employees went along for the ride, following protesters – who chanted, played drums and horns – on trains to Montgomery, Powell Street and Civic Center stations.

Over 30 BART police and two dozen other BART employees in bright neon green vests were on the Embarcadero BART platform to prevent service disruptions. There were a few minor delays, and one man was arrested for allegedly blocking a train door.

Protesters shouted, “No Justice! No Peace! Disband the BART Police!” and called for the firing of BART police officer Tony Pirone – currently on paid administrative leave, who Grant’s family said was escalating the situation moments before the shooting.

Officer Johannes Mehserle, who shot and killed Grant while he lay face down with his hands behind his back, has been charged with the murder of Grant. Mehserle’s trial begins in June.

During the demonstration, protesters distributed fliers to passengers on trains while others held up signs that were visible to passengers through the train windows.

As trains were briefly delayed, most commuters were confused about what was taking place. Some commuters were visibly upset while other passengers chanted along with demonstrators, and a few even left the trains to join the protest.

Protesters later swarmed onto trains, followed by police, BART employees and press. The demonstrations continued at Montgomery, Powell Street and Civic Center stations before returning back to Embarcadero station. Tensions then began to rise.

Protesters tried to board a train when police suddenly moved in to stop them. Police pushed and pulled protesters away from the train door and BART police arrested a man for allegedly blocking a door. He was escorted to the police sub-station upstairs. 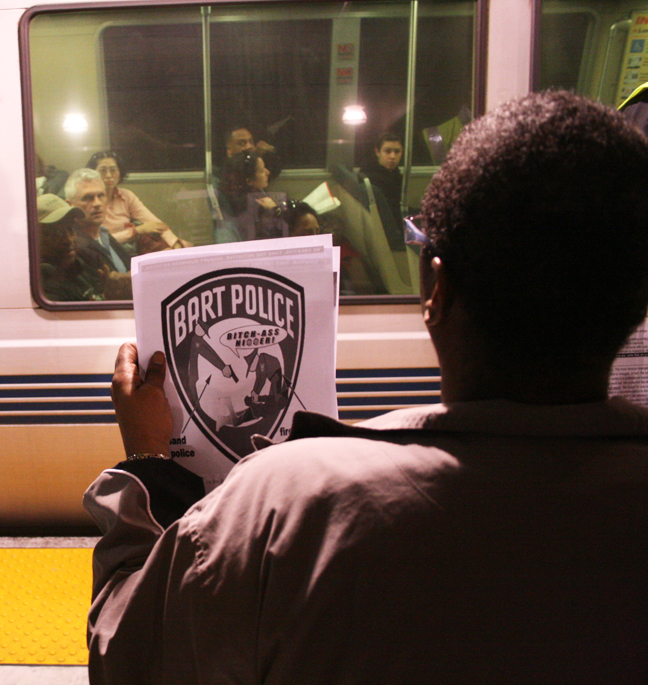 Protester and Oakland for Justice co-organizer Hannibal Shakur said demonstrations will continue until BART is held accountable for its mishandling of the shooting.

“We’re not going to give up until Tony Pirone is fired,” Shakur said. “BART is not qualified to run a police force. They are accountable to no one. BART police must be disbanded.”

The protester who was arrested was cited and released shortly after 11 p.m.

Photojournalist Reginald James is host and producer of the Black Hour, contributing editor to Oakland Local, founder and editor in chief of Harambee Quarterly and staff writer for the Laney Tower. Read his blog at http://dailyregiment.blogspot.com.