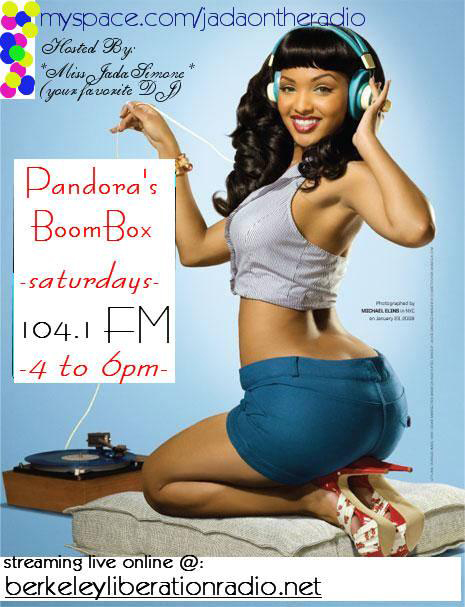 In 2010, it is important for us to realize how vital it is for us to make our own media. We should all know by now that Fox News, KMEL or KPFA isn’t going to tell our stories correctly so we have to expand – and sometimes go outside the legal limits – to make sure that we have an open line of communication with our people through the media. The media can serve ultimately as two things: a mass tool for brainwashing or a tool for educating.

Jada Simone is a dj at Berkeley Liberation Radio with a show called Pandora’s BoomBox. This is a cutting edge show in the Bay Area in the face of the Clear Channel format of sticking to the top 10 popular songs in any given genre. Also take into account that there are not a lot of women in the radio industry who call all the shots on the radio. Check out Jada Simone in her own words.

M.O.I. JR: Can you tell us about your show on Berkeley Liberation Radio? What is it about? What do you play?

Jada: My show is called Pandora’s BoomBox. It’s a musical escape from the stress of the day-to-day grind. The theme is what I like to call a “Mellow Mood Mix,” which may include R&B, Soul, Hip Hop, Reggae, Funk, House, Rock and maybe even Country if the mood strikes me! Pandora’s BoomBox is an oasis: an alternative to the more commercial product you may hear on mainstream radio. In fact, I make a point to play songs and artists you don’t normally hear on corporate radio – in full and uncensored!

M.O.I. JR: How do you feel about the Pirate Radio movement in relation to regular radio?

Jada: I feel that Pirate Radio is a very necessary and valuable tool for informing people on what’s really going on our world. Berkeley Liberation Radio and The SF BayView are just two examples of grassroots community organizations that directly benefit the neighborhoods and cities they serve.

I was born and raised in Oakland. As an artist as well as a true music lover, it confuses and upsets me to hear a lack of airplay for our local artists on mainstream radio. I am also disturbed and annoyed with the content of the programming. I hear a lot of what I call “microwave music” now, and I’m more about revisiting rare, classic, timeless tracks and excavating the origins of new paths in music instead of being stuck within the boundaries of a trend or marketing format.

I don’t really listen to mainstream radio at all since Clear Channel took over; a lot of the stations I liked changed format or just simply disappeared. Berkeley Liberation Radio and all the other pirate radio stations represent a wider range of music and information than mainstream radio has ever offered or allowed. Free speech is alive and well at BLR and it is a privilege and an honor for me to participate!

M.O.I. JR: How has the community responded to your show?

Jada: Community response has been extremely positive! I have been getting a lot of encouraging feedback from friends and listeners. Music defines me in a way that no other medium can, and I tell stories about how I feel in the songs I play. It’s very rewarding to communicate with people this way. Hearing that I’ve made someone’s day better or helped them through a rough moment by listening to my show is such a blessing!

M.O.I. JR: Can you tell us a little bit about your music career? What kinds of music do you make?

Jada: I’ve been singing since I was a little girl, but started pursuing it professionally about 10 years ago. I have been a lead vocalist in various bands, most recently Smart Mouth & The Know It Alls, and shared stages with D Labrie, Nelly, The Jacka and Amel Larrieux. I am also a poet and MC and, with the exception of some cover songs, write all my own lyrics, which is fundamental to my integrity as an artist.

Being a female in a male dominated industry, it’s important to me that my image is properly represented, so I’m learning all aspects of this business to protect myself and my art from “Industry Rule #4080”! I have performed at venues such as the Red Devil Lounge, Oasis, People’s Park, Starry Plough and Mama Calizo’s Voice Factory.

I prefer to classify our music style as “ineffable,” meaning there is no one word to describe it because we incorporate so many styles. For the sake of the question, I coined the phrase “bluesyfunkyreggaesoul,” which incorporates some of the styles we naturally lean toward. Some influences are Michael Jackson, Stevie Wonder, Lauryn Hill, Missy Elliott, Teena Marie, Bob Marley, Prince, Boy George, Steely Dan, Betty Davis, Michael Franks, Billie Holiday and more.

M.O.I. JR: Does being in radio help you learn how to better promote yourself as a musician? How?

Jada: Being in radio helps me promote myself as a musician by using the fact that word-of-mouth is the best form of advertisement to my advantage. Being behind the mic is a very powerful position; the show streams live online worldwide! I don’t like to use my radio show primarily to promote my own music career; however, it is an asset which allows me the opportunity to build relationships and be introduced into social circles an average fan may not be able to access.

M.O.I. JR: When can people catch your show? Where can they hear your music online?

Jada: Pandora’s BoomBox airs every Saturday Afternoon from 4 to 6 p.m. PST on 104.1 FM and streams live on your computer at berkeleyliberationradio.net. Soon I will archive all my shows and make them available to listen to at your leisure on my website. ‘Til then, y’all can catch me at jadaontheradio@myspace.com or visit my DJ profile at www.myspace.com/jadaontheradio. I just want to give thanks and say, “Right on!” to you, JR, for this opportunity, as well as the BayView for enlightening me as one of my main sources of news. Peace to all.