by Godwin Agaba and Ann Garrison

Godwin Agaba, Rwandan correspondent for the African Great Lakes regional outlet 256.com, is now in hiding, though still reporting. On March 9, I spoke to him for KPFA Radio regarding grenade attacks in Rwanda’s capital, Kigali, in the run up to this year’s presidential election, scheduled for Aug. 9:

This week Godwin Agaba confirmed what I had concluded: that Rwanda’s presidential election is effectively closed; all the viable opposition has been excluded.

Many now fear that Bernard Ntaganda, the presidential candidate of the Parti Social-Imberakuri, may soon be in prison for “divisionism,” meaning political opposition to the ruling Rwandan Patriotic Front Party, and “genocide ideology,” a speech crime unique to Rwanda, which I described here in the Bay View, in “Rwanda’s packed prisons and genocide ideology law.” Mr. Ntaganda himself says that he is in imminent danger of arrest and under constant surveillance, even in his own office, though he has managed to remain his party’s leader, despite RPF harassment and infiltration.

And the Democratic Green Party of Rwanda continues to be halted at military bureaucratic roadblocks and checkpoints, enduring meeting after meeting about whether they might have another meeting about the possibility of having yet another meeting to determine whether or not their party might finally be able to meet so as to register and field a presidential candidate.

On April 14, the government shut down the independent African language (Kinyarwanda) tabloid press for the next six months. Since 70 percent of the population speak only Kinyarwanda, not English or French, and only 3 percent have internet access, this means that most will have no information except that in state run newspapers from now until well after the Aug. 9 polls.

European Union election monitors are scheduled to travel to Rwanda but there is nothing left to observe except the effective coronation of incumbent Rwandan President Paul Kagame. The election monitors should stay home in protest rather than validate this charade, unless by some miracle “donor nations,” most of all the U.S. and U.K., choose to heed the Feingold Statement on the Fragility of Democracy in Africa and make civil and political rights, and a real election, a condition of their ongoing support for Rwanda.

Rwandans’ thwarted effort to contest the presidential election is also of great importance to the people of neighboring D.R. Congo, where at least 6 million Congolese people have died in the Rwandan and Ugandan invasions and occupations of Congo since Kagame seized control of Rwanda during the 1994 Rwanda Genocide. The silence of the U.S. press about the loss of African life and U.S. Pentagon responsibility is deafening. 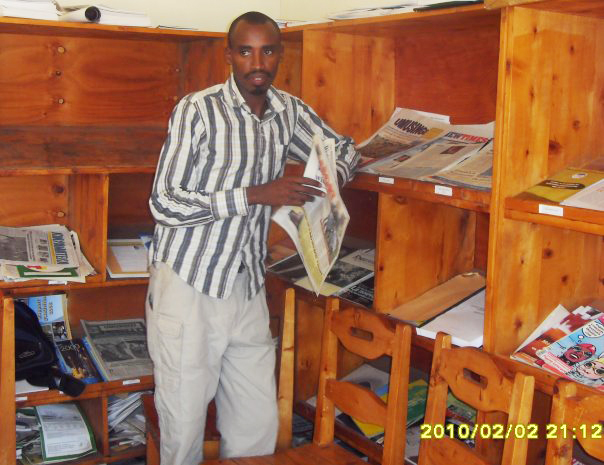 Anyone who has been following events in Rwanda over the last few weeks will agree with me that it is now clear what President Paul Kagame really wants. A safer Rwanda! A Rwanda where there is no political upheaval, no opposition politics, no sentimental politicians, no old friends, no dissent and, above all, no critical newspapers to report the prevailing “peace and tranquility.”

Presidential elections will go ahead as planned in August and when the dust has settled in September, those still living will witness a sympathetic, loving and caring president, a head of state ready to forgive and forget as he embarks on another seven year term as head of state. How cool is that!

Gen. Marcel Gatsinzi will be hauled to court to answer the genocide charges that continue to linger around his back before being thrown into jail. Lt. Gen. Charles Kayonga will be sent to Rwanda’s Pentagon and given a few challenging but less empowering tasks and Gen. Kabarebe will most likely retire. Rwandans will have a newly elected leader and The New Times will struggle not to lead with the PK [Paul Kagame] rigs to set a new world record!

The High Council of the Press will come up with yet another silly document which Patrice Mulama, posing in front of cameras, will read confirming that Umuseso and Umuvugizi newspapers have been reinstated. It will be business as usual and the international community will continue to pour money into Rwanda with the aim of ending poverty and fostering economic development.

Right path? Don’t ask me for I really don’t know. What is clear though is that Paul Kagame, having commanded the forces that he says ended the genocide and helped restore order in chaotic Rwanda, has embarked on a self-destructing campaign. He will stop at nothing to make himself clear and louder to all that Rwanda belongs to him and only he knows what is good for the country. He does not even appear bothered by the idea of ruling the country as if it is some family ranch, because according to what he knows, he is popular, charismatic and knows his country’s history better than anyone else. And who are we to challenge him? What exactly do we know? To him we are rejects who should either shut up or put up with whatever nonsense is being paraded as long as we rise up at the end of the day to toss to the monsieur – only this time, in English!

Make no mistake: The president is in charge. When coup rumors went around a month ago, he was very stern as he was precise in his assurances to his audience that Rwanda will never have a coup. “A coup in Rwanda, never … not here,” he said. If that was a statement that lacked the marrow, he made certain a few days ago with impromptu changes in the army. Gen. Gatsinzi, the hitherto docile defense minister, was dropped for a close friend (former friend some will argue), Gen. James Kabarebe. 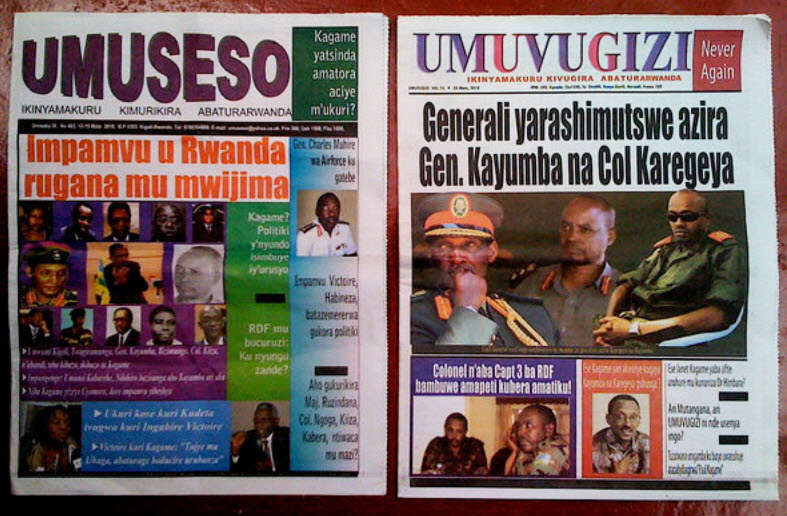 Lt. Gen. Charles Kayonga, who many basing their conviction on local media reports thought was under house arrest, got in to replace Gen. Kabarebe. Some will argue this was a tactical move by the man in charge. Technically demote the popular Gen. Kabarebe by making him defense minister and bring Kayonga closer in a more demanding position where he can be checked on and made too busy to even think of a coup.

I’m not very knowledgeable about the finer intricacies of army changes but speculation has never been my specialty either. It is very plausible though that it is much easier to look after and maintain an eye on a chief of defense forces than it is on someone who is head of land forces. For the sake of the issue at hand, I will take what the official version is and leave the rest to you, my readers. Fortunately, there is no official version of the changes, just a routine reshuffle.

Political temperatures in Kigali continue to rise. Kagame continues to impress. He seems very popular with the wanainchi [the people, citizens or masses] or at least it looks that way whenever he pays them visits. Opposition politics in Rwanda remains a far cry. Those who have dared to challenge the establishment now find themselves in limbo fearing not only for their lives but, at the moment, for their political parties as well.

Victoire Ingabire has been summoned to the Criminal Investigations Department more times than she has been allowed to go to church unattended. She is religious, but the government would rather she was not. Religious people get to meet others when they go to church. And when you don’t want someone to mix with others for fear that they will talk about their political agenda, you so wish they were pagans.

Those who have dared to challenge the establishment now find themselves in limbo fearing not only for their lives but, at the moment, for their political parties as well.

Frank Habineza, another of the political hopefuls, a former Rwandese Patriotic Front member who broke ranks to form the Democratic Green Party of Rwanda – a party whose registration seems to bother Kagame more than the poverty in the country – is not having it smooth either. He has on several occasions been in the news complaining about scary emails and intimidating phone calls from state agents who continue to threaten him unless he gets out of politics.

Bernard Ntaganda, who until a week ago was party chairman for Rwanda’s only vocal political party, PS-Imberakuri, was successfully ousted by a party wrangle within his own party that many believe was orchestrated by the ruling Rwanda Patriotic Front.

With these under control, in dissaray, under investigation or currently being accused of one or several offences, Kagame will definitely emerge as the one and only presidential candidate come August. He will achieve what he has set out to achieve – ruling Rwanda – forever. And as long as the elections are held at the hindsight of local and international observers, we will have no legal reason to believe that his victory was manipulated.

The media, which in such an environment would have provided credible evidence as to the real situation on the ground, has been manipulated. Those like Umuseso, who have not been so keen at accepting government tokens, have now been suspended. The six months suspension effectively rules out Umuseso in the media life of Rwandans until, well, after the elections. If that is not calculated, then I stand to be corrected as to whether Kagame is not preparing himself to be the father figure and self-appointed Lord of Rwanda he wishes and claims to be.

Godwin Agaba was a Rwandan correspondent for Great Lakes regional outlet 256.com; he is now in hiding but still publishing without his byline.

On April 7, 2010, in his address at the Kigali Memorial Center, Rwandan President Paul Kagame blamed “you,” a conveniently flexible and expandable category, and all those calling for political space and press freedom for the 1994 Rwanda Genocide, in which a million Rwandans died. This is the English language section of his English and Kinyarwanda address particularly concerned with press freedom. For the entire English language section of the address, click here. One week after this address, on April 14, 2010, Kagame’s “High Media Council” shut down the independent African language newspapers that most Rwandans depend on.