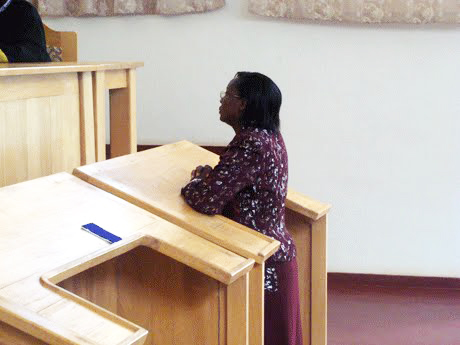 “Ingabire was arrested on trumped-up, political thought crimes, including association with a terrorist group, propagating genocide ideology, genocide denial, revisionism and divisionism, all arising from the “crime” of publicly objecting to the Kagame military dictatorship and Kagame’s version of Rwandan civil war history.”

Gen. Paul Kagame, her would-be opponent, is engineering a re-run of the 2003 sham “elections” that brought Kagame to power with 95 percent of the vote.

According to Erlinder: “The arrest of Madame Ingabire in the run-up to the 2010 election is a carbon copy of Kagame’s tactics in 2003 when all serious political challengers were jailed or driven from the country, including former Kagame loyalists, like the former president and prime minister, Pasteur Bizimungu and Faustin Twagiramungu.

Hundreds, if not thousands, of former Kagame supporters have gone into exile in the recent past, including the former speaker of the Rwandan Parliament, the Rwandan ambassador to the Netherlands, who granted Madame Ingabire’s visa to return to Rwanda in January, numerous senior military officers and political figures, and Paul Rusesabagina, the real hero portrayed in the movie “Hotel Rwanda.”

In late February 2010 leaked notes, in the original in the Kinyarwandan language, purported to report Kagame’s meeting with Rwandan ambassadors, who had not yet gone into exile. In the meeting, Kagame allegedly targeted some seven non-Rwandan lawyers, journalists and academics for public discrediting or assassination. Kagame had Erlinder’s name on his “hit list” even before Erlinder took on Ingabire’s defense, presumably for his role in genocide-planning acquittals in the International Criminal Tribunal for Rwanda (ICTR) Military-1 trial.

Erlinder said: “According to U.N. Security Council-commissioned reports of 2001, 2002, 2003 and 2008, the Kagame regime is responsible for more than 6 million deaths in the Congo, hundreds of thousands in Rwanda, which is confirmed in Spanish and French indictments, issued in 2006 and 2008. (See indictments of French Judge Bruguiere, November 2006, and Spanish Judge Merelles Abreu, February 2008.)

“According to ICTR prosecutor’s files and revealed by the books of ICTR prosecutors Del Ponte and Hartmann, Kagame also touched off the Rwandan ‘genocide’ by assassinating the presidents of Rwanda and Burundi as part of a final military assault to seize power in April 1994.”

“With this history, I have to take Kagame’s threats seriously and have to insist that the Obama administration, President Dennis Byron of the U.N. Rwanda Tribunal and Kagame himself provide public safe-passage guarantees for Madame Ingabire and all defense team members while we are defending democratic principles and human rights in Rwanda.”

Evidence of Kagame/RPF crimes and cover-up

Recently, U.S. political scientists Dr. Alan Stam of the University of Michigan and Dr. Christian Davenport of Notre Dame have analyzed data from all reported crimes in Rwanda during 1994 and have concluded that more Hutu were killed or brutalized than Tutsi before and after the Rwandan Patriotic Front (RPF) seized power in July 1994. This analysis, together with the “conspiracy and planning” acquittals of former top military officers in the ICTR Military-1 case has called the entire theory of a “planned genocide” into question.

According to Erlinder: “It is just a matter of time before the world knows what those of us working at the ICTR already know and which has recently been confirmed by the 2007-2009 memoirs of former ICTR Chief Prosecutor Carla del Ponte and her aide, Florence Hartmann. Del Ponte reveals that, as early as January 1997, her predecessor, Louise Arbour, had the evidence to prosecute Paul Kagame for igniting the Rwandan ‘genocide’ by assassinating the presidents of Rwanda and Burundi on April 6, 1994. Also, U.N. and U.S. government documents in the Military-1 trial evidence show the United States has engaged in a massive cover-up of Kagame’s crimes to protect its own strategic interests in Central Africa, a cover-up which is also confirmed in Del Ponte’s and Hartmann’s memoirs.”

Now that their client has been temporarily released, the Ingabire defense team insists that President Gen. Kagame and Rwanda’s justice minister and chief prosecutor, as well as others associated with the Kagame regime, military and police, and their major funders in the U.S. and U.K. all demonstrate respect for democratic principles and the rule of law by

(a) the immediate return of all computers, political or personal documents and other items seized from Madame Ingabire’s home;

(b) removal of all restrictions on Madame Ingabire’s ability to campaign for the votes of the Rwandan people, including the return of her passport and elimination of police reporting requirements;

(d) full access to the press and the media by opposition parties and candidates and an end to intimidation tactics against opposition political activities, as well as

The International Humanitarian Law Institute is directed by Peter Erlinder, professor of constitutional criminal law and international humanitarian law at William Mitchell College of Law in St. Paul, Minn., U.S. Supreme Court Chief Justice Warren Burger’s Minnesota alma mater. Erlinder is also lead defense counsel in the Military-1 trial at the U.N. Tribunal for Rwanda, the case in which four former top military leaders were acquitted of conspiring or planning to commit genocide or any other crimes, and the highest ranking defendant was acquitted of all charges, in December 2008. Erlinder is also president of ICTR-ADAD (Association des Avocats de la Defense) and past-president of the National Lawyers Guild in New York City. Professor Erlinder can be reached at peter.erlinder@wmitchell.edu.