Berkeley – On Friday, April 23, ICF International’s vice president, Carole Norris from the multi-national’s corporate office in San Francisco, could be found at the North Berkeley Senior Center pushing for the termination of Berkeley’s public housing program from her lofty position as the chair of the Berkeley Housing Authority (BHA). 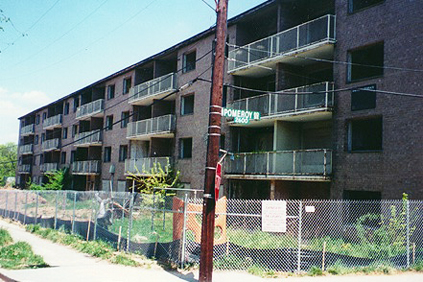 BHA Chair Norris of ICF International initiated the actions taking place to terminate Berkeley’s public housing program, set in motion the process to privatize Berkeley’s 75 public housing units and is seeking a way to leverage financing for the privatization scheme by grabbing much needed Section 8 voucher subsidies from the poor. The BHA is expecting approval from HUD to dispose of its public housing by May or June.

In recent months, Berkeley’s public housing residents have been appearing before the City Council to protest the scheme to privatize their long-time homes and state that a conflict of interest exists with Norris as a BHA commissioner. They also demanded the resignations of Norris and BHA Executive Director Tia Ingram.

Indeed, a conflict of interest exists because ICF International’s Carole Norris is beholden to ICFi and its shareholders, despite her position as chair of the BHA Commission.

Highly paid consultants Erik Novak and Scott Jepsen of EJP/Praxis Consulting Groups were also at the April 23 BHA commissioners meeting, including Jon Gresley, executive director of one of 33 controversial experimental MTW Public Housing Authorities (MTW-PHAs) that do not have to abide by the normal federal laws protecting federally subsidized low-income renters or clients in the nation’s over 3,000 public housing authorities.

The trio of consultants, along with ICFi consultant Carole Norris, were all promoting their sales pitch to convince the BHA’s full board of commissioners to follow through with the scheme to terminate Berkeley’s public housing program and privatize the low-income residents’ 75 public housing units.

The event included the same Jon Gresley that was involved in the controversy over the notorious one-strike policy when his agency, the Oakland Housing Authority, moved to evict four innocent elderly public housing residents in Oakland for alleged crimes they did not commit, resulting in a huge struggle that was fought all the way to the U.S. Supreme Court by Anne Omura of the Eviction Defense Center and a team of 26 local attorneys defending the rights of Oakland’s public housing residents in 2002.

The April 23 vote passing Agenda Item B on the Action Calendar was part of a series of votes being orchestrated by the corporate consultants that have infiltrated the BHA in their crusade to dismantle BHA’s public housing program.

Berkeley public housing tenant Keith Carlisle had the support of other low-income public housing residents, who allowed him to speak on their behalf at the April 23 BHA meeting. However, he was cut short by BHA commissioners while doing his best to speak out against the scheme to terminate Berkeley’s public housing program in the struggle against the high priced consultants from ICF International, EJP Consulting Group, Praxis Consulting, and Overland, Pacific and Cutler consultants who have infiltrated the BHA.

Janny Castillo, community builder with Building Opportunities for Self-Sufficiency (BOSS), was also at the meeting to offer support to the mostly African-American low-income households trying to save Berkeley’s public housing from being privatized.

During an April 29 phone interview with public housing resident Rhonda Rogers, she said: “My hair is standing on my head. They are trying to find any way possible to evict us. This thing has been wrecking our lives, and we have been under a lot of pressure.

“They have been combing through my records and have been trying to find a reason to kick me out. There was an inspection last week, and there was another one this week. It’s stressing me out. It’s sad. I’ve been a public housing resident for 12 years in Berkeley, and they are treating us horribly.

“I’m under pressure to accept a Section 8 voucher, which I do not want because I will have to pay more for rent than I do currently, and I’m only getting unemployment at the moment. We’re also being harassed and being pressured to sign new leases. They told me that they lost my lease and tried to pressure me into signing a new one lately.

“I did not believe that they lost my lease, and I refused to sign another. The new lease looked strange, not like the old ones. They’re trying to trick us out of our housing. It’s terrible what they’re doing to us.”

“I feel so sad that I am being displaced from my housing, and everyone else feels the same way. I’ve lived here for over 18 years, and am afraid to saying anything that might anger the Housing Authority.”

Nationwide, public housing is home to around 3 million seniors, people with disabilities and low-income families. It provides essential services while contributing significantly to local economies by the direct spending of $8.1 billion a year by public housing authorities (PHAs) on capital improvements, maintenance and operation of their public housing projects, while generating an additional $8.2 billion in indirect economic activity. (See the 2007 PHA economic study, a joint release from CLPHA, HAI Group, PHADA.)

However, contradicting those figures in an October 2009 BHA release by ICFi, BHA Chair Carole Norris and BHA Executive Director Tia Ingram state that BHA needs over $4.5 million in hard cost repairs for its public housing units and that Berkeley’s public housing program is operating at a loss of $150,000 per year. That’s about a million dollar difference in repair cost estimates.

Additionally, based on the information in the same July 2009 report, BHA consultants say that 86.5 percent of public housing residents identify themselves as Black or African-American, 11.2 percent as white, and 2.2 percent as Asian.