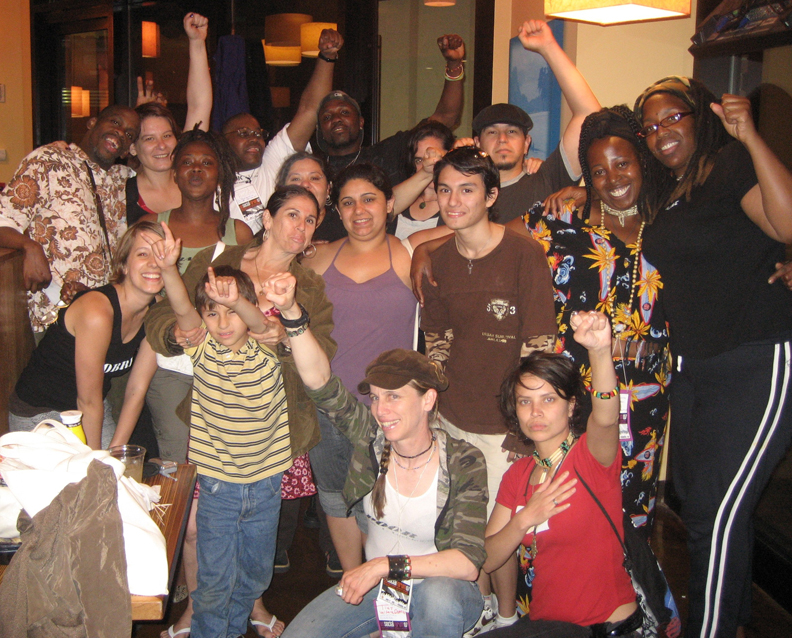 When they come in their designer suits, driving BMWs and carrying $200 briefcases, we see them. We protest, we rally, we organize and then, most of the time, we still get evicted, displaced and removed from our neighborhoods, our land, our communities. When the gentrifiers come into our streets and neighborhoods and speculate on our rented, leased and owned real estate, we can see our demise coming and we just might have a chance to stop it or slow it down. But when the e-colonizers come into our digital communities or e-estate, we can’t see them. We get spoken for, written about, maybe linked to and referenced, but e-gentrifying is much more subtle, insidious, less clear.

“I’m going to call this out for what it is: gentrification journalism,” declared JR Valrey at the recent Journalism Innovations II conference at the University of San Francisco. He called out the collective truths of thousands of displaced, evicted and silenced voices of poor folks, youth of color, elders and communities of color.

On the last day of the conference, a panel moderated by Tim Redmond of the SF Bay Guardian included JR Valrey of the Bay View newspaper and Block Report Radio, Eva Martinez of El Tecolote newspaper, Michele Fitzhugh-Craig of ZM productions, Tracy Rosenburg of Media Alliance and myself, Tiny aka Lisa Gray-Garcia of POOR Magazine and Prensa Pobre (Poor News Network). The panel was billed as New Models of Community Journalism: Opportunities or Hindrances?

As I read the title of our panel over and over again, the ideas of the deeply rooted, community-centered, community-based journalism that POOR Magazine, El Tecolote and the Bay View have been doing in the Bay Area for years was being re-invented, re-named and colonized by new websites and media organizations supported by large educational and philanthropic institutions. And in the tradition of other acts of colonization, these groups – like Mission Local, Oakland Local and Oakland Seen – re-named the landscape, our landscapes of community media production as “hyper-local” journalism. What was hyper-local journalism?

“We have been creating media rooted in our community, the Mission district, for 40 years, always struggling, always speaking the truth of our communities, always here,” explained Eva Martinez, editor of El Tecolote. Eva revealed that Mission Local, one of the “hyper-local” sites, launched a pseudo-collaboration with El Tecolote and through that “collaboration” Eva discovered that Mission Local, which was staffed by the students and graduates of the UC Berkeley Journalism School had a $250,000 budget, while El Tecolote continues to struggle to raise enough ad revenue to continue putting out their beautiful bilingual publication twice a month.

How do poor mothers, low income youth of color, migrant workers struggling to keep two or three jobs just to survive, disabled elders and people currently struggling to keep a roof over their heads produce media? How do poor people who are actively lied about and stereotyped de-silence their collective voices? How do people who have been told they “can’t write well” become journalists, people who have been told they can’t speak clearly, become radio and TV broadcasters? People who have been repeatedly silenced, barely quoted, only referenced, racialized, criminalized, and so often talked at rather than talked with become truly heard, become authors and producers of their own stories told by them?

These issues remain the most important questions for Bay Area community-centered media outlets such as POOR Magazine, the Bay View and the Block Report. It is why POOR Magazine, the poor and indigenous people-led organization started by me and my African-Boricua ghetto scholar disabled mama from our own experience of landlessness, racism and disability, practices eldership and ancestor worship in our indigenous news-making circle, which powers all members of the community from both sides of the Bay as media producers.

It is why we launched countless poor people education projects like PeopleSkool (Escuela de la Gente), which teaches with stipends, child care and meals how to become journalists and media producers. It is why we create art and media projects which value the scholarship of poverty that poor people already have, like Voces de Inmmigrantes en Resistencia, Revolutionary Worker Scholar, Poor News Network, Poetas Pobres Project, Indigenous Peoples Media Project, the welfareQUEENs and our most recent people-led, not institution-led, research project, We-Search Camp, and B-MAD! the Black Media Action Delegation.

It is why El Tecolote and the Bay View, reporting on the stories of corporate greed, gentrification, racism, poverty and more, struggle year after year to publish their beautiful papers rooted deeply in our communities – so our gente, the workers, the elders, the small businesses can stay connected, informed on issues happening to our communities locally and globally. It is why the Block Report consistently speaks for and with incarcerated, profiled and silenced youth and adults in Black communities from Hayward to Haiti. It is why we are all here. It is why we have always been here.

With the truth of resistance spoken on that Sunday, there was a fascinating tear in the fabric of gentrification journalism/colonization. A moment when the colonizers had to answer in real time to their colonization. Had to own the fact that they continue to operate in every area with the same MO – never asking our elders’ permission, never considering different models of collaboration that start with support and don’t end up re-inventing the wheel but rather support the building of a stronger wheel.

Tracy Rosenburg of Media Alliance also reminded the panel to be mindful of the impending fight to keep net neutrality, i.e. keep the digital landscape accessible to all of us, not just some of us. Which, interestingly enough, was and is a struggle that POOR Magazine, the Block Report and the Bay View have worked on. Digital apartheid, I call it, and the corporate thieves like Comcast continue to attempt to rip off our airwaves and on-line highways.

This struggle is ironic, as it is very hard for poor folks struggling to feed our babies and ourselves to get interested and stay involved in a fight for net neutrality, which is so far away from our daily struggle and almost seems elitist. But us poverty scholars at POOR Magazine and the Bay View, we did it, because we care about all people’s access, not just ours.

So I have a new proposal, a challenge to all of the conscious folks who journal and edit Mission Local, Oakland Local and Oakland Seen or nonprofit industrial complex hyper-local journalism like the Bay Citizen and other sites like these springing up across the nation, such as the Honolulu Civil Beat in Hawaii, to consider sharing at least half of your grant money, ad revenue, new computers, not to mention your technology staff with the never funded, always struggling Bay View, El Tecolote and POOR. To subsidize the tuition of poor mamaz, migrant workers and low-income youth to attend PeopleSkool. To enroll yourselves in PeopleSkool. To set up syndicated columns in your publications that feature our work, not dominated by your editorial demands and what I call linguistic domination.

This could be revolutionary for all parties, the colonizers and the e-colonized. This could be a resistance model for our brick and mortar communities facing gentrification across the U.S. An example of true equity sharing between all peoples, all media producers.

Tiny aka Lisa Gray-Garcia, revolutionary journalist, poverty scholar, welfareQUEEN, Daughter of Dee and single mama of Tiburcio, can be reached at deeandtiny@poormagazine.org. She is a teacher, lecturer, poet and spoken word artist who is the co-founder and co-madre of POOR Magazine/Poor News Network and the author of “Criminal of Poverty: Growing Up Homeless in America.”