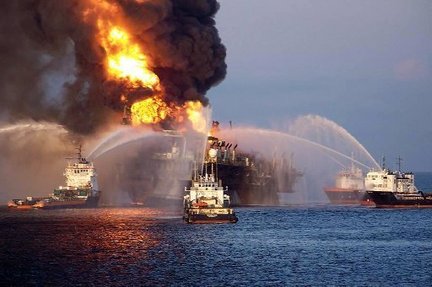 The Coast Guard estimates 5,000 barrels of crude oil a day, 210,000 gallons a day, are pouring out of a damaged British Petroleum well in the Gulf of Mexico since the April 20 Deepwater Horizon rig explosion. Eleven people died in the explosion. The oil rig burned and sank. The exploratory well, which is 50 miles away from the coast, continues to powerfully disgorge oil from the bottom of the 5,000-foot-deep surface of the Gulf.

Oil has now reached the Louisiana coast. The Associated Press reports there is an oil slick 130 miles long and 70 miles wide in the Gulf of Mexico. Birds covered in thick black oil have already been recovered. Efforts to stop the oil have not proven effective. The AP reports the oil is expected to reach Mississippi, Alabama and Florida in days.

Late on the afternoon of Friday, April 30, the Mobile Press Register reported a confidential government report prepared by the National Oceanic and Atmospheric Administration’s Emergency Ops concluding that if the pipe on the Gulf floor “deteriorates further, the flow could become unchecked, resulting in a release volume an order of magnitude higher than previously thought.” An uncontrolled release of oil “could become an unchecked gusher shooting millions of gallons of oil per day into the Gulf.” 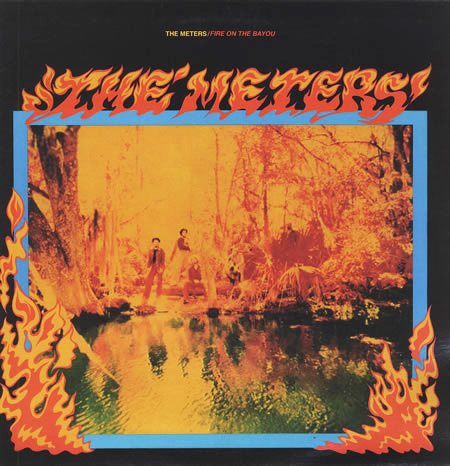 Plans to set parts of the Gulf on fire have been pushed back by bad weather. The unprecedented idea was to burn up the oil spill before it reached land. “This is a great tool,” promised a BP representative.

In response, one long-time Louisiana resident said, “You know you’re in very serious trouble when the solution is for BP and the feds to set the Gulf on fire.”

Worst hit in Louisiana are the coastal areas of Plaquemines and St. Bernard Parishes – just now limping back from the devastation of Hurricane Katrina.

On Friday afternoon, federal and state officials held a joint press conference in Louisiana. Curiously, they held their conference with BP representatives. Officials characterized the situation as dangerous and unprecedented.

Government representatives said they were pushing BP to increase its efforts to stop the oil because current efforts have not been effective. Secretary of Homeland Security Janet Napolitano flatly acknowledged that the U.S. is working closely with BP.

BP has caused a lot of trouble lately. The Pulitzer Prize winning news site Pro Publica reported BP “has found itself at the center of several of the nation’s worst oil- and gas-related disasters in recent years.” BP recently pled guilty to federal felony charges related to a massive explosion in Texas where investigators found ignored safety rules and a disabled warning system. BP is also accused of responsibility for several recent spills in Alaska. 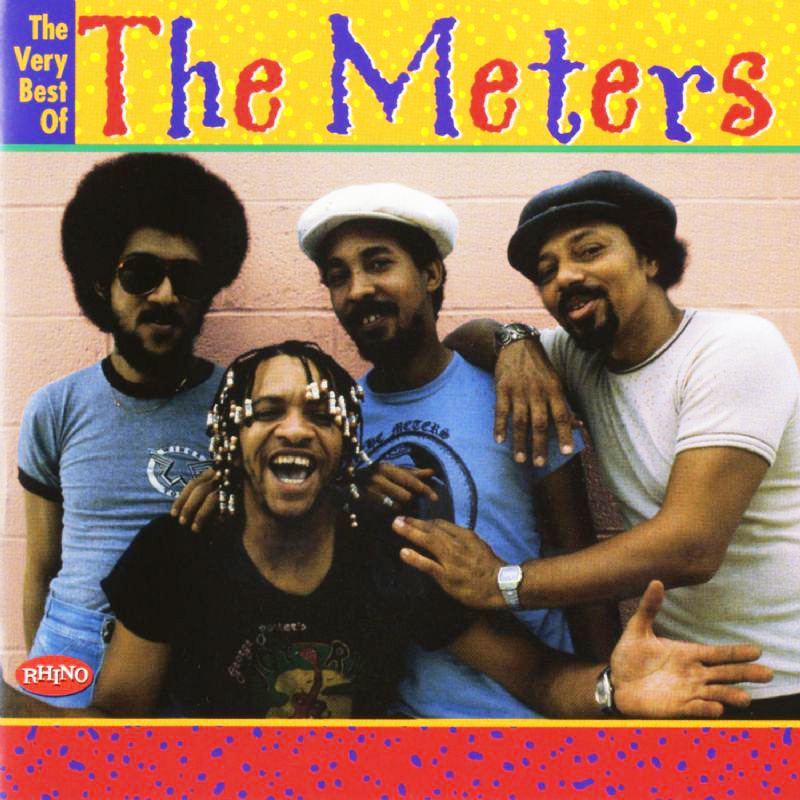 Why then would federal and state officials hold a joint press conference with BP, given the multinational corporation’s role in the unfolding disaster? Perhaps the reason was hinted at by a comment from the secretary of the interior in which he cautioned that the U.S. depends heavily on oil and gas production in the Gulf of Mexico. Even though the White House protested that the oil spill is not President Obama’s Katrina, a public partnership between the perpetrator BP and the government certainly has the potential to become a “Katrina moment.”

Louisiana is trying to deploy 6,000 members of the National Guard. Air Force planes have been called in to spray chemicals on the oil. National Guard soldiers in Louisiana are currently “engaged in the planning of the effort to evacuate and provide security and clean up for the coastal communities expected to be impacted by the spill.” They are also planning for the protection of medical facilities, fuel distribution, interstate highways, and power facilities.

Louisiana has already started setting up its shelter program for people with special needs who may have to be evacuated because of concerns about air quality.

Official states of emergency have already been declared along the coasts in Alabama, Florida, Louisiana and Mississippi.

Along the Louisiana coast, people fear the loss of the fishing industry. In New Orleans people worry about air quality. 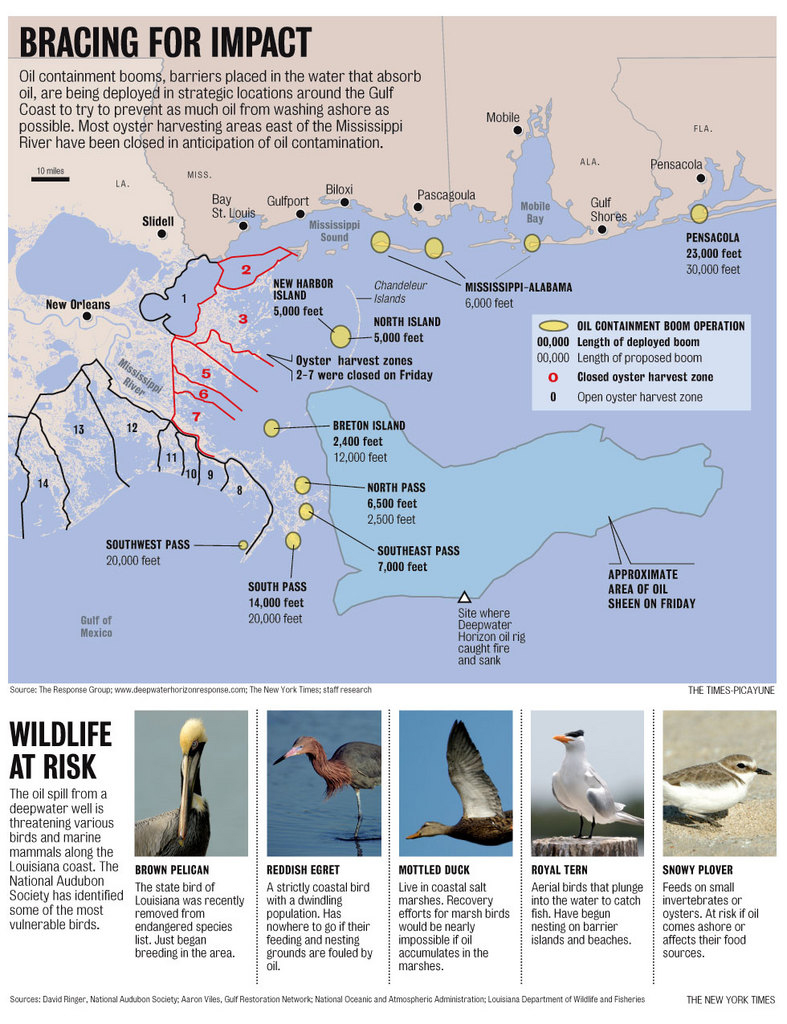 Thousands of pelicans, herons, egrets, ibis, frigate birds and rarities like grebes and albatrosses are at risk from the river of oil. Dolphins are birthing at this time so their offspring are at risk. Shrimp and oyster fishing grounds are being closed.

Air quality for humans is another serious issue. The New Orleans area, home to hundreds of thousands, has already been blanketed by a chemical odor.

The head of the Louisiana State Health Department, Jimmy Guidry, said the smell is an irritant, affecting people with lung conditions and asthma. He said it is normal for the smell to arrive before air quality checks could detect anything harmful. Officials with the Louisiana Health and Hospitals and Environmental Quality said changes in air quality can cause nausea, vomiting or headaches for people who are sensitive. Air sampling was started by the Environmental Protection Agency Thursday and water sampling started Friday. No reports have been made public so far.

Gov. Jindal has asked that the feds declare a commercial fisheries failure for Louisiana. The state supplies about one-third of the seafood harvested in the lower 48 states – about $2.85 billion worth a year. Louisiana has put price gouging laws into effect forbidding the raising of prices on gasoline, petroleum products, hotels, motels and retailers.

Jindal told the press Thursday that he has asked several times for a detailed plan of how the Coast Guard plans to handle the situation, but he has “not seen a quantifiable plan.”

In an ominous note, lawmakers, according to USA Today, say they have been told that not only is light crude headed towards the coast, but so too is heavy asphaltic oil. 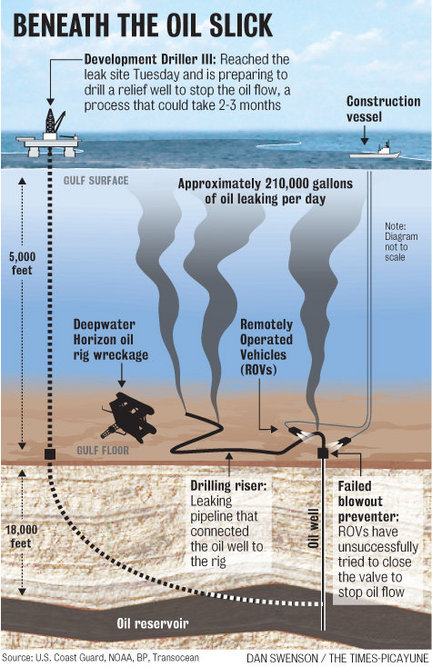 “This isn’t a spill. This isn’t a storage tank or a ship with a finite amount of oil that has boundaries. This is much, much worse,” said Kerry St. Pe, the former head of the Louisiana oil spill response team. The Gulf spill is really a river of oil flowing out of the bottom of the Gulf, according to the New Orleans Times-Picayune.

In 1975, the New Orleans group, The Meters, released their album, “Fire on the Bayou.” The album cover featured an apocalyptic orange and yellow painting of a bayou ablaze. In 2010 the idea of a fire on the bayou may well be coming true.

Bill Quigley is legal director for the Center for Constitutional Rights and a law professor at Loyola University New Orleans. His email is quigley77@gmail.com.

How you can help – as a volunteer or for pay

Volunteer opportunities: As the oil slick from the collapse of the BP Deepwater Horizon Rig reaches the Louisiana coastline, the fragile wetlands that serve as the natural flood defenses to the Gulf Coast and home to numerous wildlife refuges are in significant danger.

Common Ground Relief volunteers are ready to assist where possible to help in the cleanup of this disaster. If you are in the Gulf Coast region and would like to offer your help, the Coalition to Restore Coastal Louisiana is working with numerous organizations to aid in recovery efforts. To register with them, click here.

So far in 2010, Common Ground Relief’s Wetlands Restoration Program has, in partnership with Bayou Rebirth, planted over 2,000 bottomland hardwood trees and begun propagation of 40,000 stems of marsh grass this year in efforts to restore the already depleted wetlands, and it is vitally important that this work adapt and continue in light of this most recent disaster.

Cleanup jobs: Advanced Industrial Services is looking to hire 500 people to help with the oil spill cleanup. Click here for the application.

Fill out the application and take it to JOB1 Business and Career Solutions, 2330 Canal St., New Orleans. They will be accepting applications Monday-Friday 9 a.m. to 3 p.m. 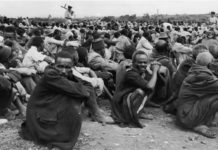