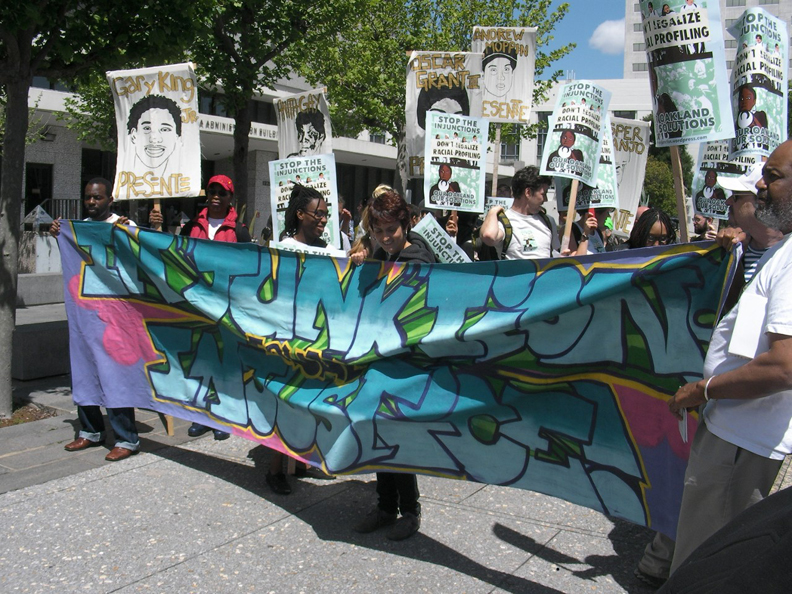 Oakland stood up for its youth on Thursday, April 22, gathering at the courthouse on Oak Street to protest the gang injunction filed by Oakland City Attorney John Russo. The proposed injunction focuses on a 100-block area in North Oakland, criminalizing normally legal activities.

Within this so-called “Safety Zone,” such activities as “driving, standing, sitting, walking, gathering or appearing” would be punishable by fines up to $1,000 and up to six months in jail.

City Attorney Russo’s website states: “An injunction is similar to a restraining order. It would protect the neighborhood by restricting the behavior of a small group of hard core gang members within a specific area called a ‘Safety Zone.’” Russo himself claims that these so-called “gang members” “are part of a malevolent force that has crippled our city for decades and continues to hold Oakland back today.”

However, the community members gathered at the downtown courthouse on Thursday did not support the notion that specific individuals are to blame for violence in Oakland or that an injunction is the proper method to deal with violence in their community. Opponents believe that the injunction not only concentrates unnecessary power in the hands of police officials; it also essentially mandates racial profiling of Oakland youth.

Concerns that the injunction violates the rights of Oakland’s youth – including that of due process – brought many to the rally. Oakland residents have expressed frustration that the root causes of violence, such as a lack of jobs and educational programs, are not addressed by the injunction. 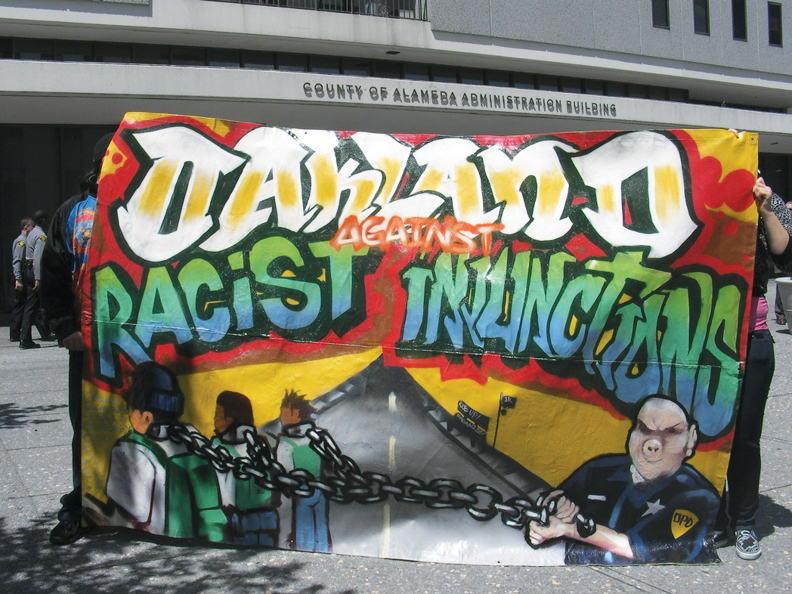 Dorsey Nunn, program director of Legal Services for Prisoners with Children, described the injunction as an attempt to blame “a few bad apples” to justify the abuse of their rights. He explained, “A ‘few bad apples’ ultimately mean they chop down the whole damn tree.”

Minister Keith Muhammad of the Nation of Islam also addressed the crowd. He stated that, upon interviewing some of the 19 individuals specifically targeted by the injunction – who presumably belong to the same gang – he discovered that some of them did not even know one another. He demanded that city officials “stop scapegoating the poor,” claiming that money and resources should be allocated to education and community-building efforts. He condemned the almost half a million dollars of Oakland’s budget that would be spent on the injunction.

The American Civil Liberties Union (ACLU) of Northern California has also come out against the gang injunction and has filed an amicus brief with the court considering the proposal. The ACLU is concerned that the injunction would give police officers too much discretion, giving them the power to designate someone a gang member and then subject that person to severe restrictions without ever having to present evidence to a judge.

Due to objections raised at the April 22 hearing by the ACLU about procedural errors, the hearing has been postponed until May 27. Organizers of the rally welcome the postponement as an opportunity to continue building momentum to stop the injunction.

“We will use this time to continue building together to stop the gang injunctions once and for all,” says Manuel La Fontaine of All of Us or None and Plan for a Safer Oakland, a member organization of the coalition effort that organized last week’s rally. “We will not stand idle while police are given the green light to continue targeting young people of color.” 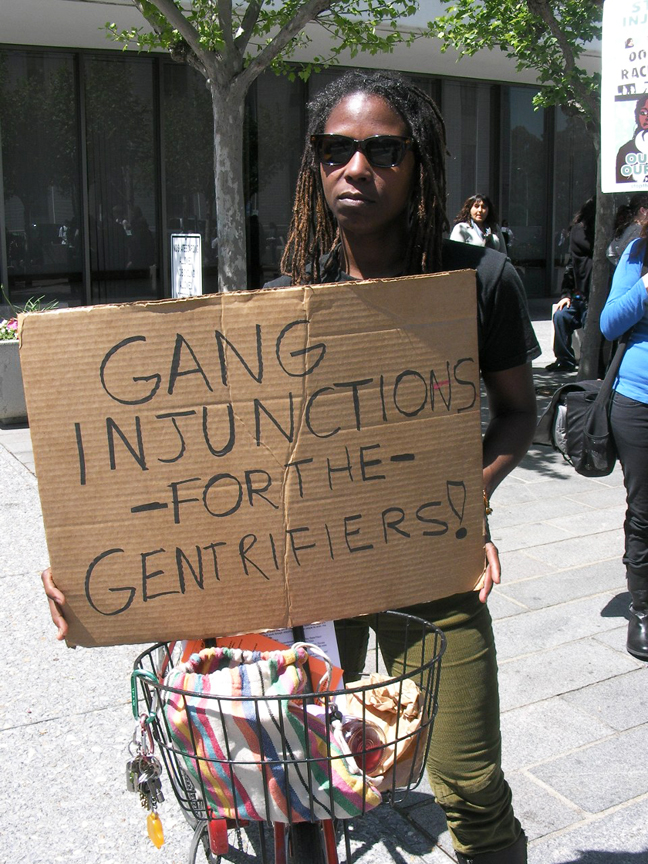 “To create real safety in our communities, we need to invest in education, community centers, affordable housing and jobs for youth, not more policing,” he explains. “This injunction will break up families, push people out of their neighborhoods and increase racial profiling. It will send young people to prison for associating with their friends or dressing a certain way. Our young people need more opportunity and support, not more police harassment.”

“Young people of color have been targeted by police intimidation for years. Just look at the long list of murders committed by the police in the last two years,” says George Galvis, an Oakland resident and community organizer with All of Us or None. “We must put a stop to police intimidation and racial profiling.”

“We are all Oscar Grant and we will never forget the type of brutality the police are capable of,” says Helia Rasti, an organizer with Critical Resistance, in reference to the 22-year-old father who was shot in the back by BART police last year.

The city plans to spend $430,000 to fund the North Oakland gang injunction and discussion is already underway to extend them into East and West Oakland. The injunction, proposed in February by Police Chief Batts and City Attorney John Russo, was not approved by the City Council due to its controversial nature and high costs.

“The more young people have to interact with cops, the worse off we will be,” says Doraius Lacy, a high school senior and East Oakland resident. “Instead of spending money criminalizing young people, an investment is needed to support us in reaching our full potential as adults who can bring about a safer and better future for us all.”

Margaret White, North Oakland resident and mother, says: “This racist injunction is simply a modern day version of Jim Crow and Black Code laws. This injunction will not stop violence, just as the ‘War on Drugs’ did not stop the flow of drugs running through our communities. Where is the investment in the future of our youth? Instead of locking them away, create opportunities so they too can hope for a brighter tomorrow.”

The newly formed group to stop the injunction meets weekly in North Oakland to discuss how the gang injunction will negatively impact their neighborhoods, communities and family members and to outline solutions that would address the root causes of violence in Oakland. At a community town hall on May 8, the discussion is expected to generate ideas for building community responses against violence that don’t involve police. The town hall will take place from 8 a.m. to 12 noon at Oakland City Council chambers, 1 Frank H. Ogawa Plaza.

For more information about the coalition to stop the injunction, visit http://stoptheinjunction.wordpress.com/. Material from there and from Indybay reporter jbp contributed to this story.