“There is no better (teacher) than adversity. Every defeat, every heartbreak, every loss, contains its own seed, its own lesson on how to improve your performance the next time.” – Malcolm X 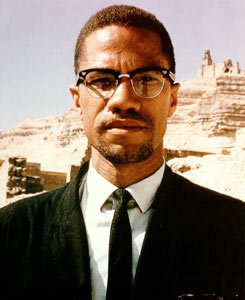 As we pause to remember the man named variously Malcolm Little, Red, Satan, Malcolm X, Malik El Hajj El Shabazz, Omowali, let us not do so in a passive, detached manner. Let us take time to really remember him for what he stood for and the courage he displayed on our behalf. Let us appreciate his intellectual courage and how he used his mind, his words and lifestyle to model what it means to a conscious self-actualized African.

In many ways Malcolm X was ahead of his time. While he acknowledged his debt to the Honorable Elijah Muhammad for helping him redeem his life, his natural intellectual inquisitiveness made him move beyond the confines of the Nation of Islam’s dogma.

For example, he was so incensed by the police murders of the mosque members in LA he called for retribution. While Mr. Muhammad’s stance was that God would deal with the dastardly devils who killed the men of the LA Temple, Malcolm spoke openly of “git back.” Malcolm not only spoke of Blackness as the NOI taught, he spoke about Africa. Malcolm took pride in Africa at a time when most of us were so ashamed about being African, if anyone called you an African you were ready to fight.

“I ain’t no African,” we would retort. Or we’d say, “Yo momma is an African” as rhetorical git back. Not only did Malcolm speak about the glories of Africa and African history, he gloried and promoted the African liberation struggle:

“You can’t separate the militancy that’s displayed on the African continent from the militancy that’s displayed right here among American Blacks. The positive image that is developing of Africans is also developing in the minds of Black Americans, and consequently they develop a more positive image of themselves. Then they take more positive steps – actions. So you can’t separate the African revolution from the mood of the Black man in America. Neither could the colonization of Africa be separated from the menial position that the Black man in this country was satisfied to stay in for so long. Since Africa has gotten its independence through revolution, you’ll notice the stepped-up cry against discrimination that has appeared in the Black community.” 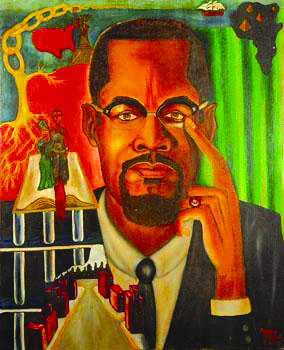 Malcolm spoke of U.S. imperialism in Africa when most of us were hoodwinked into believing the U.S. were the good guys. Not only did Malcolm disabuse us of those foolish and faulty notions, he railed against U.S. racism and its racist foreign policies. He envisioned dire consequences of U.S. thuggery around the world but particularly in Africa:

“Probably there is no better example of criminal activity against an oppressed people than the role the U.S. has been playing in the Congo, through her ties with Tshombe and the mercenaries. You can’t overlook the fact that Tshombe gets his money from the U.S. The money he uses to hire these mercenaries – these paid killers imported from South Africa – comes from the United States. The pilots that fly these planes have been trained by the U.S. The bombs themselves that are blowing apart the bodies of women and children come from the U.S. So I can only view the role of the United States in the Congo as a criminal role. And I think the seeds she is sowing in the Congo she will have to harvest. The chickens that she has turned loose over there have got to come home to roost.”

When President John F. Kennedy was murdered in Dallas, Texas, Malcolm made it a point to raise the issue of “the chickens have come home to roost,” meaning U.S. thuggery around the world had emboldened the criminal elites to do the same things here. Elijah Muhammad had instructed his ministers not to say anything inflammatory about Kennedy or his assassination; so when Malcolm said what he said and the U.S. media made a big issue of it, Mr. Muhammad had to discipline Malcolm.

Despite his disobedience to Mr. Muhammad’s order, Malcolm’s comments revealed a deep understanding and grasp of the geo-political realities of the day and a candor that is sorely lacking in today’s so-called leaders. Unfortunately Malcolm’s suspension provided the opportunity for the U.S. government to exploit the rift between him and the NOI to make their goal of “neutralizing” him that much easier. J. Edgar Hoover had put COINTELPRO in effect because they definitely didn’t want Malcolm X, El Hajj Malik El Shabazz, Omowali to be the messianic Black leader they dreaded so much.

As we celebrate his natal day, let us not reduce it to merely remembering a date and his name. Let us examine his life and take from it the valuable lessons needed, personally and collectively, to redeem ourselves, to fortify our struggle for freedom, human dignity and self-actualization. We cannot allow the fact he was murdered – assassinated – to dissuade us from pursuing our own emancipation from the bonds of Western psychopathy, degeneracy and decadence.

Malcolm said, “Anytime you beg another man to set you free you will never be free. Freedom is something you have to do for yourself. Until the American Negro lets the white man know that we are really ready and willing to pay the price that is necessary for freedom, our people will always be walking around here second class citizens or what you call 20th century slaves.” When asked what the price of freedom was, Malcolm replied succinctly, “The price of freedom is death.”

Death is not defeat, nor is it a disgrace. James Brown sang, “I’d rather die on my feet than live on my knees.” Death is inevitable to humans. To die fighting for freedom, dignity and justice is noble, while living in a subservient oppressive condition is demeaning. That is one of the lessons Malcolm and so many other taught us. Let’s learn and apply the lesson wisely.

Junious Ricardo Stanton is a freelance writer and internet radio host on www.harambeeradio.com and can be reached at jrswriter@comcast.net. To read his commentaries regularly, subscribe to the Sons of Afrika listserve at http://groups.yahoo.com/group/SOA/.