Take Back the Land: May will be a month of action 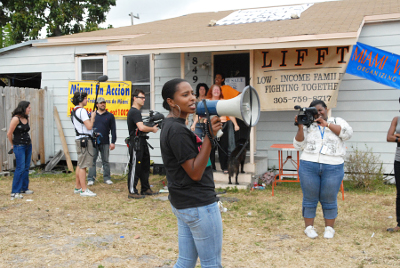 The housing bust and faulty government policies have immersed the United States in a full blown economic and housing crisis. The cruel irony of this crisis, and what makes it so profoundly immoral, is that the commodity at its root – housing – is not at all in scarcity. To the contrary, sufficient vacant housing stocks exist to accommodate virtually everyone in need, including families forced into overcrowded and substandard conditions as well as the homeless.

In the face of this severe economic crisis, people are rising up. They rail against the bailouts and bonuses, protest the lack of lending, rebel against unfair credit card rate hikes and, most dramatically, fight back against losing their homes.

The Take Back the Land Movement is calling for a May 2010 National Month of Action to assert the fundamental human right to housing and community control over land. Participating organizations, communities and families are asserting this right in two ways: by “liberating” government, foreclosed and warehoused homes, making them available for families with nowhere else to live and, by protecting families, our neighbors, from foreclosure related evictions from houses, apartments and condos as well as income related evictions from public housing.

Every family, indeed every human being, needs and deserves decent and adequate housing that they can afford, regardless of their income. However, instead of facilitating this need, federal, state and municipal governments are instituting policies and enacting legislation protecting the profits of corporations at the expense and exclusion of families. These policies serve only to compound, rather than end, the crisis. For example, the same financial institutions which caused the crisis, are both bailed out for their “toxic assets” and allowed to evict families and keep those assets vacant. In addition, federal and local governments are actively vacating, boarding up and demolishing public housing and underfunding rent subsidy programs in order to free up monies for bank bailouts and sports facilities. 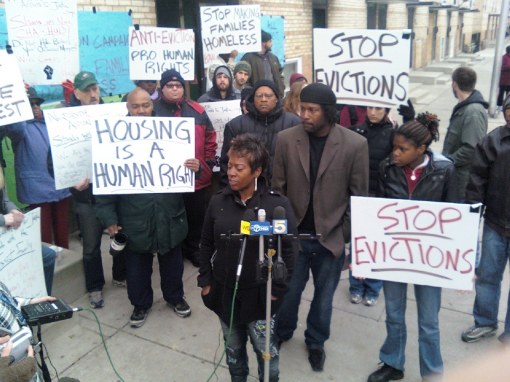 This series of policies and laws not only allows human beings to live on the street while hundreds of thousands of houses sit vacant, but the bailouts effectively compel struggling families to finance their own evictions and then subsidize hefty bonuses to the executives evicting them.

In the context of a severe housing crisis, policies and laws which impede the human right to housing are morally indefensible and, as such, must be directly challenged until they are changed. The May Month of Action will challenge those laws which prioritize corporate profits over human needs. This is an historic crisis, one which merits an historic response.

On Feb. 1, 1960, four North Carolina A&T students sat in at a Greensboro Woolworth’s lunch counter and stepped into history, sparking a movement and changing this society forever. The “sit-in” campaigns were predicated on the notion that legal equality was a human right and, as such, laws violating those rights were morally wrong and therefore must be directly challenged – and broken – in order to be changed.

Inspired by the 50th anniversary of the first sit-ins, the Take Back the Land Movement asserts that housing is a human right and, as such, the policies which violate that right are morally wrong and therefore must be directly challenged. As such, this May, organizations across the U.S. are engaging in “live-in” campaigns designed to house human beings and directly challenge those policies and laws that promote vacant housing during this housing crisis. 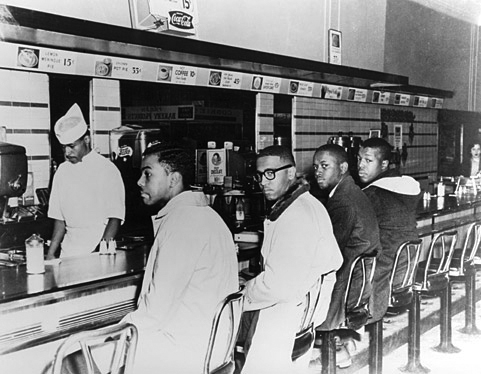 Civil disobedience campaigns directly challenge unjust laws by breaking them until they change. The Take Back the Land Movement and the live-in campaigns, however, encompass more than merely disobeying immoral laws: It is fundamentally about empowering communities to take control of their land and implementing the moral imperative of housing human beings. More than simple civil disobedience, the live-in campaign is in fact a movement of moral obedience.

Organizations in no less than 10 U.S. cities will help their family, friends and neighbors “live-in” vacant government owned or foreclosed homes, buildings or land by either moving them in or preventing their eviction. Organizations in cities like Boston, New York, Philadelphia and Washington, D.C., will be joined by others in Chicago, Miami, Sacramento and New Orleans. Smaller cities include Toledo, Ohio, Madison, Wisconsin, St. Petersburg, Florida and Portland, Oregon.

Of course, no social justice movement has ever been won in a single month or by utilizing a single tactic or strategy. As such, May 2010 is not the totality, but rather the dawn of a movement whose aims are to elevate housing to the level of a human right and to win community control over land.

The solution to the housing crisis lies in your community, even on your block, and in your hands. The time has come to Take Back the Land.

Trailer for Documentary on UN Housing Mission to US – Released March 5, 2010 from NESRI on Vimeo.

This is a trailer of a soon to be released documentary about the United Nations Special Rapporteur on the Right to Adequate Housing’s first official fact finding mission to the United States in the Fall of 2009. This trailer was produced for an event entitled “The Housing Rights Situation in the US” which took place at the UN Headquarters in Geneva, Switzerland, on March 5, 2010. Earlier that same day the Special Rapporteur presented the UN Human Rights Council her report based on her mission to the US.

The video is being produced by NESRI, the Campaign to Restore National Housing Rights and Housing is a Human Right. It was shot by volunteer videographers, audio recorders and photographers from around the US and is being edited by a team of volunteer video editors based in New York City. For more information, visit NESRI.ORG.