On Friday, June 25, the BART cop who pulled the trigger unjustifiably killing Oscar Grant a year and a half ago, on New Year’s of 2009 on a BART station platform in East Oakland, Johannes Mehserle, wrapped up his testimony in one of the most important murder trials of the last 20 years. The courtroom was filled to capacity with reporters, Grant’s family and friends, and concerned community members.

Mehserle began the morning with, “My main focus was on his (Grant’s) hands going into his right pocket. I remember the digging motion with his right hand. I was pulling as hard as I could to get it out. I made the decision at that point to tase him,” said Johannes Mehserle on the witness stand. “I didn’t know what his intentions were. I remember saying I’m going to tase him twice.” Mehserle made it clear that his defense was that he thought that Oscar Grant had a gun. “I thought that I didn’t want to get shot.”

“I stood up to create distance, so the taser would work,” said Mehserle as he tried to justify tasing an unarmed 150-170-pound person who was under the restraint of two police officers who are over 6 feet and 250 pounds each. “I remember the pop, that wasn’t very loud. It wasn’t like a gunshot. I remember thinking, ‘What went wrong with the taser?’”

Then Mehserle broke out into a theatrical sob that should have won him an award. Through his tears and red flushed face, he continued: “I looked at my right hand. I didn’t know what to think. It (his 40 caliber revolver) shouldn’t have been there. I remember Oscar Grant saying, ‘You shot me!’” At that point Oscar Grant’s mother, Wanda Johnson, marched out of the courtroom.

About 20 seconds later, Tim Killings from Oakland began to march out, and he shouted, “You should save those fuckin’ tears, dude.” The presiding judge, Robert Perry, demanded that Killings be arrested for contempt.

Tim Killings was one of six Black males under 40 who were banned from the courtroom that day. The others were Jabari Shaw, poet Ghetto Prophet, Jovan Cochran, myself and Anyi Howell of Youth Radio, who was also held in contempt for plugging his turned off cell phone into an empty socket in the courtroom. Tim Killings, who is being held without bail, will go to court on Tuesday, and Anyi Howell goes to court on Wednesday to face his charges.

The political climate that allowed six out of the seven Black males under 40 to be banned from the courtroom is consistent with the track record of this case: The trial was moved out of Alameda County because of defense claims that Blacks in the area could not be unbiased, and no Black people were picked to sit on the Los Angeles jury.

Another point that must be documented is that the LA Sentinel, the biggest Black newspaper in Los Angeles, was denied entry to Mehserle’s testimony under the pretext that the courtroom was too full. That brings to three the number of Black journalists excluded Friday: Anyi Howell of Youth Radio, the Sentinel editor and myself.

The judge, who was angry at Killings’ remarks, shouted, “I will clear the courtroom of everyone, even the press, if we have any more outbursts.” He then declared a five-minute recess. When Mehserle left the witness stand, which was after the jury had left the room, he was no longer crying.

The defense ended its line of questions by asking Mehserle to speak directly to the jury. He said, “I didn’t intend to shoot Mr. Grant. I meant to tase him.”

The prosecution started off by asking Mehserle how much time he spent preparing for this day in court. The defense lawyer kept objecting, and Mehserle acted confused as if he did not understand the line of questioning, which was designed to show that Mehserle rehearsed his theatrics for months before the murder trial got underway. Mehserle finally conceded to preparing “more than an hour.” 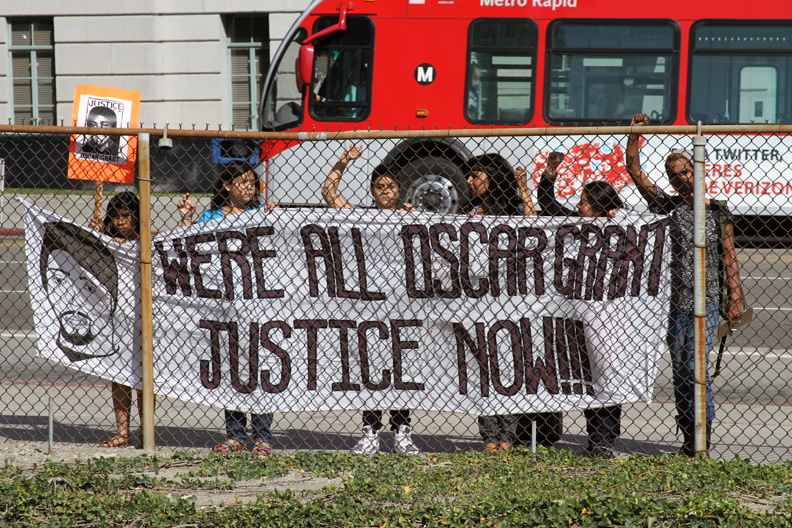 Mehserle’s defense objected to the prosecutor’s questions to Mehserle, “Is it true that you currently live in LA with members of the defense team?” and “Did you ever do any role-playing in your preparation for the case?”

The prosecutor saw it as his mission to prove that Mehserle meant to shoot Oscar Grant. It was never his intention to tase him. Under cross-examination, Mehserle blurted out, “In my mind, I thought he was going for a gun.” The prosecutor asked, “When you watched the video, did you hear yourself say, I’m going to tase him?” Mehserle replied, “No.”

The prosecutor continued, “Why did you fire (what you thought was a taser) when Officer Pirone was in such close proximity (because the tase would shock anyone touching the victim)?” Mehserle answered, “I knew I had to act very fast with the taser.” The prosecutor fired back, “Because you were going against a gun?”

“Yes,” said Mehserle. Then the prosecutor asked him what effect does being tased have on the body. He answered that tasing makes the body tighten up. Stein then unloaded his legal nuclear bomb on Mehserle when he asked him, “Why would you want a hand holding a gun to constrict?” Mehserle answered, “I wasn’t thinking about that.”

Mehserle later admitted on the stand that he never called for medical assistance in what he was trying to define as an accidental shooting, as well as he never told any of the other police officers on the platform or at the BART police station headquarters that he meant to pull out his taser. The day ended with the family, friends and supporters of Oscar Grant feeling good about how the prosecutor pulverized Johannes Mehserle on the stand.

The last action of the court, after court had been adjourned, was to ban me for what a baliff said that I said. He lied and said that I told witnesses that I was going to put bullets in their back. This couldn’t be further from the truth. The bailiff claimed the judge said that I couldn’t come back into the courtroom and if I did, I would be arrested. I spoke with a supervisor, who told me to come back and that the particular bailiff that lied on me may not be working the front door of the Mehserle courtroom. He also told me that he would only enforce the ban if the judge enforced it.

It was another day in the Los Angeles Jim Crow courtroom of Robert Perry. It showed us how much things have not changed in this country, since the time when it was openly said that a Black man has no rights that whites – in this case, pigs – are bound to respect.

On Friday June 25, 2010, Oakland resident Timothy Killings who was watching the Johannes Mehserle trial could not contain himself in court and shouted out to Mehserle, “Save those fucking tears” when he was testifying about shooting Oscar Grant.

During direct examination by Michael Rains, Mehserle began to sob when talking about shooting Grant with his weapon. The family and other court room spectators where not moved by Mehserle’s display of emotion and Grant’s mother, Wanda Johnson, got up and walked out of court.

Killings was released from the Los Angeles County Jail on Monday and was back at the courthouse on Tuesday morning to support justice for Oscar Grant. He cannot visit the courtroom and he has been barred from the ninth floor.