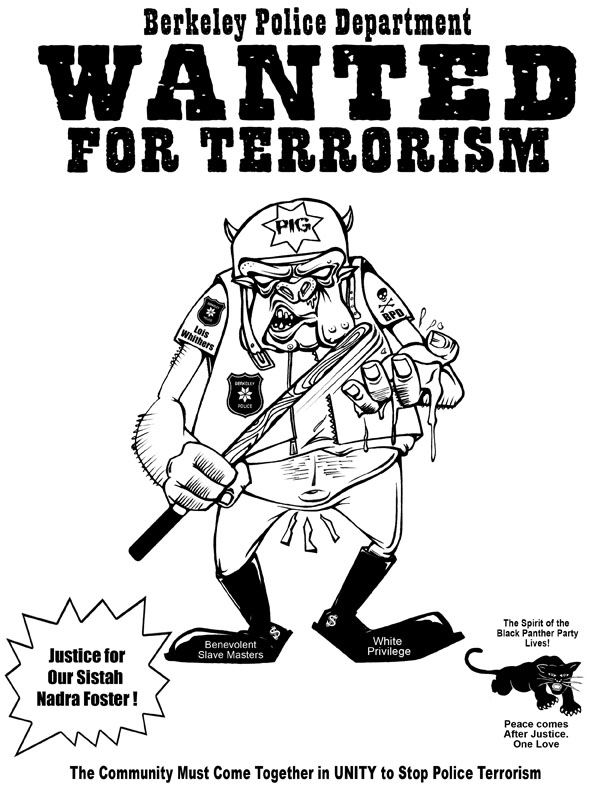 In the past few days, KPFA has broadcast at least twice a brief announcement recorded by the interim general manager scolding Bay View associate editor JR Valrey for a passing mention in one of his Block Reports of KPFA’s former interim program manager, Sasha Lilley. The Bay View respectfully questions its timing and refutes its contentions. Here’s the entire announcement as it was broadcast on June 14 at 5:59 p.m. following Flashpoints and preceding the Evening News:

“Greetings. My name is Ahmad Anderson, Pacifica Foundation human resources director and interim general manager of KPFA Radio. In a report broadcast on Flashpoints Wednesday, March 31, Block Report host JR Valrey erroneously claimed that KPFA’s Sasha Lilley was demoted from her job. It was also falsely asserted that she was involved in calling the police to KPFA to arrest Nadra Foster. Both of these statements are completely false. Sasha Lilley was neither demoted from her job nor was she party to the police incident involving Ms. Foster. Pacifica and KPFA deeply regret that this report went out over the airwaves at KPFA and Pacifica affiliate stations. We apologize to Ms. Lilley for the erroneous report and any harm or discouragement she may have suffered as a consequence.”

While we at the Bay View have high hopes for improved management at KPFA under interim General Manager Ahmad Anderson, we must take issue with his announcement on several points. First, we’re curious why he waited two and a half months to object to a March 31 broadcast, when in all this time he has never discussed his objections with Valrey.

Secondly, why are KPFA and Pacifica apologizing to Sasha Lilley when they’ve never apologized to Nadra Foster, whose left hand remains paralyzed since she was brutalized by over a dozen police officers inside the radio station on Aug. 20, 2008? She describes the attack and its consequences in the March 31 Block Report Anderson objects to in his announcement.

That Block Report was an interview by Valrey with Nadra Foster on the last day of work at KPFA for former General Manager Lemlem Rijio, who was replaced by Anderson. The purpose of the interview, Valrey explains in the broadcast, was to let Foster tell “her side of the story.”

To put Valrey’s fleeting mention of Sasha Lilley during that Block Report in context, here is the question Valrey asks Foster that refers to Lilley: “What are your thoughts on the fact that Lemlem Rijio, who is the East African-born general manager or I should say interim general manager – today is her last day – she’s leaving. Lois Withers, who is responsible for calling the police, she’s gone. The woman who was the human resources person at Pacifica who gave the OK to call the police, she’s gone. Sasha Lilley was demoted, who was at that time the interim program director. So she’s no longer in a management space. And at the same time, KPFA has not admitted any wrongdoing. As well as Nicole Sawaya, who was executive director of Pacifica and was on the scene while this terrorism was taking place. None of these people have [those] jobs or are employed any more. Yet KPFA and Pacifica have not admitted any wrongdoing in your case. What do you think about that?”

KPFA’s management announcement defending and apologizing to Sasha Lilley contends that Lilley was not demoted. However, long time regular listeners to KPFA like me can testify that at the time Foster was brutalized, Sasha Lilley was indeed the station’s interim program director. Though so far as I know the circumstances of her departure from that position have never been made public, Lilley no longer has that or any management job, though she remains a KPFA programmer. Whether her changed position amounts to a demotion is a matter of semantics.

Finally, the claim made in the announcement that Lilley was not “party to the police incident involving Ms. Foster” is amply refuted by the Bay View’s coverage, which specifically documents the involvement of Sasha Lilley. In the first of many stories in the Bay View on the police beating of Foster, Valrey wrote on Aug. 25, 2008, in “Police terrorize Black KPFA programmer in the station: 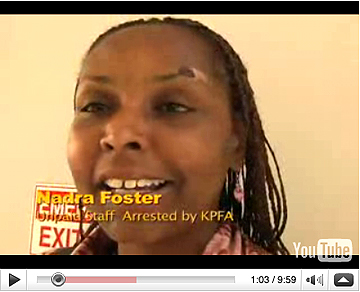 “Two male police officers slammed Nadra to the ground, kneeing her in the groin in the process, as well as severely spraining her arm. A number of KPFA broadcasters saw what happened, including Anita Johnson of Hard Knock Radio, who was in tears pleading with the management and other people at the station to get involved and help Nadra, to no avail.

“Weyland Southon of Hard Knock Radio taped Nadra’s chilling screams as the police were slamming her to the ground and twisting her arm. He also taped Nicole Sawaya, the executive director of the Pacifica Foundation, slapping his camera out of his hand on the scene. (Watch Weyland’s video at www.blockreportradio.com [and below].)

“Interim Program Director Sasha Lilley was also an eyewitness to this act of management-initiated police terrorism, yet did nothing in defense of Nadra’s human rights. Initially charged with several felonies, her bail set at $81,500, Nadra spent two days in jail and is now facing five misdemeanors, including trespassing, two assault on a police officer charges and two charges of resisting arrest.”

Anita Johnson, producer and host of the daily 4 p.m. KPFA show Hard Knock Radio, wrote in the Bay View on Aug. 27 in “What really happened to Nadra Foster: an eyewitness account”: 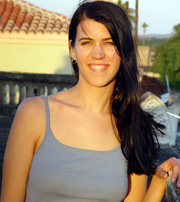 “At this point interim Program Director Sasha Lilley appears. I ask her for help and say, ‘What is happening?’ She says, ‘We called the police.’ I ask: ‘Why? Wasn’t there another option? You all could have talked to me.’ I’m hysterical, frustrated and feeling totally helpless. I again ask Sasha for help, saying, ‘Someone needs to stop this.’ Sasha says to the officers: ‘We don’t want to press charges. Stop this.’

“The police continue their assault on Nadra, who is still screaming and struggling. I attempt to re-enter Ujima but the police tell me, ‘Get out or you’ll be next!’ One officer advises me that it is in my best interest to leave and to stop taking pictures.”

The beating of Nadra Foster remains after nearly two years an extremely contentious and painful issue at KPFA with both staff and listeners. The new interim general manager’s announcement confirms the need for open discussion and accountability by station and network management for calling the police and failing to offer any support to the deeply wronged victim.

“But to all those who were present, I want to know how you could passively watch your colleague and my dear friend – who has been so good to me she’s like a daughter, a mild-mannered, soft-spoken, dedicated person; who else volunteers their time for 12 years to serve their community? – be beat down several times by a gang of pigs and do nothing? In short, I want to know why none of you was arrested for resisting arrest?”

“Nine years have passed since Pacifica radio station KPFA, the seminal community radio outlet founded by pacifist Lew Hill in 1949, last had the police inside its doors to arrest its workers. But on Aug. 20, 2008, the Berkeley police were again summoned to 1929 Martin Luther King Jr. Way and asked to eject programmer Nadra Foster, who had been allegedly banned for a disagreement involving usage of a copier.

“Sixty-nine [now 74] of the station’s workers, paid and unpaid alike, have joined together to condemn what they describe as a growing atmosphere of intimidation, including increased security measures, restrictions on airing discussion of internal issues, the return of banning individuals from the premises and the use of police force to address non-violent policy issues.”

At my request, Bay View associate editor JR Valrey, known on the block and to Block Report listeners and to Bay View readers as POCC Minister of Information JR, emailed his response today to the KPFA management announcement:

“I am highly offended that KPFA management has been running a PSA about me, attacking my integrity and credibility on a daily basis while I am on assignment covering the police murder of Oscar Grant and the murder trial of Johannes Mehserle in Los Angeles. It is odd to me that KPFA management and the KPFA News Department would criticize my language in a report that I did about the police beating of Nadra Foster inside of KPFA in August of 2008, without ever acknowledging or taking responsibility for an incident where a Black woman broadcaster was beaten after KPFA management falsely claimed she was trespassing.

“When I return from this journalistic mission, I plan to make myself available and accountable to the community of people who want see a more accountable KPFA. I would like to invite my accusers to a public forum or a number of forums so that these charges can be addressed publicly in a fair manner. I will be more thorough when I return.”

Video of the attack on Nadra Foster

This is the video shot by KPFA Hard Knock Radio producer and host Weyland Southon as Nadra Foster was being beaten by police. Posted to SFBayView.com as “Arrest of KPFA programmer Nadra Foster by KPFA/Pacifica management,” it was posted to YouTube by the Labor Video Project with the following note, which also mentions the role of Sasha Lilley:

laborvideo — October 10, 2008 — On 8/20/2008, KPFA-Pacifica management, supported by “Concerned Listeners,” called the police to remove community programmer Nadra Foster from the station. They told the police she was trespassing on private property, and she was beaten and arrested. They were also supported in this action by the Pacifica Executive Director Nicole Sawaya. In fact, Sawaya also sought to physically block a KPFA Hard Knock Radio staff member Weyland Southon from videotaping this police action, and you can see her in the video seeking to knock the camera so the incident could not be videotaped.

Sawaya was supported by pro-management staffer Kris Welch, who was standing by the door, and Interim Program Director Sasha Lilley, who walked by while the police were carrying out their attack and later supported a statement by station management and management supporters defending their actions.