In the court hearing today regarding defense attorney Michael Rains’ motion to exclude Oscar Grant’s fiancé Sophina Mesa from testifying about Grant’s fear of tasers, it was discussed that Oscar Grant took a photo with his sister’s mobile phone of Johannes Mehserle pointing a taser at him. That photo taken by Grant on Chantay Moore’s mobile phone will be introduced as evidence in the trial.

Mehserle’s taser confusion defense looks a lot less credible if during the two minutes he was on the platform he had pulled out his actual taser, pointed it at Oscar Grant, and put it back in its holster before he then drew his gun and shot Grant in the back.

No one – not the public, family or friends – knew this photo existed before Rains’ motion to exclude Sophina Mesa was opposed by the DA.

The defense motions were 1) to exclude Oscar Grant’s fiance Sophina Mesa from testifying, 2) to deny the prosecution the right to present its own edited version of videos shot on the scene (the defense had already been granted the right to present an edited version of videos and to have its own “expert” interpret that video for the jury) and 3) to exclude the fact that Tony Pirone yelled “bitch ass nigger” at Oscar Grant moments before Mehserle shot him in the back.

Dave Id is a journalist and activist who has thoroughly documented the Justice for Oscar Grant Movement in prolific postings at http://indybay.org/oscargrant, where this story first appeared.

Editor’s note: A comment to this story on Indybay begins, “Who would have thought that Oscar himself may help convict his very own killer.” 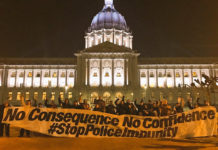