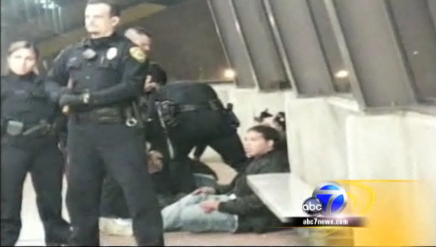 The prosecution in People of the State of California v. Johannes Mehserle has rested its case. Mehserle has been charged with murder in the New Year’s Day 2009 shooting death of 22-year-old Oscar Grant. The trial was ordered moved to Los Angeles last fall due to extensive pretrial publicity and concerns about the fairness of jurors.

Spruill, an expert witness in group dynamics and crowd control techniques, testified briefly as to the various classes or groupings of people and the emotional and psychological dynamics at play that officers need to be aware of.

Asked by Deputy District Attorney David Stein what officers are taught when they see a fellow officer “losing control,” Spruill replied, “It’s important that we not make our jobs harder. We are responsible for each other. That’s basic learning; cadets don’t leave the academy until they master this.”

Spruill is also an instructor at the Napa Valley Academy that Mehserle attended. He told the court he was not familiar with Anthony Pirone, Mehserle’s former fellow Bay Area Rapid Transit (BART) Officer.

Vicki Long, the Alameda County audio and video technician who testified during the first day of trial, was recalled to the stand to verify and explain a synchronized version of the six videos used in the case. It was the first time that Stein played all six videos simultaneously.

The videos shot by BART riders that New Year’s Day morning and the surveillance camera at the station all begin and end at disparate times. However, all of them make for a somewhat coherent accounting of the events that led to Mehserle’s fatal shooting of an unarmed and prone Oscar Grant on the Fruitvale BART platform.

The surveillance video shows the Dublin (south)-bound train pulling into the Fruitvale station and passengers getting off and leaving the platform. After approximately four minutes, one group of passengers – later identified as friends of Oscar Grant – can be seen leaving from the lead car of the train as former officer Tony Pirone passes them. At this point, Carlos Reyes, Jackie Bryson and Nigel Bryson are detained by Pirone and told to sit against the platform wall.

Former officer Marysol Domenici then arrives on the nearly-empty platform to watch over the three young men against the wall, as Pirone can be seen walking alongside the train pointing his Taser at the window until he comes to an opening and Oscar Grant walks out. Pirone then escorts him over to the wall where the other three are waiting.

Although it is not captured on film, Pirone returns to the train to detain Michael Greer. Pirone grabs Greer by his collar and takes him off the train throwing him into the concrete wall, then violently slamming him down on the ground, according to witness testimony.

At this point the witnesses began turning on their digital cameras to record what is happening in front of their eyes. The various videos go on to show Pirone assaulting Grant, Mehserle and his partner arriving on the platform and Mehserle’s shooting of Grant approximately two minutes later.

Morning testimony in the case began with Keecha Williams, the BART train operator that morning who had received an intercom call about a fight aboard the train as she pulled into the Fruitvale station. The call came from a woman who was talking excitedly, Williams said

A second by a different rider came over the intercom and said there were Black males involved who were dressed in all black. Williams said she looked out her window and saw a group of Black males and one Hispanic woman standing on the platform. One of the young men in the group, identified by Williams as Nigel Bryson, asked her if “5-0 was coming?” She nodded her head and the young man told the group that they should leave.

Williams would go on to contradict much of the testimony of former officer Pirone by stating that he never asked her if any of the young men he detained were involved in the fight, that he never asked her who she thought was involved and that she did not state that the young men placed against the concrete wall were the ones involved in the fight. Pirone then proceeds to walk down the platform where he eventually pulls Grant and Greer off the train.

After Pirone begins his assault of Greer, Williams testified that a third call was placed to her over the intercom by a woman who requests that the train move or the doors be closed because she “doesn’t want to get shot.”

Mehserle’s defense attorney, Michael Rains, is scheduled to begin presenting his case on Tuesday, June 22, with the questioning of Alex Hidas, the San Leandro police officer who used a Taser on Grant in 2006.

Thandisizwe Chimurenga is a community journalist and a founder and host of Some of Us Are Brave, a Black women’s public affairs show on KPFK-Pacifica Los Angeles. She has worked with the L.A. Watts Times newspaper, the KPFK Evening News and Free Speech Radio News. She is currently covering the trial of Johannes Mehserle, the killer of Oscar Grant, for the Bay View and several other Bay Area news organizations. She can be reached at tchimurenga@gmail.com. Follow @OscarGrantTrial. L.A. Times reporter Jack Leonard contributed to this report.

Pirone expected to take stand after delay in trial

Minister of Information JR is FREE!