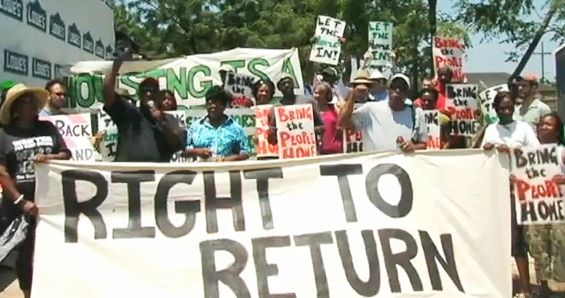 New Orleans – On Friday, May 28, at 1:30 p.m., the Survivors Village organization stormed and sat in at the offices of the Columbia Parc apartments. The complex sits on top of the land of what used to be the St. Bernard public housing complex. The complex was destroyed after Hurricane Katrina and all 1,500 families were removed.

The new units are primarily market rate with approximately 130 set aside for public housing. So far, only 21 of the low-income apartments have been rented, but Fox News reported HANO (Housing Authority of New Orleans) wouldn’t say how many if any have been rented to returning residents.

Housing rights leader Stephanie Mingo said she was offered one of the Columbia Parc units, but “I want everybody in,” she declared. Questioning the new rules, she explained: “You have to be inside at 10 o’clock. And I’m quite sure everybody’s parents already raised them, and we don’t need to be raised no more!” Also, residents must work at least 20 hours per week unless they are elderly or disabled and must pass a criminal background check and a credit check.

Police on the scene were attempting to decide what to do: continue to allow Survivors Village to protest or arrest them for trespassing on what is still public land. Almost 100 protesters were in the lobby. Video and pictures are on takebacktheland.org, communitiesrising.wordpress.com and youtube.com/watch?v=Gu3gzq5EJ5s. 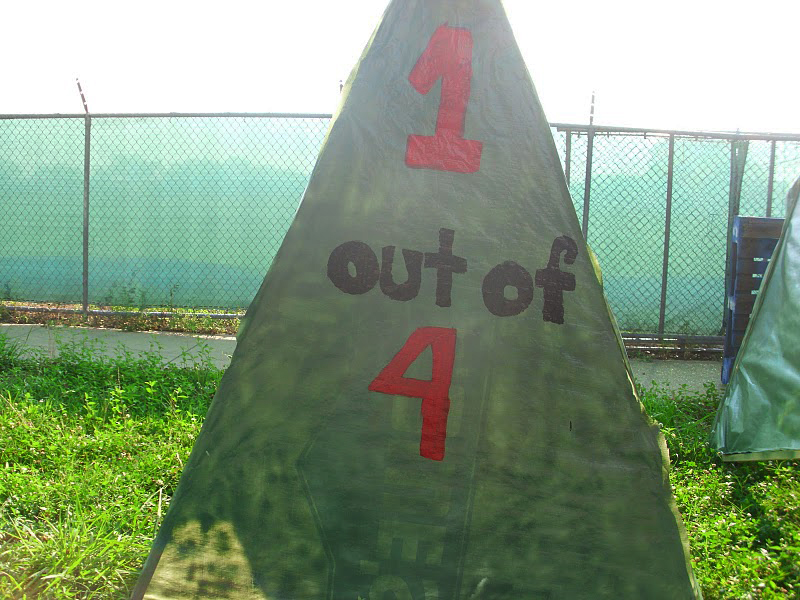 Survivors Village organized the Right to Return Weekend to assert the unconditional human right to housing and to highlight the failure of local and national officials to address the fact that more than one out four New Orleanians are still displaced, that all but one public housing development have been demolished and the city’s homeless population has ballooned to well over 20,000 people.

St. Bernard residents and supporters have erected a tent city on public land outside of where the St. Bernard Housing Development used to be. The Freedom Encampment reaffirms the right of community control over their land and asserts people’s fundamental human rights – to the unconditional right of return. Those of you in New Orleans are welcome to come out and join us in taking a stand for the right of return and the human right to housing.

With over one out four New Orleanians still displaced from Hurricane Katrina, all but one public housing development demolished and over 20,000 people homeless, local housing advocacy groups are hosting the Right to Return Weekend to raise awareness that housing IS a human right.

The Right to Return Weekend challenges the forced removal of all public housing residents following Hurricane Katrina and the discriminatory policies of the government to permanently displace low-income Black communities from the “new” New Orleans. Columbia Parc and HANO claim that 130 of the new units will be affordable housing units. However, HANO officials are now on record stating that anyone who claimed that former housing residents would be able to return “was lying.”

The former renters of St. Bernard are not alone. Housing recovery is moving much slower for renters than homeowners across the New Orleans metro region. Though renters made up 70 percent of the pre-Katrina population, few programs have been put in place to ensure their return. Most government funds have gone to renovation programs run by private companies.

“It is inexcusable to have this much vacant land and property in the hands of banks and the city government during this ongoing housing crisis. People have the right to live in and develop land and buildings that they can live in,” says Stephanie Mingo of Survivors Village.

The Right to Return Weekend continued Sunday with a home reclamation in the St. Bernard community to shelter homeless and displaced New Orleans residents. The objective is to shelter residents in need in the vacant properties being warehoused by the Road Home Program. 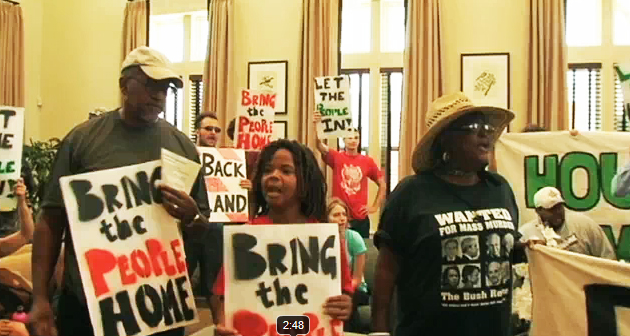 Survivors Village, MayDay NOLA and the Take Back the Land Movement assert with the Right of Return Weekend that all displaced and dispossessed residents have the unconditional right of return to their homes and communities, particularly the homeless and public housing residents forcibly relocated by the federal government after Hurricane Katrina. The demolition of public housing has exacerbated the problems of homelessness in the city.

“It is inexcusable to have this much vacant land and property in the hands of banks and the city government during this ongoing housing crisis. People have the right to live in and develop land and buildings that they can live in,” says Stephanie Mingo of Survivors Village.

The Road Home Program owns the property being occupied. Advocates believe that converting and utilizing property owned by the government and bailed-out banks for housing is a logical and practical solution to the ongoing housing and homeless crisis.

Survivors Village is affiliated with the Take Back the Land Movement, and the Right of Return Weekend is part of the May month of actions called by Take Back the Land Movement, a network of autonomous organizations affiliated with the US Human Rights Network (USHRN) dedicated to realizing the human right to adequate housing and community control over land.

N’COBRA, the National Coalition of Blacks for Reparations in America, is coming to New Orleans June 24-27 for its 21st Annual National Conference, to be held at Frederick Douglass High School, 3820 St. Claude Ave. Thursday is a day of service, with conference goers working on restoration of the host school. Meetings run all day Friday through Sunday, culminating Saturday night, 7-10 p.m., in a tradition second-line parade followed by a town hall meeting with local residents on the right to return. For more information, call New Orleans N’COBRA at (504) 324-2370 or email ncobra_no2@hotmail.com.

Survivors of mass incarceration speak truth to power at Spirit of...