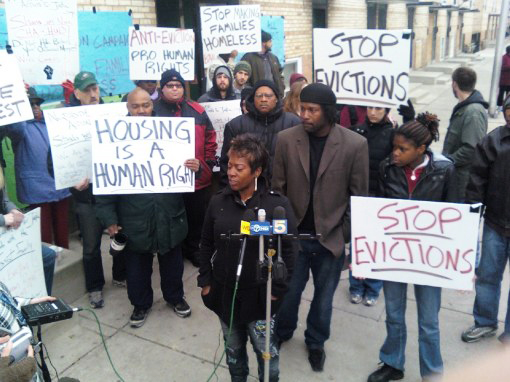 Organizations across the U.S. are engaging in “housing liberation” and “housing defense” to exercise their human rights to housing. Here are a few examples.

In Madison, Wisconsin, the grassroots organization Operation Welcome Home helped Desiree Wilson, 24, a mother with two small children, to move into a vacant house, hook up utilities and change the locks, according to nbc15.com in Madison. The home was vacant due to foreclosure. Bank of America owns the home now. “It’s not against the law,” said Ms. Wilson. “This is above the law. It’s just so much bigger than me. Housing is a human right.”

Operation Welcome Home held a press conference criticizing the billions of dollars in bailouts to mortgage lenders. “We’re asking them to turn over the property to the community whose tax dollars are funding what they are doing.” One of the spokespersons for the group, Z!Haukness, reminded people that “housing is a human right, no matter what income, no matter what rental history.” The group plans more “liberations” of other vacant property. 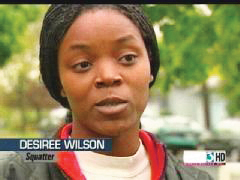 A local land trust, Madison Area Community Land Trust, says if the activists convince the bank to donate the home, the trust can find the resources to turn it into affordable housing. Taking over the vacant foreclosed property is “a brave move,” says Michael Carlson of the Madison trust. Carlson told the Madison Cap Times, “They’re compelling the citizens of Dane County to confront the very real contradictions in the way we provide housing – massive surpluses in the market that led to a collapse in credit and simultaneously people without shelter and permanent affordable housing.”

A Toledo, Ohio, factory worker, Keith Sadler, lost his home of 20 years at a foreclosure sale for $33,000. When it came time to be evicted, Keith had had enough. According to toledoblade.com, he and 6 friends barricaded the house up to resist the foreclosure eviction. All were members of the Toledo Foreclosure Defense League. After five days the house was raided by the local SWAT team and all were arrested on misdemeanor charges and released.

In Portland, Oregon, a local group, Right 2 Survive, seized control of vacant land in front of an abandoned school. They set up tents for the un-housed. “This is a celebration because we are taking our rights back,” Julie McCurdy told Take Back the Land. “What we’re doing is coming up with the solutions tailored for our community. We are tired of waiting for city hall to come up with revised plans and rehashed ordinances that do not meet the needs of un-housed Portlanders.”

A faith-based group has been moving families into vacant homes in Sacramento. The Poor People’s Economic Human Rights Campaign moved a family into a vacant home in Philadelphia. The Chicago Anti-eviction Campaign marched to protect a family from eviction and the Malcolm X Grassroots Movement protested auctions of family homes on the county courthouse steps of Atlanta.

Housing as a Human Right

Housing is a human right recognized by a number of international human rights laws. For example, the Universal Declaration of Human Rights, adopted after the Second World War, promised, “Everyone has the right to a standard of living adequate for the health and well-being of himself and his family, including food, clothing, housing and medical care and necessary social services, and the right to security in the event of unemployment, sickness, disability, widowhood, old age or other lack of livelihood.”

Still, the National Coalition for the Homeless estimates of the number of homeless people in the U.S. ranges from 1.6 to 3.5 million.

Foreclosures are soaring. Some housing experts say 4 million foreclosures are possible in 2010. In 2009, 3.4 million homes got foreclosure notices, auction sale notices or bank repossessions. In the first quarter of 2010, RealtyTrac reported there were 932,000 foreclosures. Auctions were scheduled on 369,000 homes in the same period. Banks repossessed 257,000 homes during that time.

Organizations working to exercise peoples’ human rights to housing include Take Back the Land and the US Human Rights Network. Both are working with local community organizations to support their campaigns.

Bill Quigley is legal director of the Center for Constitutional Rights and a professor of law at Loyola University New Orleans. His email is quigley77@gmail.com.