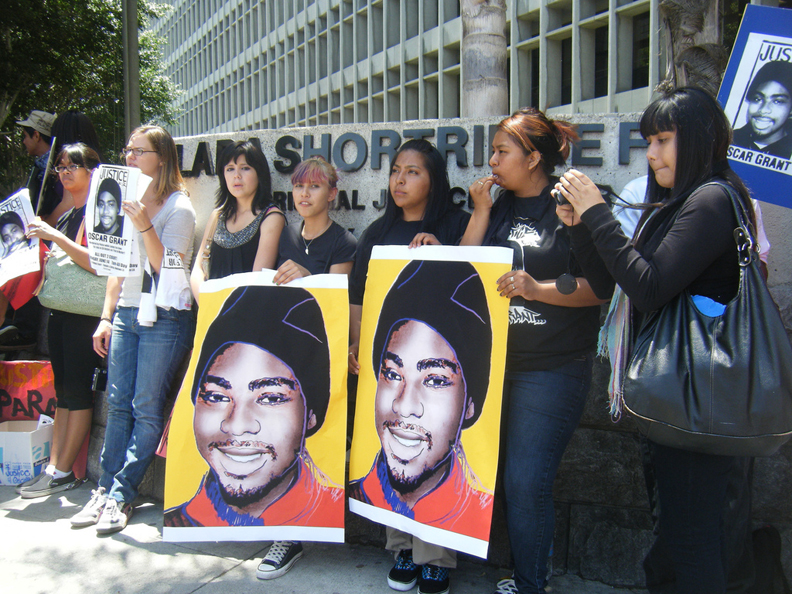 After 13 days of testimony, the defense rested Tuesday, June 29, in People v. Johannes Mehserle with the calling of Dr. Thomas Rogers to the stand. A 31-year forensic pathologist and a physician of 40 years, Rogers was wheeled into the courtroom due to recent surgery on his foot.

Defense attorney Michael Rains has argued that Oscar Grant, the 22-year-old Hayward man shot and killed by his client, was actively resisting Mehserle’s attempts to handcuff him. Specifically, Rains says that Grant was moving, his left shoulder coming up off the Fruitvale BART platform floor, at the time he was shot in the back.

Dr. Rogers authored the autopsy protocol which stated Grant’s cause of death was a gunshot wound to the torso. The entrance wound, just to the left of the center of the back, was ovoid in nature. Rogers, almost as if he sensed a coming question, said he “doesn’t attach any significance to ovoid … Sometimes angles can be determined from entrance wounds and sometimes they cannot.”

The bullet traveled left to right in Grant’s body, puncturing his right lung, and landing in his right breast bone, just above where the right nipple would be located. Jack Bryson, father of two sons who were with Oscar Grant that fateful morning, left the courtroom, he said later, so as not to hear any more.

The bullet traveled in an upward direction at an approximate angle of 30-40 degrees, said Dr. Rogers, as Wanda Johnson, mother of Oscar Grant, began to weep quietly.

Rogers noted a reddish abrasion on Grant’s right arm, just above his elbow. A blood pressure cuff was still attached to Grant’s arm when his body arrived at the coroner’s office. Rains repeated that the abrasion was located on Grant’s right arm – the arm that Mehserle alleges he had difficulty getting a hold of – but Rogers stated that procedures at the hospital could not be ruled out as a factor for the abrasion.

The doctor also noted that Grant had evidence of hemorrhage in the central nervous system. Rogers stated that, once he was able to look underneath Grant’s skin, there was evidence of blunt force trauma to the left side of Grant’s head, just above his ear.

It was at this point that Oscar Grant’s mother began to weep uncontrollably. Her brother, Cephus “Bobby” Johnson, put his arm around her and held her, as the judge excused the jury for a five minute break. Johnson was eventually led out of the courtroom and Dr. Rogers continued his testimony.

“No life-saving mechanisms on the platform would have helped Mr. Grant,” he said. Surgical intervention was necessary.

Rains produced a chart with a drawing of two bodies, one laying flat, the other with its left shoulder raised at an angle. Rains, with the assistance of Michael Schott, a forensic video image analyst, asserted that Grant’s left shoulder was rising up off the Fruitvale platform. Rogers said the drawings, one with a horizontal line drawn through it and the other with a straight line, represented “both scenarios” in terms of an entrance wound; Grant could have been lying flat on his back and Mehserle could have shot him at angle.

The answer was no. “I can hit my arm,” he said, slapping his forearm. “That’s blunt force trauma but there’d be no evidence of it.”

The defense rested at 10:30 a.m. and the remainder of the day focused on rebuttal testimony with witnesses called by the prosecution.

Stein called BART officers Emory Knudtson, Edgardo Alvarez and Kevin Franklin, who all stated that Mehserle never mentioned to any of them that the shooting of Grant was an accident or that he had meant to pull his Taser instead.

The prosecution called one more BART officer to the stand. Terry Foreman, who came to BART via the Pleasant Hill police force, became good friends with Mehserle. Mehserle asked for Foreman the morning of the shooting when he was taken to BART police headquarters at Lake Merritt.

Foreman said he received a call around 3:30 a.m. from BART stating that Mehserle had been involved in a shooting and had asked for him. An hour later Foreman arrived at the station. “He started crying, I started crying, we hugged,” Foreman said. “I told him I was there for support.”

Foreman would stay with Mehserle at Lake Merritt through the next morning, after word came of Grant’s death, and would drive Mehserle home. He also said he called Mehserle afterwards to check up on him and, days later, drove him to Sacramento to speak with his attorney.

Stein asked Foreman, at any time during their time at Lake Merritt, in the days that followed, or during the drive to Sacramento, did Mehserle say anything to suggest that his shooting of Oscar Grant was an accident or that he meant to draw his Taser instead?

“No,” Foreman replied. Mehserle tried to tell him, “I thought he was going for a gun,” but Foreman would cut him off.

Foreman would call one of his BART commanders asking him to check in on Mehserle. Foreman said Mehserle seemed distraught and not doing well.

“He would say, out of nowhere, ‘I thought he had a gun,’ and start crying.”

Closing arguments in the trial will begin Thursday, July 1, at 8:30 a.m.