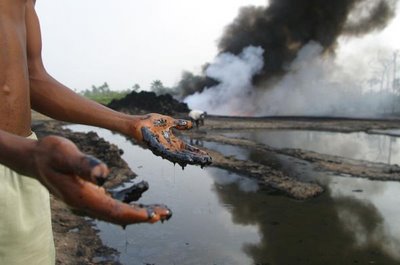 A recent post on the Nigerian blog Nigerian Curiosity is a stark reminder of how Western imperialism continues to interfere in the governance of independent African states. The post reports that Nigeria’s President Goodluck Jonathan has asked the U.S. to help in its fight to end corruption in the country by compiling a list of Nigerians to be banned from entering the U.S.:

“The list stems from the Corruption Proclamation 7750 which allows the U.S. government to suspend and prevent entry of foreigners engaged in or benefiting from corruption. The law was initiated by former President George W. Bush and renewed by current President Obama. Corruption Proclamation 7750 was used to ban former governor of Plateau State, Joshua Dariye, and his entire family from entering the U.S. in 2006.”

As the blogger points out, whilst Nigeria has lost $89 billion over the past 38 years through stolen public funds, by inviting the U.S. to tackle the country’s corruption, Nigeria remains in “servitude mode” and to some extent removes the responsibility of fighting corruption away from the Nigerian government to foreigners.

The recent case of James Ibori, former governor of Delta State who was arrested in Dubai, is another case of leaving foreign governments to deal with Nigeria’s problems. Ibori’s former mistress and personal aide were recently convicted in London for assisting Ibori in laundering billions of Naira stolen from Delta State. He was also declared a “wanted” person by the country’s anti-corruption Economics and Financial Crimes Commission (EFCC) after failing to appear before the commission. The question of how a wanted man with such a high profile was able to leave the country remains unanswered by the commission and the government.

“In what a top security source described as ‘embarrassing,’ a combined team of the Nigerian police and EFCC officials could not arrest Ibori – who for a time was holed up in his country home in Oghara, Delta State. ‘The scandal is that Chief Ibori enjoys support from various top brass of Nigeria’s security agencies,’ said the source, a senior official of the State Security Service (SSS) in Abuja. ‘That’s why he always received information about the plans to arrest him. And that information gave him the edge to mobilize heavily armed thugs who fought to protect him,’ added the source.”

Both these cases illustrate an unwillingness on the part of the government to take seriously the issue of corruption, particularly at the very top level of federal and state government. If the U.S. is able to compile a list of corrupt officials, why can’t the Nigerian government prepare the same list and put a travel ban and indict those concerned?

Many African countries are celebrating between 45 and 50 years of independence in 2010 yet continue to allow foreign governments to intervene in national affairs or act as a proxy police force. The recent case of Malawian couple Steven Monjeza and Tiwonge Chimbalanga, who were sentenced to 14 years’ hard labor for daring to get married, is one such case. Following a continental and international campaign to “free” the couple, they were given a pardon by the Malawian prime minister after he spoke with U.N. Secretary General Ban Ki Moon. Whilst I and many, many others were relieved to hear they are now free, the fact remains that an intervention was made which compromises the Malawian legal process and, worse, does nothing towards changing an unjust law.

Many African countries are celebrating between 45 and 50 years of independence in 2010 yet continue to allow foreign governments to intervene in national affairs or act as a proxy police force.

“Others have already asked what is the meaning of this for the rule of law and independence of the judiciary when people who have been convicted in a court of law, using a valid law, are released because the voices seeking their release have more power and money. They argue after all, that Steven and Tiwonge were convicted in a court for violating the law and if there was dissatisfaction about the trial then Malawian courts should have been petitioned and the matter should have been dealt with in that forum.

“Stepping outside of Malawi, questions are asked on why neo-imperialism is able to triumph in this manner long after the continent has struggled to free itself from the bonds of colonialism and imperialism.”

The relationship between development aid and military aid is another example – a more covert one – of foreign intervention in African affairs where aid monies are given with one hand and transferred back to the West through military spending. Notwithstanding the whole debate around aid as contributing to Africa’s problems.

For example, at the recent G8-G20 meeting in Canada, the promise to increase aid by an extra $25 billion to $50 billion was cut to an $11 billion increase and a $38 billion overall amount. Stephen Lewis, co-director of AIDS-Free World, commented in the U.K. Guardian that increasing spending on maternal and child health at the expense of AIDS as if the latter does not impact on other health issues is yet another betrayal of Africa.

“I see no point in beating around the bush. In the United States, the President’s Emergency Plan For AIDS Relief (PEPFAR) is being flat-lined, for at least the next two years. That this should happen under President Obama seems inconceivable. It not only negates the pledge that the president (and Hillary Clinton) made during the campaign; it even fails to take advantage of the willingness of Congress to support extra funding.

“Worse, the rationale hides behind intellectual sophistry. The argument is that AIDS has had too much money, and additional funds should go to other health imperatives like maternal and child health. No one in his or her right mind would argue with broader financial support for all aspects of global health. But to diminish the dollars that might be available for AIDS, rather than enlarging the financial pie overall is so wrong-headed as to defy rational analysis.”

At the same time as monies for AIDS and the overall aid is being reduced, militarization of the continent continues as military spending through AFRICOM is on the increase.

“In its FY 2011 budget request for security assistance programs for Africa, the Obama administration is asking for $38 million for the Foreign Military Financing program to pay for U.S. arms sales to African countries.

“The administration is also asking for $21 million for the International Military Education and Training Program to bring African military officers to the United States and $24.4 million for Anti-Terrorism Assistance programs in Africa.”

These increases do not include 40 tons of weapons and training for the Transitional Federal Government of Somalia; a security package for Mali of $4.5 million; proposed additional funds for securing the Gulf of Guinea and for Nigeria and the Democratic Republic of Congo (DRC).

“We seek to enhance Nigeria’s role as a U.S. partner on regional security, but we also seek to bolster its ability to combat violent extremism within its borders.”

Also in February 2010, U.S. Special Forces troops began a $30 million, eight-month-long training program for a 1,000-man infantry battalion of the army of the DRC at the U.S.-refurbished base in Kisangani.

We see a trend not just of neo-colonialism but one which moves towards re-colonization. And if we add to this the purchase of huge tracts of African land for agriculture by Middle East countries and China, the people of Africa are being betrayed once again.

Sokari Ekine is a Nigerian social justice activist and blogger. She writes an award winning blog, Black Looks, which she set up over four years ago, writing on a range of topics such as LGBTI rights in Africa, gender issues, human rights, the Niger Delta and land rights. Email her through her blog.