POOR Magazine poverty scholars travel to the U.S. Social Forum in Detroit to discover another world that already exists within all of us

by Tiny aka Lisa Gray-Garcia, daughter of Dee and author of “Criminal of Poverty: Growing Up Homeless in America” 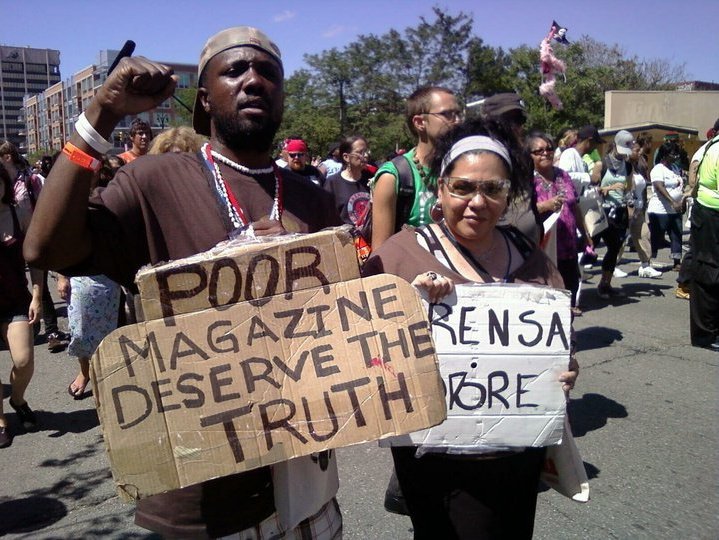 The empty buildings stood, eyes covered in plywood glasses and cast down. Their clapboard, stucco and brick arms, bound by eviction, foreclosure sale and demolition notices.

A small group of poverty and indigenous scholars from POOR Magazine, bleeding internally from our own wounds of eviction, landlessness, budget genocide, racism, po’lice brutality, incarceration and violence, arrived in Detroit on a hot Saturday in June to attend the U.S. Social Forum and Allied Media Conference.

We drove silently through almost-empty streets to arrive at our tiny rented rooms encased in what seemed like a protected, pre-gentrified zone of silence created for the nearby Wayne State University students. We rode past thousands of dreams deferred, homes and jobs had, then lost, businesses and communities built and un-built, peoples removed, displaced, dismantled and there never-more.

“We are realizing a community not defined by Ford, Chevrolet and General Motors, but by the people,” General Baker, a union leader, community revolutionary and long-time Detroit resident said about the history and present of the post-capitalist city known as Detroit. He and the powerful elder revolutionary Grace Lee Boggs addressed hundreds of organizers and poverty skolaz from across Turtle Island and beyond gathered to celebrate a community rooted in people’s struggle, not corporate thrival.

Detroit, called dead and gone by corporate media who define life by the existence of thriving capitalism, corporation-funded employment and rising property values. Detroit, home to the “Detroit rebellion of 1967,” Detroit Summer, Invincible and the Grace Lee Boggs Center. Detroit, land of people resisting as community, not defined by corporations.

Detroit, called dead and gone by corporate media who define life by the existence of thriving capitalism, corporation-funded employment and rising property values. 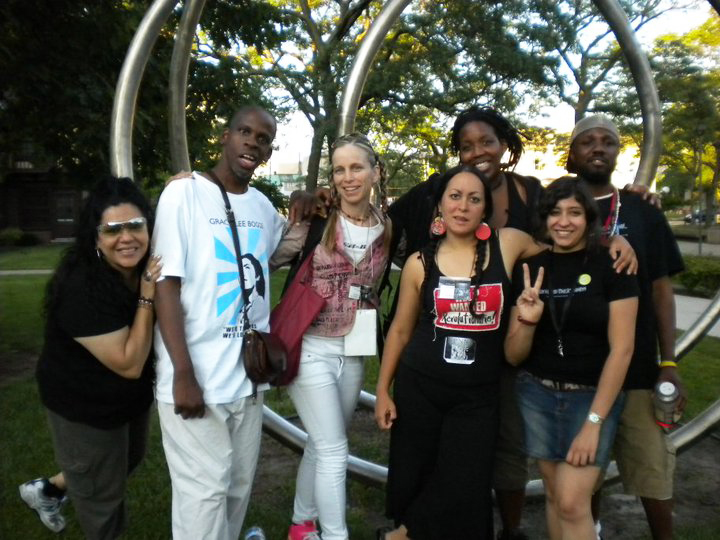 “We provide direct services, counseling and vouchers for hundreds of African-American, Vietnamese and White fisherman whose livelihoods have been destroyed by the BP drilling disaster,” said Tap Bui from MQVN, a New Orleans non-profit launched in the crisis of Hurricane Katrina. POOR’s poverty skolars, media producers and cultural workers came to meet with, teach with and be with other folks struggling with the corporate poison of their homes and economies from BP oil in the Gulf to indigenous peoples struggling with the lies of border fascism and resistance of tribal sovereignty in Arizona, Peru, Canada and Mexico and mamaz fighting the lies of welfare deform in Wisconsin, Detroit, New York and California. We dreamed with other poor people-led revolutionaries from Picture the Homeless, National Welfare Rights Union and El otro campana del barrio in New York and many more who all came to offer workshops and presentations at the U.S. Social Forum.

We also brought our own forms of cultural work, scholarship, art and education on poverty, race, linguistic domination and resistance in several workshops and performances throughout the week.

But in the end, we met with Detroit, a post-capitalist city of humble, conscious peoples re-finding themselves as humans capable of their own created economies, care-giving and people-based labor that actually works to care for all peoples and Pachamama. We spoke with empty streets and closed up stores and abandoned homes and closed parks and open lands and expanding weeds and living museums. 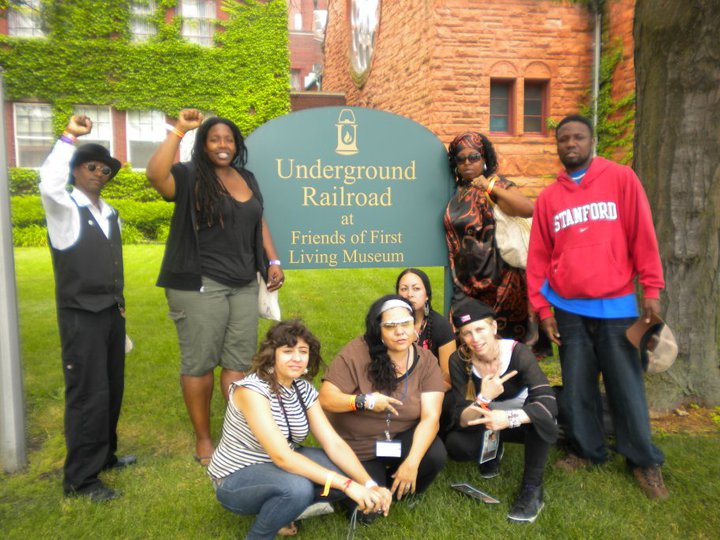 “We provide living tours through slavery by appointment,” I read. The first day we arrived in Detroit we came upon the Underground Railroad Living Museum, which was housed in the First Congregational Church of Detroit. When I first heard about their fascinating “tours,” I was nervous and had no idea what to expect.

How is it right, I pondered, for me to go through this and respect the ancestors and the herstory of oppression and destruction? Was it enough that my melanin-challenged, looking-like-my-colonizer-father self, was the daughter of an African-Boricua-Irish Mama in struggle who had dealt with the post-traumatic slave syndrome and the many fallouts of race and class oppression in Amerikkka? Did this qualify me to go through this life changing experience? I wasn’t sure.

All hues of our POOR Magazine poor people of color contingent arrived the day of our appointment with anticipation and wonder in our hearts. “Wear these.” One of the docent actors in the theatre piece handed each of us a band to wear on our wrists that said simply, “SLAVE.” We clipped it on and the river of metaphors for each of us began. A video on the herstory of slavery and kkkolonization started to play and two by two we were led out of the room into, literally, an underground series of trails and rooms, led by an all-volunteer group of actors who helped us empath with the blood-stained history that is slavery in the U.S.

In the end it was one of the hardest and most beautiful things I have ever been led through and I would recommend it highly. It was not a “tour” through slavery, but rather a piece of very revolutionary people’s history told through popular education theatre by a small group of dedicated volunteers.

We spoke with the beautiful and spirited Elaine Watts, teacher, care-giver and guide, after the tour about the work of the First Congregational Church of Detroit, led by one of the first African Descendent female pastors in Detroit, Lottie Jones-Hood, herself a survivor of substance abuse and recovery who, in addition to the Underground Railroad project, launched the amazing Babes Program, an education and arts project for children of addicted parents.

Taking back land through art

“This art is medicine,” said revolutionary artist and sculptor Tyree Guyton of the Heidelberg Project of Detroit. Everything and everyone we met with in Detroit were powerful and important, but our trip to the Heidelberg Project was nothing less than life-changing. “I am speaking for Him. I am channeling the Creator’s gifts for all of us to see and feel,” Tyree concluded in a conversation with POOR reporters and solidarity board who landed on his street on our second day in town.

One of POOR’s goals with this journey to Detroit was to do research for POOR’s HOMEFULNESS Project, a sweat-equity co-housing model for landless, indigenous families in poverty that includes art, education and micro-business and is a model of self-sustainability. In this search we found ourselves back where POOR had begun.

POOR Magazine featured Tyree’s beautiful re-visioning and re-birth through art of his post-capitalist abandoned neighborhood in our 1996 issue of POOR Magazine, Volume 1, entitled: “HOMEFULNESS.” This magical place contained messages for all of us, pages out of each one of our lives, out of each of POOR Magazine’s literary and visual art and resistance media. 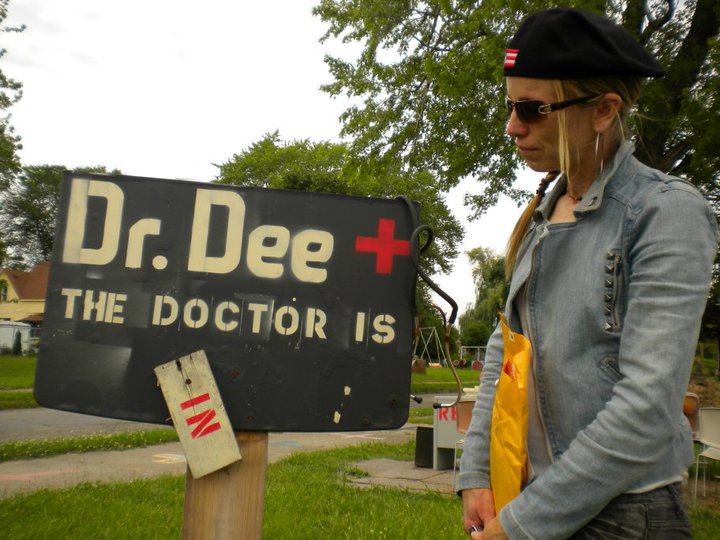 My Mama Dee, who passed on her spirit journey in 2006, hasn’t sent me a sign for a while, and when she does, it often includes her ironic sense of humor that saved both of us through so many years of pain and struggle in our lives of poverty together. She had a pointed message for us at the Heidelberg Project.

In the middle of one of the beautiful mixed media art installations on everything from addiction to child abuse scattered throughout a two block area of abandoned houses was a sign that stated simply “Dr. Dee is In.” I knew my mama was with us on this trip, but I didn’t know ‘til then how much she wanted me to glean from this magical place of displacement, art, public land and community.

Finally, it was the end of our journey, the day we had to return to our temporary locations on Pachamama, the plantation, as my fellow welfareQUEEN Queennandi Xsheba calls them: our underpaid or once-in-while jobs, our budget kkkuts, our Single Room Occupancy hotels, criminalized neighborhoods, po’lice terror, public and private non-profit philanthro-pimped housing, all by-products of the many systems of capitalist oppression that keep us endlessly chasing our own tails and turning our pain and landlessness into products to be case mis-managed, our neighborhoods and bodies endlessly speculated on, deconstructed and dismantled. Our lives centered around what we didn’t have and what they didn’t want to give back to us – scarcity models defined by the man who stole our resources and land and cultures only to funnel us into his education systems ghettos, jobs and prisons.

“You know Tyree built a home for his mama right next door to his on that street in the Heidelberg Project where they still live to this day.” While in Rite-Aid in Detroit, the last skoolin came from a young woman working behind the counter of the local drug store. 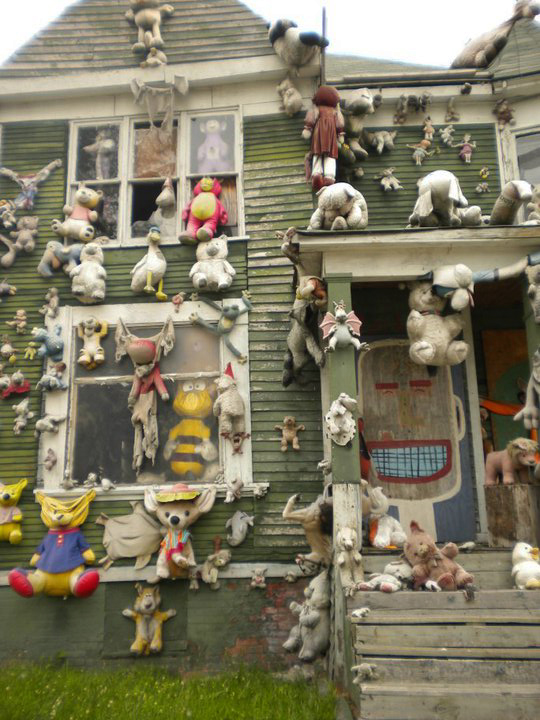 In the U.S. we are all conditioned on the capitalist notion of independence, which demands separation of families from their elders, children from their parents and youth from their cultures. Demands put in place covertly through land use, formal education, non-profit industrial complex and the capitalist driven workforce.

The companion message is the fake dream of a job and a career, which most of us are conditioned to believe should be our guide and shape our lives, yet these aren’t jobs that make our children eat better, learn to read or fish, farm or make art, our families love each other, our elders or our bodies healthier or Pachamama cleaner or happier. Our work as mamaz and fathers and grandfathers and grandmothers isn’t honored or considered. Our abilities to grow our own food, build our own houses, or comfort our folks, practice our traditions, honor our ancestors, take care of our elders – these aren’t considered “legitimate” forms of labor or real forms of work.

One of the key aspects of POOR Magazine’s poor people-led, indigenous people-led message is our deconstruction of the roots of capitalism and our constant real time practice of a different world – a world that practices inter-generational education, arts love and inter-dependence, love like the Malawi people, who believe if I have met you I am responsible for you, that if one person accumulates wealth and keeps it just for themselves something is wrong with that person or, like almost all indigenous peoples believe and practice, no one lives alone and isolation and alone-ness are not barometers for sanity, like they are in this twisted society.

Tyree practiced these acts of love and care-giving with his community, neighborhood and family. In Detroit. In a neighborhood purported to be abandoned, destroyed and lost.

Going back … back back to Cali Cali …

We drove in silence to the airport. Again we passed the empty homes, silent neighborhoods and shuttered businesses and yet this time I saw something else. The empty buildings looked different. They seemed to sway and move in tandem with the wind, their plywood glasses covering their resting eyes while they thought and considered and dreamed. Their wood and stucco skin was massaged by the weed fingers of their mother, Pachamama, mother earth, her leafy arms whispering dreams of liberation from corporations, real estate speculation and endless gentrification. Her rain bathing over their dusty crevasses with the water of real change and land reclamation not rooted in capitalist ownership.

Tiny – or Lisa Gray-Garcia – is the consummate organizer and co-founder with her mother of POOR Magazine and its many offspring and author of “Criminal of Poverty: Growing Up Homeless in America,” published by City Lights. She can be reached at deeandtiny@poormagazine.org.