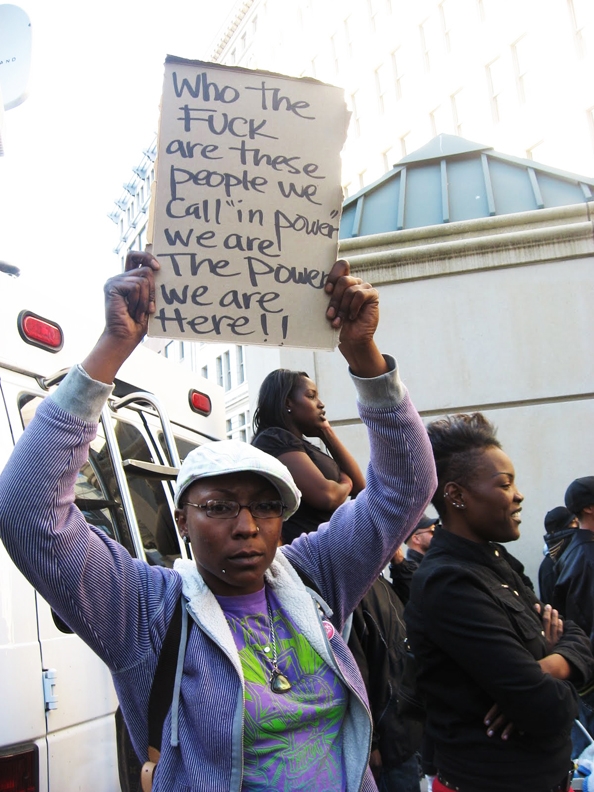 It looked like what Louisiana must have looked like when the category 5 hurricane was confirmed and folks packed their stuff in their cars and got on the road headed away from New Orleans.

The only folks who stayed behind were those who were shut in, poor, uninformed or stubborn, but the issue is more complex than that. This before the levees gave and millions died, disappeared, dispersed … gone.

When I came home from New Orleans the week after Grant was killed, I thought about the New Orleans shooting that same night that took the life of another young father. Adolph Grimes III was shot 14 times by an undercover New Orleans police officer who did not identify himself. To date, this murder is unresolved, unlike the California movement around Oscar Grant’s case.

Just a little digression or should I say libation to another fallen soldier.

I was down at Frank Ogawa Plaza to pay a traffic ticket early Thursday afternoon when the first of a few text messages about the Grant trial verdict and phone calls about a rally at 6 p.m. came in. As I stood in the lobby to pay a couple of citations, the building began shutting down, employees exiting.

“The verdict is going to be announced at 4 p.m.,” a security guard announced as she waited on the phone for her other officers to check in for the final building sweep. I hoped my ticket wasn’t going up by the time the scare subsided. The natives were getting restless, so those who could ran home and locked their doors.

Something out of Hollywood as in “Tarzan” maybe? But this was Oakland, California, where Black folks are migrating to Antioch and Bay Point and Fairfield, even Sacramento.

A friend of mine told me at her job the plan was to lock employees in if the verdict occurred while they were still there. No one would be able to leave or enter. I was like wow! 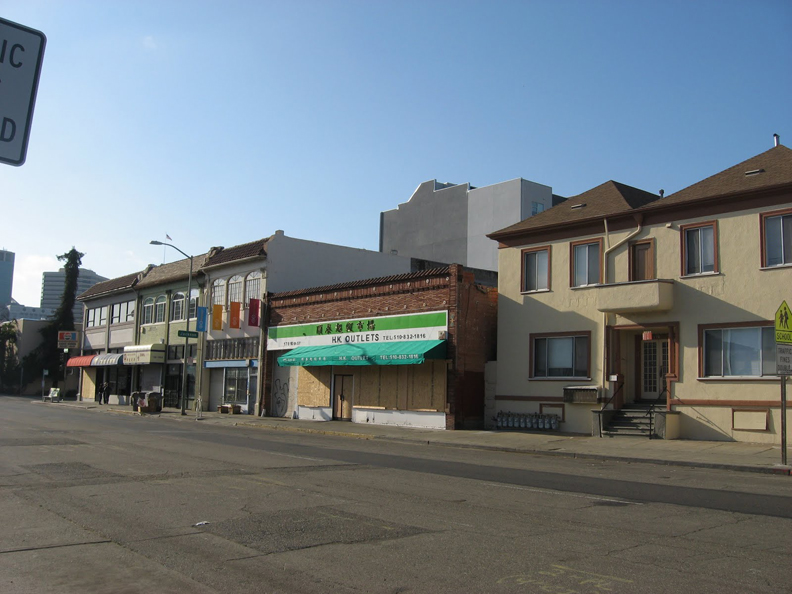 On BART – yes, I know, BART – it isn’t the transportation system; it’s the policy that governs its employees – police in that pool, as well. That is the problem.

On BART, some kids from a Berkeley summer program get on the train and while they are riding to a station where they can find space – they get on at a downtown station and ride back to 16th Street – a passenger updates chaperons on the Grant case and encourages them to get the kids back to their site as soon as possible.

It was like the bearer of this news was holding a ticking bomb about to go off between 4 and 4:30 p.m.

As I looked over the freeway lanes at cars pouring onto the interstates – the operative coda: get out of Dodge – the lanes were packed. It looked like 6 p.m. rather than 3:30 p.m. In San Francisco on the streets in the Mission District, the bustle wasn’t as noticeable. Oakland – think “bad boy” – was enough of an incentive for everyone elsewhere in the Bay Area to act right.

When I returned to Oakland on BART a couple of hours later, at 5:30 p.m., from my French lesson, the mood had shifted from employees running scared to vacated streets and boarded windows as far away as Ninth and Oak Streets. This mood was helped along by hundreds of uniformed police from the San Francisco Bay Area and beyond. 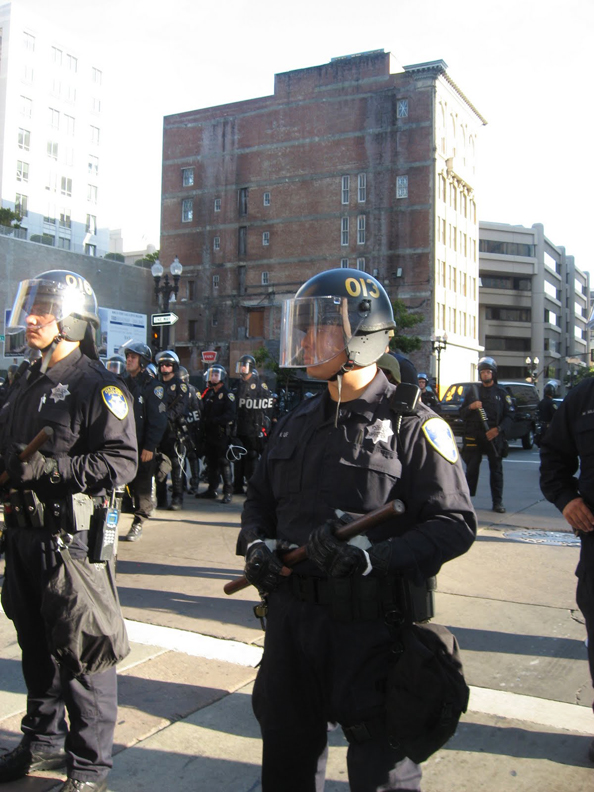 I’d never seen so many police before. A person I met at the speak-out said the call had gone out to law enforcement throughout Northern California, with Oakland police acting as escorts to these out of town armed guests. Talk about East Bay hospitality?! It certainly wasn’t extended to those citizens who failed to disperse after 8 p.m. when the permit expired for the speak-out.

A friend of mine, Tiyesha, was the stage manager at 14th and Broadway where, at 6 p.m., community was invited to share what was on their hearts. No one was censored and all views were respected, even the young man who said, “All police are not bad.”

The police moved in afterwards, I heard, to disperse the crowd, which it said was assembled illegally. I think it was more to keep the businesses safe, rather than the people still milling around.

Since when is it illegal for folks to get together when the U.S. Constitution guarantees our right to assemble peacefully? This permit business is new. When the Constitution was drafted, where does it say one has to have a permit? Permits cost money and often when one is emotional and caught up in the moment, the last thing on an American’s mind is: Oh my, I need to go get a permit before I can stand on this corner.

I always feel weird when I see how people have to let the government know that they want to assemble – take out permits, pay for stages, security. There is never an element of surprise, which means the government can make counter plans, which is what happened Thursday afternoon. The people were sitting ducks, outnumbered and outgunned – trapped on all sides, including air.

However, that didn’t make some folks shut up and sit down. Many people I saw earlier were arrested and are still locked up, 78 in total, like Jumoke Hodge and Walter Riley.

Where would this country be, how would those righteous laws and civil rights written into the Constitution and Bill of Rights have gotten there had citizens not challenged those carrying weapons?

Yet, then and now, a law is nothing but empty words if not actualized. This is what the movement is all about, claiming the mic and changing the channel. 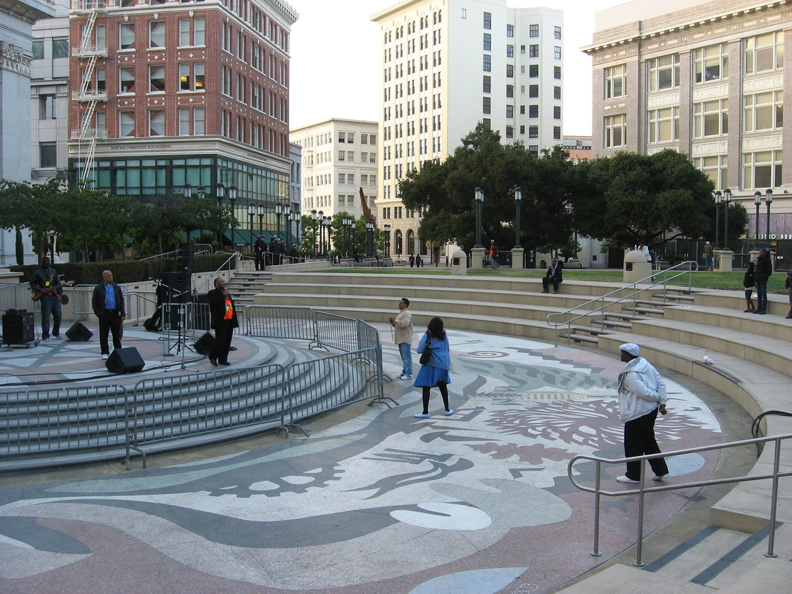 Set up like an open mic event, people put their names on a list to speak for 2-3 minutes when their turn came up. Oscar Grant’s relatives in the Bay and childhood friends called for love and respect for life and each other, as they named the enemy: this corrupt judicial system that allows killers to go free. Well-known activists like Wilson Riles Jr. spoke along with others like a young woman who said her father and brother were killed in the streets before she was 17, but she didn’t let her grief keep her from completing high school and moving on with her life as she sought justice for the murder of her loved ones.

The circle was an opportunity to heal. In African traditional healing, the health of an individual is tied to the well-being of community. Everyone participates in the healing ceremony. Low-tech, the stage, a soapbox on a corner, people surrounded the speakers, stood shoulder to shoulder … breathing in a shared air. No one needed to be alone on a day like today. I wonder what the people were doing who sat fearful behind barricaded doors and windows in front of television sets or radios … as the armed militia stood in formation ready to attack.

There was a sharpshooter at the top of one of the higher buildings overlooking the assembly (look for the dot in the photo) and all along Broadway from 14th down to about Fifth Street police were staged as a red jeep drove between those assembled dropping off people and gear, perhaps checking in. 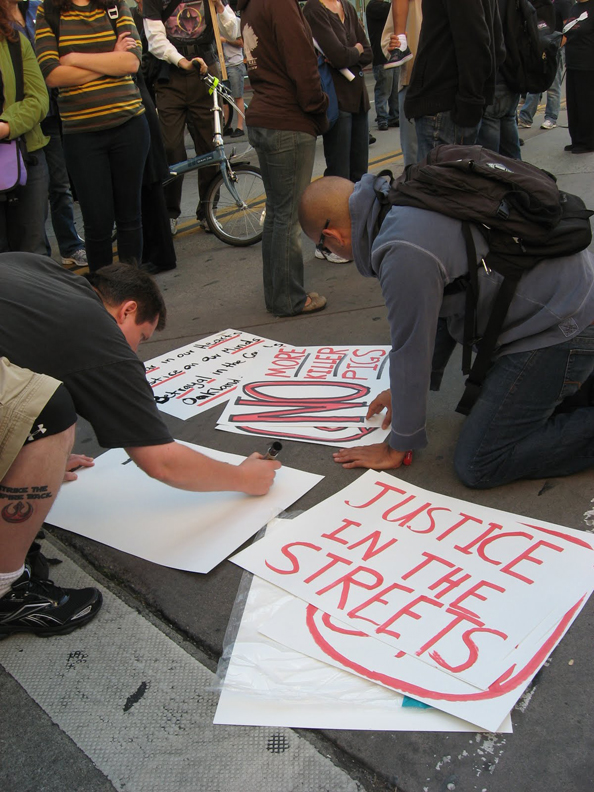 I showed my San Francisco Bay View press pass to pass between 12th and Broadway, as the police line wasn’t letting pedestrians through in cars or on foot. The BART entrances were taped off. I asked my council person, Desley Brooks, what the plan was and she said the community organizers had a permit from 6 to 8 p.m. Later on, as I left with my friend Sidney Coulter (Wo’se House of Amen Ra), his daughter and Sister Venus Noble, whose two sons were shot, one fatally, as they were headed to a protest against the execution of Stanley Tookie Williams in 2005 – I noticed another rally in front of City Hall.

Just a handful of people were there. Donald Lacy was the emcee and as we passed by, he invited a pastor up to open the program with prayer. It didn’t make sense that Donald was at 1 Frank Ogawa Plaza ministering to a handful of people when he could have been on the corner of 14th and Broadway with the folks sharing his Lovelife story. He lost both a daughter and son to violence and like the child who spoke earlier at the Oakland Community Dare, he turned this tragedy into his life’s work.

The Shona tradition calls such healing circles “Dare,” while in KiKongo they are called “Mbongi.” Both have to do with dialogue, dreams and healing, where the elders and the youth – the community – come together and, as people pass the talking stick and share their ideas and feelings, the healing begins.

Health is not isolated, rather communal.

With all the guns and military apparatus surrounding us this afternoon, 14th and Broadway was probably the safest place one could have been. The speak-out, the rally, opened a space, provided an opportunity … a moment … a space … a peace … we need to replicate as the movement for justice and righteousness continues and safe houses or the Dare, as a concept, is something we need to secure as a part of the overall strategy as we move forward. 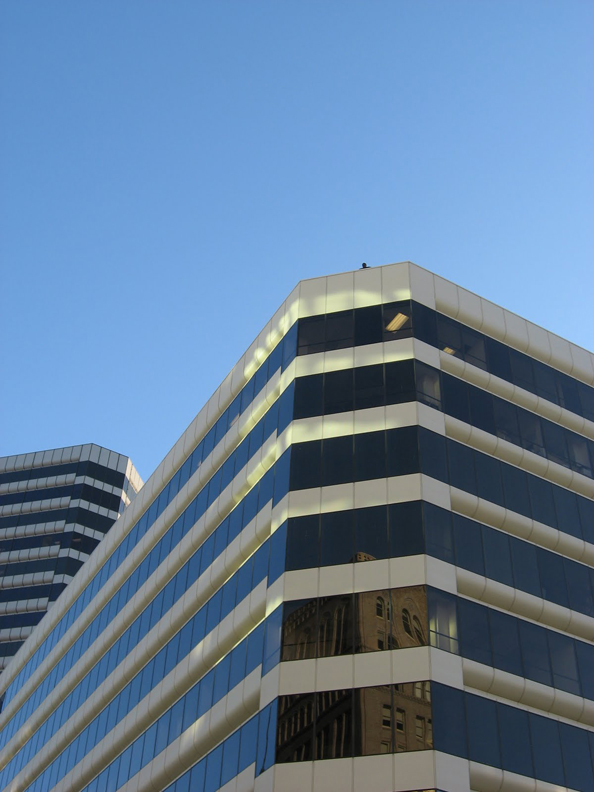 As Congresswoman Barbara Lee said, echoed by Mayor Dellums a little later, the Mehserle verdict is just a first step. There are other appeals and other investigations that will be explored as the verdict is evaluated and found wanting. How can a murderer receive an involuntary manslaughter sentence, even with a weapon enhancement?

Revolution Books stated that if such a verdict holds it will signal to all arms bearing employees of the state – police – that they can kill and get away with it. And it will signal to citizens that when people we love are gunned down or killed, a “slap on the wrist is the best we can expect” (revolutionbooks.org).

As Grant’s mother said after the verdict, “First I thank God and I trust in him, that he is the final judge. The system has let us down, but God will never ever let us down. … The race is not given to the swift nor to the strong, but to the one who endures to the end. …

“We could not even get six hours of deliberation. And we have a new juror who came in who has not even probably reviewed the evidence with the other jurors. But the jury had already had their minds tainted.”

She then reflected on Dr. King’s statement regarding Black people one day being judged not by “the color of our skin but by the content of our character.” 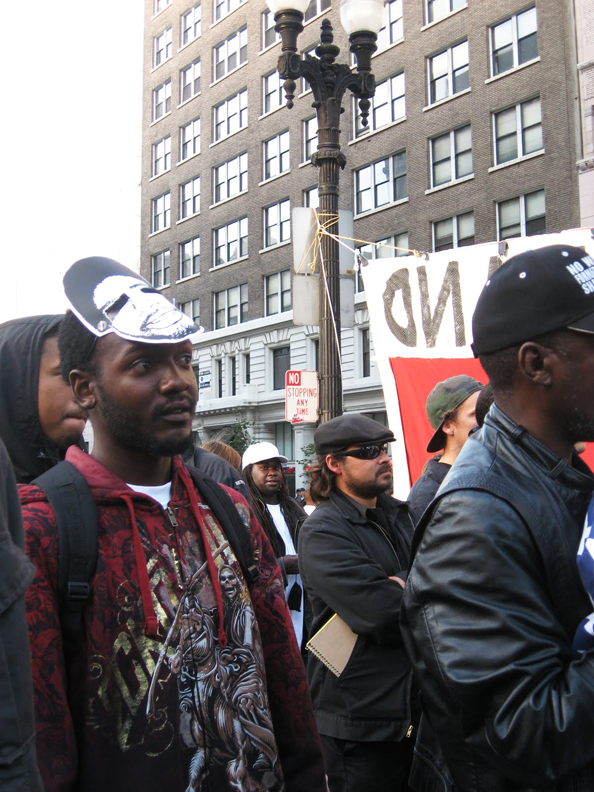 On Wanda’s Picks Radio, Friday, July 9, 2010, we had a spirited and enlightening talk about Oscar Grant, the judicial system, his courageous mother and family and the support for a revolutionary movement for justice kicked off by the events of Jan. 1, 2009. Visit www.blogtalkradio.com/wandas-picks. 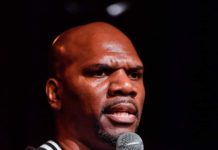