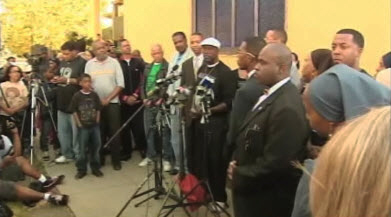 At a press conference in Oakland called by the family of Oscar Grant on Saturday, they told reporters that the letter of apology from Mehserle should have come much sooner and should have been directed to them personally. The letter and raw tape of the press conference from ABC7 News is below. Grant’s uncle, Cephus Johnson, said that he was not buying Mehserle’s apology and, he said, neither was the public.

Now that the gag order in the case has been lifted, the attorney for former BART police officer Johannes Mehserle is speaking out. KGO-TV asked Michael Rains on Sunday his reaction to Oscar Grant’s family denouncing Mehserle’s letter of apology.

Rains told KGO-TV on Sunday, “You know what, I don’t think that when the family remains that hostile and that nasty and mean-spirited that Mr. Mehserle should be out there offering olive branches because they will not be received.”

Meanwhile, Mehserle had been scheduled to be sentenced on Aug. 6 but that will likely be delayed. Michael Rains, the attorney for the former BART officer, asked for a delay in sentencing to give him more time to prepare. The judge in the case, Los Angeles County Superior Court Judge Robert Perry, told Rains that he wanted the attorney to argue his post-trial motions at sentencing and Rains said he needed more time.

Rains is asking that sentencing be delayed about another month. Rains told the San Francisco Chronicle that Perry seemed amenable to a delay but that he would need to clear it with prosecutor David Stein first. Rains says he will call Stein on Monday.

Rains says the jury was “confused” and in a hurry to reach a verdict and “get out of the courthouse.”

He said the involuntary manslaughter charge and the gun enhancement charge which the jury convicted Mehserle on were mutually exclusive because involuntary means without the intention to fire a gun. Rains will ask the judge at sentencing to set aside the conviction and order a new trial.

Grant’s family is seeking a federal prosecution based on civil rights violations. Rains called that “highly unlikely or altogether impossible.”

Ed Walsh, SF Headlines Examiner, has worked as a journalist in the San Francisco Bay Area since 1985. He’s worked in television, radio, print and the Internet. His email address is edwalsh94105@yahoo.com. This story first appeared on Examiner.com San Francisco.

Editor’s note: Thandisizwe Chimurenga, one of the journalists who covered the Mehserle trial for the Bay View and other papers, wrote on Facebook, “According to the court’s Public Information Office, no new date has been chosen for Mehserle’s sentencing but it has been pushed back to October, possibly even November.” In response, Wanda Johnson, mother of Oscar Grant, wrote: “I figured they would try to push it back as far as they can in order to try to say time served. The apology letter I believe was given to the jury to help them determine the verdict. The whole system is unjust.”