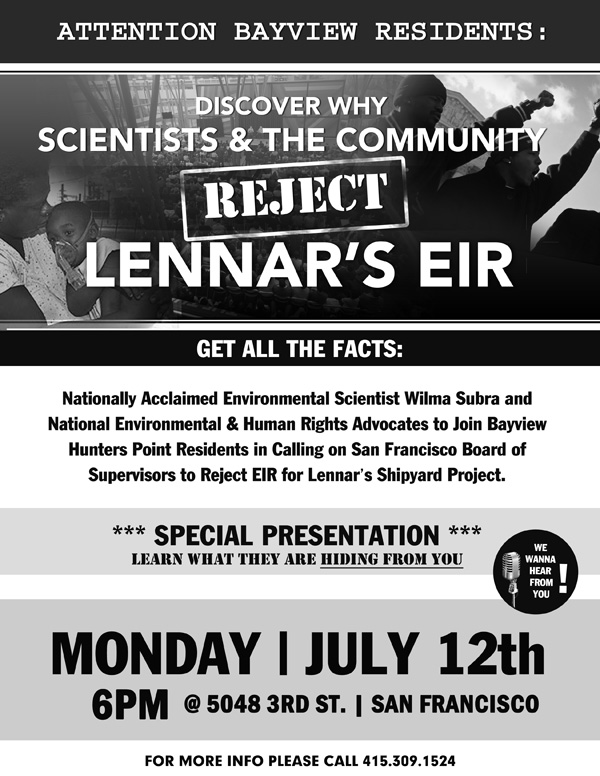 San Francisco – Nationally acclaimed environmental scientist Wilma Subra and national environmental human rights lawyer will join Bayview Hunters Point residents at a press conference Monday, July 12, at noon on the front steps of San Francisco City Hall and that evening at the Center for Self-Improvement, 5048 Third St. in Hunters Point. Speakers will call on the San Francisco Board of Supervisors to reject the flawed Environmental Impact Report for Lennar’s proposed massive condominium and stadium complex at the contaminated Hunters Point Shipyard.

CNN has called Wilma Subra another Erin Brockovich, and the Guardian of London has called her an “activist grandmother” and “[BP Chief Executive Officer] Tony Hayward’s worst nightmare.” Wilma Subra is a chemist who has been working for the past 30 years to defend local communities. Subra received a MacArthur Genius grant for her work in 1999 and is now one of the leading experts on the British Petroleum oil spill crisis. On June 2, Subra was featured on CNN’s Special Report “Toxic America” and the national Pacifica Radio program “Democracy Now!” which is aired on 800 radio and TV stations nationwide.

According to nationally acclaimed scientist Wilma Subra, “The EIR failed to evaluate and assess the cumulative impacts of exposure to children, adults and the environment as a result of exposure to all of the chemicals present at the site.”

Monique Harden, co-director and attorney for Advocates for Environmental Human Rights (AEHR) of Louisiana, will join Subra at the press conference. AEHR recently brought a human rights case on behalf of Mossville, Louisiana, residents seeking to remedy the failure of our government to protect communities from toxic pollution and environmental hazards.

Advocates for Environmental Human Rights are examining similar human rights violations affecting the protection of health for families in Bayview Hunters Point if the City moves forward with development without successfully mediating the health impacts on the surrounding community.

“The EIR failed to evaluate and assess the cumulative impacts of exposure to children, adults and the environment as a result of exposure to all of the chemicals present at the site.” – nationally acclaimed scientist Wilma Subra

“If the City of San Francisco respected the human rights of Bayview Hunters Point residents, they wouldn’t be in the situation that they are in now!” said Harden.

“In the struggle for environmental justice, it is appalling that we are not able to depend on the EPA of Region 9 who is mandated to protect the health and wellbeing of the community. We are forced to call on outside help to advocate for our right to clean air and health, as our own City watches people suffer,” said Vivien Donahue, who lives just a few yards from the Shipyard. “San Francisco is not a Green City for the environment; it is green for the money they want to give to these developers.”

Hundreds of Bayview residents and allies will mobilize on Tuesday, July 13, at 3 p.m. to a hearing to ask the Board of Supervisors to reject the Environmental Impact Report (EIR) that may allow for an early transfer of the shipyard to the City from the Navy and permit the developer Lennar to begin construction of a mega condominium complex and to “cover” radioactive contamination rather than fully clean the shipyard.

“We are opposed to the EIR. The shipyard needs to be cleaned up, not covered up. It is too toxic!” said long time African American Bayview resident Esselene Stancil, 78.

POWER and prominent environmental justice experts such as scientist Wilma Subra, the Sierra Club, Green Action and California for Renewable Energy (CARE) have voiced aggressive opposition to developing before a full cleanup of the Shipyard. POWER, CARE, the Sierra Club and Arc Ecology have all recently filed separate appeals to the joint Planning and Redevelopment Commission’s approval of the EIR.

“We are opposed to the EIR. The shipyard needs to be cleaned up, not covered up. It is too toxic!” – Bayview resident Esselene Stancil, 78

Nationally acclaimed scientist Wilma Subra has served on several national committees that oversee the issues related to the Hunters Point Shipyard and Candlestick Point Development Plan, including the National Commission on Superfund from 1993 to 1995 and the EPA National Environmental Justice Advisory Council (NEJAC) Cumulative Risks/Impacts Work Group, of which she was vice chair, from 2003 to 2005.

Subra will also be attending the July 13 hearing to recommend rejection of the EIR.

Dozens of local and national progressive organizations, churches and community groups have endorsed a call for the supervisors to reject Lennar’s EIR and support a full cleanup of the Shipyard. Progressives also support spending more time investigating better alternative development plans that can create larger amounts of affordable housing, long-term revenue for the city, good jobs and contracts for community workers and builders, environmental security and safeguards to prevent further displacement of African American and other communities of color.

In addition to progressive organizations, urban planning experts are warning city officials that the current plan for development will increase the Black flight and displacement crisis in San Francisco. Currently San Francisco has the highest rates of African American displacement in the country outside of post-Katrina New Orleans.

“I think it (the Lennar Plan) adds up to gentrification, which is disruptive to the surrounding community, families and the last bastion of the Black community in San Francisco,” said Chester Hartman, who has authored over 18 books on race and urban planning, including the acclaimed “City For Sale: The Transformation of San Francisco.” Hartman and many other nationally renowned planners are submitting letters to the supervisors warning against the displacement that could result from the adoption Lennar’s mega development plan.

“San Francisco is not a Green City for the environment; it is green for the money they want to give to these developers.” – Hunters Point resident Vivien Donahue

“Corporations across the world are pushing for deregulation and moving forward at whatever costs to the planet and to communities. Let’s just dig, let’s just cover, let’s drill to turn a profit. We see the consequences of flawed policies all over the planet when levees break, when oil wells burst, when earthquakes hit – it’s a global crisis,” said Bayview resident Nyese Joshua. “San Francisco needs to hold its integrity as a leader of environmental justice, and it is incumbent on the supervisors to have the courage to stand on that principle and not accept this irresponsible EIR.”

‘Shipyard to be transferred to city not entirely free of pollutants’

On May 11 in the San Francisco Examiner under the above headline, John Upton warned of the consequences if the Supervisors give Lennar the green light:

“The shuttered Hunters Point Naval Shipyard is not expected to be fully cleaned up before its ownership is transferred to San Francisco for redevelopment.

“The shipyard, which is on the U.S. EPA’s Superfund list of the nation’s most polluted sites, is contaminated with heavy metals, radioactive waste and other pollution left behind by decades of Navy operations.

“The Navy is performing a variety of cleanup activities at the long-disused site, including the excavation and removal of dangerously polluted dirt and fill.

“The City, however, is pursuing an ‘early transfer’ transaction, which would see it take over the land from the Navy before it has been fully cleaned, mayoral development adviser Michael Cohen said during a Board of Supervisors Land Use and Economic Development Committee hearing Monday.

“The City plans to give the land to private developers led by Lennar Corp. for development and minor cleanup-related purposes. Lennar would lay infrastructure and then return streets and other public amenities to San Francisco.

“Clean-up work as most people understand it is not planned to be undertaken by the development companies. Instead, they plan to pour dirt or lay streets or concrete building foundations over polluted land.

This is a crucial moment in our four year struggle for a full cleanup of the Hunters Point Shipyard and for development that won’t lead to even more displacement of African American and other communities of color in the Bayview neighborhood. On Tuesday, July 13, at 3 p.m., the San Francisco Board of Supervisors will be voting to accept or reject the Environmental Impact Report and other planning documents for development on the Shipyard Superfund site.

“San Francisco needs to hold its integrity as a leader of environmental justice, and it is incumbent on the supervisors to have the courage to stand on that principle and not accept this irresponsible EIR.” – Bayview resident Nyese Joshua

The progressive supervisors understand the reasons this project is bad for San Francisco and bad for Bayview but they are under intense pressure from the big money developer Lennar and labor organizations who are set on the short sited issue of jobs and not the big issue of environmental safety and displacement of the Bayview community. We have to remind them why it so important that they vote their conscience and reject the EIR.

Take a minute to call your supervisor today and tell her or him to protect the community and the environment and not Lennar’s bottom line. See the script and numbers for the supervisors below.

Come to the Board of Supervisors hearing on TUESDAY, JULY 13. We’ll be meeting at 3 p.m. at City Hall in the second floor Supervisors’ Chamber. We’re asking anyone who supports this movement to speak against the EIR at public comment. We will have talking points to help you with your testimony.

Sample script for calling the supervisors: “I’m calling today to urge the supervisor to reject the Hunters Point Shipyard EIR. The EIR is premature and we can’t safely pass it without the EIS and full plans from the Navy for how they will clean up the Superfund site. I am also concerned that the development plan for the Shipyard will, in the long term, be detrimental to the Bayview community and cause increased displacement of the community. San Francisco must lead the way as a green city and should not put the wishes of a developer over the health and wellbeing of communities of color.”

Phone numbers for Board of Supervisors 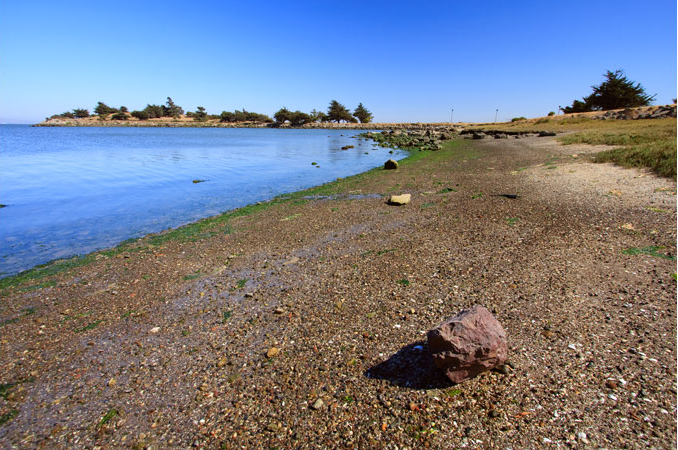 “Tomorrow, Tuesday, July 13, the San Francisco Board of Supervisors will cast one of the most important environmental votes in City history. At stake is a vital wildlife habitat and the public health and safety of all San Franciscans, especially those in the City’s most ecologically and economically vulnerable community, Bayview Hunters Point.

“Recently, Miami-based megadeveloper Lennar was fined over $500,000 for repeatedly violating air safety regulations in a huge condo development project in the Bayview. Yet even though Lennar was found liable for stirring up deadly toxic chemicals and asbestos, it is on the verge of being allowed to double its operations! Lennar’s new project would replace large areas of San Francisco’s Candlestick Point State Park wildlife habitat with high-end waterfront condos and a yacht harbor.

“In part of the new project area, there is also a dangerous U.S. Navy chemical and radioactive dump, designated as a hazardous Superfund site by the U.S. EPA.

“The approval will allow Lennar to continue its dangerous, shoddy construction and will also permit the Navy dump to be covered with an unsafe cap rather than requiring all toxic and radioactive materials to be removed from the site. Once the cap is in place, homes, businesses and parkland will be built on top of it.

“What you can do: Rejecting the project will depend on the crucial swing vote of Board of Supervisors President David Chiu. Call Supervisor Chiu at (415) 554-7450 with the following comment: ‘Please reject the Candlestick-Hunters Point Environmental Impact Report. It is unacceptably dangerous to the Bayview and the entire City and threatens destruction of vital wildlife habitat.’

“If you call during the evening, or get a recording, just leave your comment as voice mail.

Information is also available by phone, at (415) 309-1524. Most of this story was written by Jaron Browne of POWER, jb@unite-to-fight.org, and Jose Luis Pavon of HOMEY.