If you are arrested, call the National Lawyers Guild Demonstrations Defense Hotline: (415) 285-1011

by Oakland General Assembly for Justice for Oscar Grant 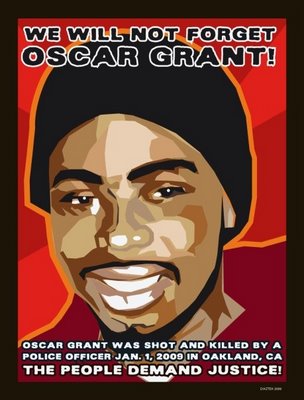 The verdict for Officer Mesherle is INVOLUNTARY MANSLAUGHTER. As the verdict approached, it came to our attention that numerous “leaders” and “organizations” in Oakland are speaking in the name of Oscar Grant with their own agenda and there has been conscious political sabotage on the Oakland Assembly’s organizing efforts. Due to this, we would like to voice such concerns publicly.

Before the trial even began, the Oakland Assembly called for a community gathering on the day of the verdict, yet now city leaders have decided to hold their own verdict-related event on the same day at the same location starting one hour earlier. Their speakers will be city-approved only and will be given specific city-approved talking points, more focused on the possibility of property damage than justice for Oscar Grant or other victims of police violence.

City Council member Jean Quan has stated that she speaks for Oscar Grant’s family, even though she has not sought approval from Oscar’s family to do so nor has she been seen doing any credible act to pursue justice concerning Oscar Grant’s murder. As our committee prepares to hold a two-hour rally in the intersection of 14th and Broadway on the day of the verdict, City Council member Desley Brooks has been taking an active lead in organizing a city-sponsored rally in front of City Hall as a political diversion against our rally.

City-linked nonprofit Urban Promise Movement released a talking point sheet geared toward “inoculating” Oakland youth against “outside agitators” as if Oakland’s youth of color do not possess their own political agency and thought. Youth Uprising released a public service announcement equating the murder of Oscar Grant with property destruction. Joe Haraburda, president and CEO of Oakland Metropolitan Chamber of Commerce, started an “Oscar Grant Memorial Fund” claiming to benefit youth in Oakland and “stand for justice” yet has not even contacted Oscar’s family about the fund.

Such efforts are political tricks for their own positive publicity. We have not found that such efforts as the Chamber of Commerce’s accumulation of money for Oscar Grant has helped the cause and the pursuit for justice concerning Oscar Grant’s murder in any way. The Oakland Metropolitan Chamber of Commerce works with Mayor Dellums, who has also been dragging his feet throughout the whole process of this case.

Along with Dellums’ passivity concerning Oscar Grant’s murder, Oakland Police Department, along with the Alameda County Sheriff’s Department, has spent over $700,000 on Long Range Acoustic Device (LRAD), a high-decibel acoustic device intended to keep the Oakland population in control, purchasing this weapon at a time Oakland is currently laying off school teachers.

The Oakland General Assembly for Justice for Oscar Grant seeks to organize for the justice in Oscar Grant’s murder through a democratic process that connects with the greater community beyond well-connected and often self-appointed “leaders.” We are not proponents of violence; we are proponents of justice. We have found that such justice is not created by the government’s own mechanisms; only through the people’s will and their political efforts can we see justice materialize.

The Oakland General Assembly for Justice for Oscar Grant is a grassroots coalition of concerned citizens working with statewide partners to stop the epidemic of police abuse. For more information, see www.oaklandforjustice.org.