Update: Scroll down for a new video and message from Tony Coleman – It’s now the Peace from Police Ride! 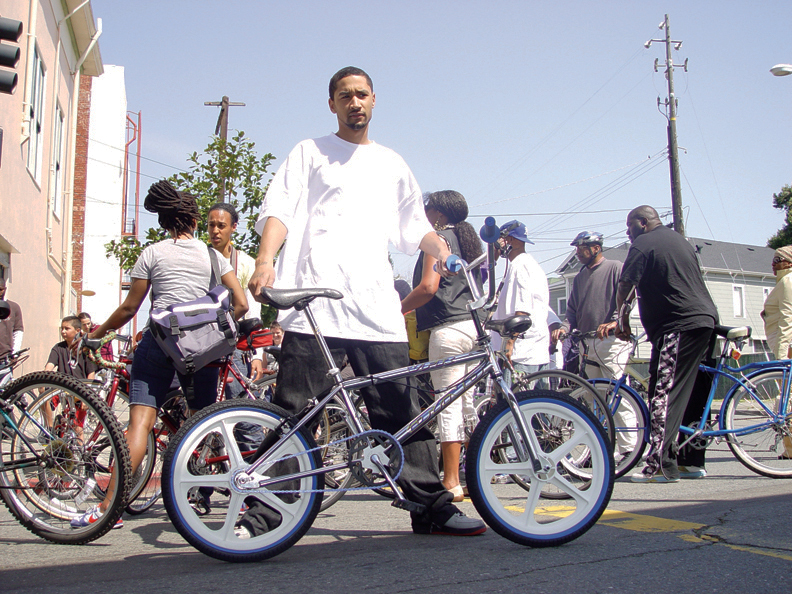 Bikes 4 Life is on the cutting edge of the earth conscious movement that has to take place in this country if the human race is to survive. From the naked eye, it is a used bike shop that repairs and sells used bikes. In reality, it is one of the community anchors in West Oakland where people go to socialize and congregate and discuss community issues, including bikes.

The founder of One Fam and Bikes 4 Life is a veteran non-profit organizer operating in the Lower Bottoms of West Oakland, with over a decade of experience under his belt. From the depths of the hellish conditions of street life, to a stint in prison, to being seen as expendable by one of the white left’s Black mascots after his face and work were used as a front for social and political opportunists to advance, Tony Coleman has seen the intestines of the beast. Let’s see what he has to say …

M.O.I. JR: Can you tell us what made you start Bikes 4 Life? Where is it located?

Tony Coleman: I started Bikes 4 Life as a project of One Fam in West Oakland, because my kids and I have lived here for a decade and I feel it’s important for local residents to own and run businesses right where we live, to build our economy and strengthen the community. What inspired me to open a bicycle shop was the success One Fam and I had organizing annual bike peace rides from Lake Merritt to West Oakland’s DeFremery Park (Lil’ Bobby Hutton Park). 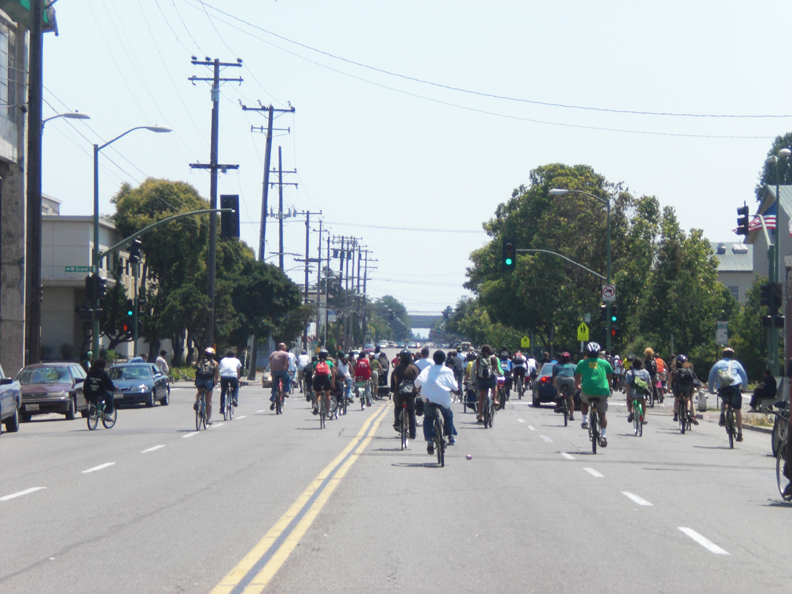 Seeing over 300 bike riders – mostly youth of color but very diverse – as a community organizer, I thought to myself that opening a bike shop will not only be good for business but will help to build and unite the community. One Fam had already been planning to establish a social enterprise in order to become less dependent on grants and more self-sustainable in our operations. So the timing could not have been better.

M.O.I. JR: What has the impact of Bikes 4 Life been in the West Oakland community?

Tony Coleman: The Bikes 4 Life Bicycle Shop has had a tremendous impact. The full spectrum enjoys the space from your typical artist “Hipsters,” mostly white, that enjoy road bikes and fixies and stop in to utilize the free bike kitchen to work on their bikes, to turf hustlers that come and have their GT bmx bikes worked on. Chrome 24-inch GTs have become so popular in West Oakland that Bikes 4 Life inspired some regulars to start a GT bike club and they’re planning to be in full force at the annual peace ride. 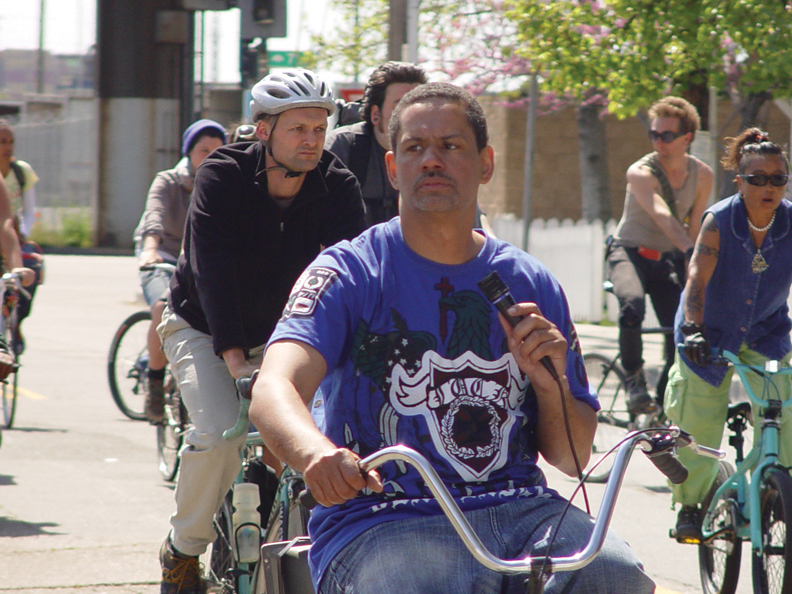 The original GTs are no longer made by GT, making them hard to find, thus adding to the hype and attraction. This new phenomenon is largely due to Bikes 4 Life being in the neighborhood, as in the “Field of Dreams,” “You build it; they will come.” But it also matters who builds it.

M.O.I. JR: What kind of activities is Bikes 4 Life involved in?

Tony Coleman: Bikes 4 Life organized a neighborhood bike ride that was also a historic tour of the neighborhood, complete with historians and guides informing the riders of the rich history, including as the birthplace of the Black Panthers and the Pullman Porters and the 100-year history of DeFremery Park (Lil Bobby Hutton Park). A member of the historical society of DeFremery Park gave a presentation. The bike ride attracted over 75 local diverse residents, many of whom might have never met if not for the ride.

Another activity that B4L is planning is the bicycle repair skills competitions. The goal of the competitions is to highlight bicycle mechanic skills. When I was a kid, we used to all get together and fix on bikes without any formal training, just by trial and error – which is good, but now bikes are expensive and we could’ve benefited from having the proper tools and information that we have now, with all the bikes we ruined with vice-grips as our all-in-one tool. When you have the right tools and know how to use them, it’s actually fun and rewarding. B4L has become that resource that organizes fun bike activities and competitions, striving to inspire the mechanic in us all.

M.O.I. JR: Can you tell us about the Bikes 4 Life event in July coming up?

Tony Coleman: We’re super excited about our annual event July 24. The Bikes 4 Life Annual Peace Ride brings people together from all over Oakland and the Bay Area to take part in a collective healthy activity and calling for more peace in the streets. There is something special about seeing 300 riders coming together to ride around Lake Merritt and through the inner city of Oakland in unity. The B4L ride is one of the most diverse rides in the Bay Area, attracting people from many different backgrounds, and you can see from the looks on bystanders’ faces as they pass that it’s special. Even along the ride folks are riding and meeting each other, some for the first time, and there seems to be no better feeling. 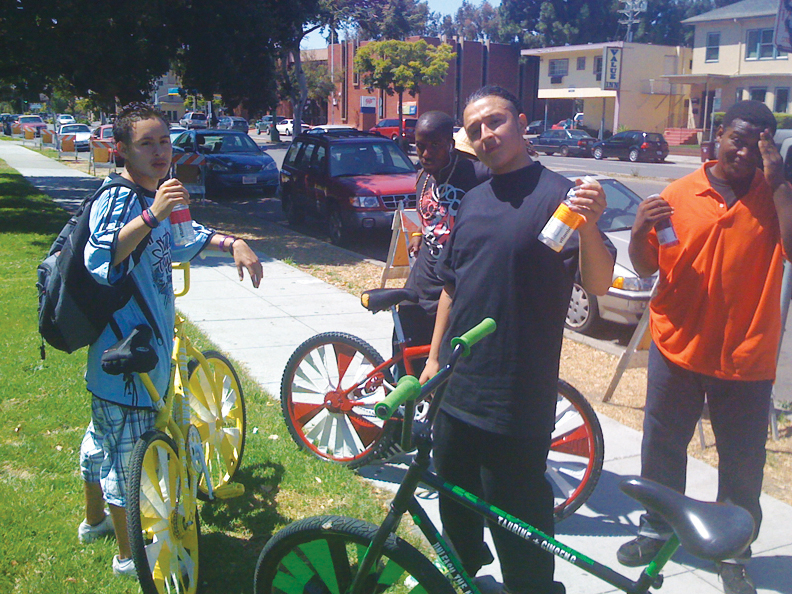 This year is going to be special because for the first time we’re having a night ride. Can you imagine 300 to 400 people on bikes all lit up with lights taking over the streets? It’s an amazing site to see. Following this year’s ride is another first for us at our end destination: We’ll be having a drive-in style movie projected on the side of Revolution Cafe. Complete with food, drinks and prizes, the feature movie will be a classic, “The Warriors,” which is about a gang leader gunned down in an effort to sabotage a gang truce, which we feel is parallel to the system we live in that is benefiting from us continuing to kill each other. The film starts at 8:30, and all are welcome.

M.O.I. JR: Can you tell us about some of the non-profit work that you were involved in before Bikes 4 Life?

Tony Coleman: The foundation of One Fam began in 1996 after I led a campaign to get a rogue killer cop fired from SFPD. The cop killed Aaron Williams, an unarmed Black man who was pepper-sprayed and left to die in the back of a paddy wagon. I organized a coalition including Van Jones of the Ella Baker Center that helped put him and others on the map.

What made this so different was the introduction of hip hop activists, due to their unique way of using spoken work when addressing the police commissioners. Their raw street flavor attracted many youth who’d had prior negative interactions with the police, making every hearing the place to be for youth in the community.

After that campaign, the formation of Thirdeye Movement was established, which ended up leading the fight against Prop 21. That was well documented. The organization fell apart due to in-fighting, leaving the controlled funding with the parenting organization, and they later grew into a well established institution, while many of the less educated, less connected were left to pick up the pieces. Some will never engage in politics again, while others still work in the community for other organizations. We just held a 10-year reunion, where many came out and told stories of how the experience shaped their lives. One Fam was born in 2000 in the spirit to resurrect that movement but not to be based around an issue, but unity, therefore going with the name One Family.

M.O.I. JR: What can people do to help Bikes 4 Life? How can they keep in touch with you online?

Tony Coleman: The way people can support One Fam is by donating money, time or writing skills. Since we’re an established 501(c)(3), we can apply for funding but, with limited staff, we’re often overlooked by more established organizations. We know eventually we’ll be able to staff our organization, but we’re so excited about the impact we’re having now we can’t wait for the days when our organization gets the recognition and funding it deserves.

Be a corker to protect the Peace Ride

Richmond Spokes is looking for 15 cyclists who are comfortable with creating a safety buffer for youth and adults on Saturday’s Peace Ride. They will present a simple 15 minute safety briefing a half hour before the ride on the grass by Fairyland. They will demonstrate corking, a safe, courteous way to block traffic during large bike rides. For more information on corking, check out Richmond Spokes page: https://sites.google.com/a/richmondspokes.org/about/how-to-cork-on-a-large-group-ride. To RSVP just text “corker” or call (510) 387-7466 or email b4lcork@richmondspokes.org and put “corker” in the subject.

The West Oakland-based organization Bikes 4 Life announced today that in honor of Oscar Grant III and all victims of police abuse, the group’s third annual peace ride will have a new theme in 2010: Peace from Police. The ride begins Saturday, July 24, 7:30 p.m., at Lakeside Park, tours Lake Merritt and ends at the Bikes 4 Life bike shop, with a Movie Night to close out the evening.

This will be our third annual Peace Ride. As lead organizer Tony Coleman explains, it’s easy to say stop the violence, but we have to call for an end to all kinds of violence, including the violence young people of color experience every day at the hands of police.

Coleman also takes issue with the media when it perpetuates stereotypes that justify police abuse, saying Oakland already had a bad reputation. Then on the night of the Mehserle verdict, the media ignored the beautiful, multi-racial, multi-generational Speak Out we had against police brutality and focused instead on property damage later that night. To make matters worse, the police blamed anarchists and outsiders for causing trouble, says Coleman, yet the OPD released 15 pictures of mostly African Americans and expects the public to help identify them.

The Peace from Police ride will once again unite a diverse cross-section of hundreds of Bay Area residents just days after the Oakland and BART police fired over 50 bullets, killing a man near Fruitvale station on July 17, and after former BART officer Mehserle supporters rallied on July 20 in Walnut Creek. Organizers point out that there has been so much gun violence involving the police, even since Oscar’s murder on New Year’s Day 2009, that the community feels very fearful for their lives and their loved ones if they shall ever come in contact with the police – and this is just wrong, says Rachel Jackson.

The community will never have real peace as long as people are afraid of police, cannot trust those sworn to protect and serve, and have lost faith in the legal system since the Mehserle trial.