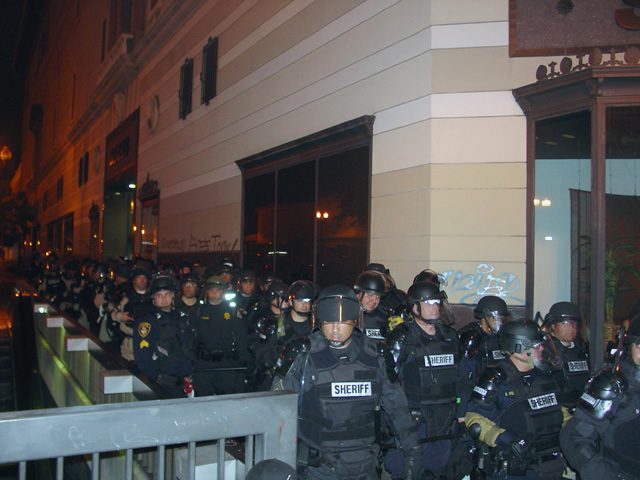 Oakland police before the Johannes Mehserle verdict warned about “professional demonstrators” that would be coming to Oakland. My question is who is paying these mercenary “activists”?

I want to share what I experienced in San Francisco April 30, 1992, the day after the LAPD officers who had been recorded viciously brutalizing Rodney King were found “not guilty” by the all-white jury in that Simi Valley courtroom.

Newscasters and headlines were already declaiming about the riots, looting and arson in Los Angeles following the verdict. I gathered with many hundreds of other people of myriad races, ages and apparent lifestyles near the Civic Center in downtown San Francisco. Most were there to protest the flagrant injustice of the verdict.

Before the march began, organizers over the PA announced that this would be a peaceful march and if someone vandalized or harmed anyone, they wouldn’t be protected from police arrest. The crowd started marching south to Market Street and then east on Market. Along the way some white fellows dressed in black with black scarves over their faces threw rocks through several car windshields. Collective gasps rose up from the crowd at the sound of the smashing glass.

At Sixth and Market a large camera had been set up on a tripod. The cameraman was aiming toward the buildings on the north side of Market. Suddenly three men rushed out from the crowd, each bearing a brick-like slab of concrete. One man busted the storefront of Merrill’s Drugstore; one busted the window of the jewelry store to the east of Merrill’s; the third busted the store to the west of Merrill’s. (I didn’t pay attention to the type of store at this third building.)

It just didn’t look right. The men were too synchronized. And that camera already set up as though waiting for something to take place at that exact location …

“What are you – the agents?” I hollered out.

“Cover your faces!” a voice to my right shouted. It was a middle-aged man in (no lie) an overcoat.

“Cover your faces!” the man in the overcoat bellowed again.

A young African American man standing in front of me turned around and said to me, “I think you’re right.”

The man in front of Merrill’s stopped his exertions and he too pulled a scarf from his pocket and put it over his face. Then with a few more expert well-placed kicks, he broke the lock and the front door of the drugstore opened. He went inside. A young boy went in after him – but no one else. The crowd of people stood there watching, held itself back.

A few minutes later the man who had broken into Merrill’s came out bearing a floppy satchel. It actually appeared to be empty. He ran eastward on Market Street toward a platoon of maybe a hundred police. He turned the corner and ran off northward. Not one policeman took off after him.

Yes, all these police were standing in formation a half a block from where this store-window smashing was going on. They made no move to stop these three isolated men who were doing the vandalizing.

After the Merrill’s Drugstore vandal turned off of Market Street, a police commander got on his bullhorn and proclaimed: “This is no longer a demonstration. This is a riot, and you are all hereby ordered to disperse.”

Meanwhile other police “platoons” were converging on us demonstrators in an encircling procedure. I “escaped” before the police had completely surrounded our crowd. Mass arrests of peaceful demonstrators as well as mere bystanders caught up in the police dragnet began immediately and long punishing civil-rights-violating detentions ensued.

Newscasters and news headlines the next day decried the violent demonstrations. Mob violence was the almost exclusive focus of mass media.

I’m convinced that what I observed there on Market Street was a “staged” event used to – perhaps among several purposes – clear the streets and control public perceptions. How effectively this strategy seemed to work! 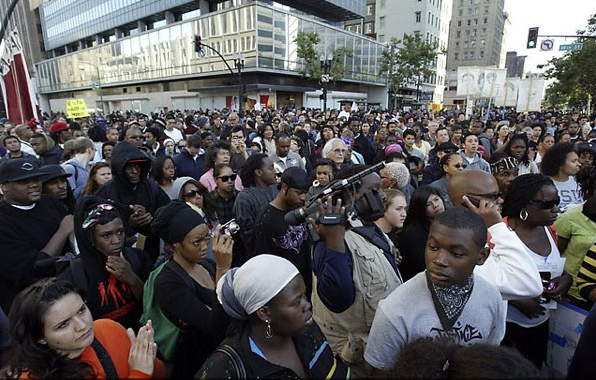 What other events, I wondered, had been similarly staged? I’m sure there were many genuinely angry people in San Francisco, Los Angeles and throughout the country who may have resorted to such things as rock-throwing, vandalism and looting as expressions of their outrage and the pent-up frustrations of their lives after hearing that Rodney King’s abusers had been exonerated. But how many, I wondered, had been led on, encouraged, manipulated?

Now Oscar Grant is dead. We watched the life of this vibrant young man snuffed out in an instant by either the recklessness or cold-bloodedness of Officer Mehserle. Again a verdict came down that many feel didn’t provide sufficient consequences amidst an ongoing “epidemic” of police killings of and violence toward men of color. Again, though masses of people came to protest peacefully in Oakland, the newspaper and news show topic was mob violence. Again a dramatic breaking and entry was used to clear the streets. Again the police made no effort to stop the masked black-clad figures who did the actual vandalism at that Foot Locker store. Again peaceful demonstrators and innocent bystanders were detained. Again community voices were provided no coverage.

I think the use of agent provocateurs is ongoing, pervasive, standard practice at mass gatherings and has been going on for a long time. I think it was the San Francisco Bay Guardian that reported that during an anti-G8 demonstration black-clad youngsters were observed emerging from a police vehicle laughing and chatting with the police and then were later on seen with their black scarves over their faces engaging in their usual trash-burning, window-smashing antics.

The little incident I witnessed in San Francisco after the Rodney King verdict was almost 20 years before the Johannes Mehserle verdict. And more than 20 years before the Rodney King disturbances, I stood with anti-war protestors at an airport hangar in relatively conservative Teaneck, New Jersey, where Richard Nixon had come to campaign. It was 1970 and I had come with a group from Rutgers University-Newark. We held signs and recited some chants way in back of the hanger.

Suddenly two scruffy fellows joined our group and started yelling “fuck you!” They launched a balloon from which was suspended a small “fuck you” sign. Though Nixon up on the stage way in front of the hangar couldn’t possibly have heard what those two fellows were saying nor read their little “fuck you” sign, his speech was all ready with references to those “foul-mouthed radicals back there.” My picture was in Time Magazine in the background of a picture centered on those two scruffy fellows, one perched on the shoulders of the other, and the caption made reference to the obscenity-spouting anti-war demonstrators.

Those are some reasons why I’m convinced such “dirty tricks” have been going on for a very long time.

Who plans these things and why? Who benefits? Who feels threatened by groups of people in our streets united to demand changes? Who wants to make the public hate and fear demonstrators and afraid and unwilling to participate in public gatherings for civic purposes? Who wants to make us feel afraid of each other? Though permits to assemble can often not legally be denied, staged mayhem can be used to clear us off of our streets and to detain and arrest community leaders. Community voices can be drowned out amidst the strident predictions of and then censuring of mob violence.

People who currently have the most power, material wealth and control have the most to fear from people getting together to fight against war and injustice. Those who feel an endless hunger for amassing wealth have the most need for manipulating others. I suspect the dirty tricks of provocateurs have been going on for generations. Creating havoc is easy – and such an effective tool.

Folks, I think we’re being played.

Dianne Heitman can be reached at dyanheitman@earthlink.net.