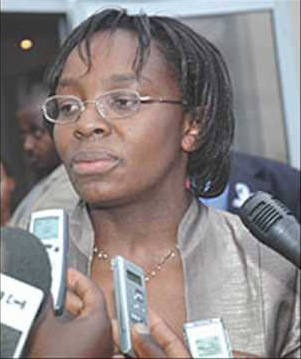 After 16 years in exile, I came back peacefully to my motherland.

Peace will be my guiding light in my political activities and the activities of my political organization, FDU INKINGI, in our endeavor to end injustice and remove all barriers to the people’s full enjoyment of their inalienable political and civil rights.

The Rwandan people are now living in anxiety and fear and are longing and yearning for a genuine policy of national unity and reconciliation.

My party and I are engaged in a political struggle which will lead us to victory against all forms of injustice and [for] genuine democracy based on the freedom of each and every one. We will soon witness sham elections in which election results are already established to hoodwink the world that the people have been given a choice. The main preoccupation [of the incumbent] is to cling to power that has been seized through the force of arms.

The bell tolls for the chains of the dictatorship. It is time for Rwandans to claim their inalienable rights, to refuse the abject feeling of being despised. Our response to sham elections is a non-violent resistance to challenge the legitimacy of the looming masquerade and its subsequent results.

Our core objective is to put a permanent end to dictatorship and put in place a political system that respects and protects all the components of the Rwandan society to make sure that nobody loses life because of one’s ethnic or regional affiliation or because of one’s political opinion.

This has been our political objective since the creation of our party FDU INKINGI.

This has been the guiding principle of my political engagement since I arrived until now. We must tame fear in order to liberate ourselves. We want to eradicate poverty, hunger, nepotism, corruption and clientelism which have become the hallmark of the regime. We want to put an end to social inequalities, to discrimination as well as to confiscation of other people’s property and land. 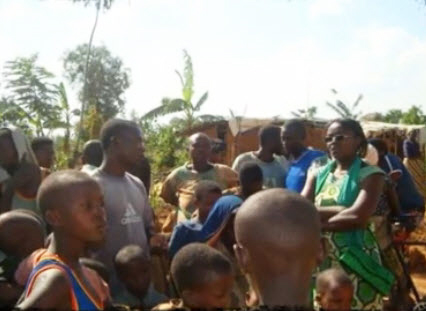 We are fighting against dictatorship, generalized injustices, the iniquitous Gacaca courts, community work punishments imposed without due process of the law. We want that each Rwandan walks with his head high, with dignity; we want to break all the barriers that prevent us from feeling full citizens of our country.

With regard to education, we want to improve the quality, to match the curriculum of education to the real needs of the country and our region and [to] enhance the competitiveness of the country vis-à-vis other countries, the respect of the teacher, availability of school material and equal access to education irrespective of social class, ethnicity or region.

In the field of health, our motto will be “health for all” by improving the health care infrastructure, access to medical care, the availability and quality of health personnel, equipment and medicine. The welfare of the population will be our priority in our program. Every job must regain its value and provide a decent salary. In the rural areas, people must get decent shelter and safe drinking water.

The agricultural policy must ensure that people get enough food security and give more value and dignity to farmers. Our political program has a national reach. Our political program is a matter of every Rwandan, irrespective of his ethnic origin, regional, gender, religion, profession or social class. Our vision of a reconciled people involves the necessity to remember our loved ones, mutual respect, national dialogue, the protection of minorities and equal opportunity.

We call on each one of us to empathize with victims of genocide and crimes against humanity. We encourage the members of the Rwandan Defense Forces, police and security forces to remain professional in their work and to desist from getting involved in partisan politics. Our call goes also to the public media, to the public service, to local administration and to members of the judiciary.

Even in my captivity, six months after my arrival in the country, my experience on the ground has given more meaning to my political conviction and commitment for fundamental political change. I am convinced more than ever before that Rwanda needs a different kind of leadership and political direction for the best interest and welfare of all Rwandan citizens.

I witnessed with my own eyes humiliation, injustices, iniquity, dictatorship and the arrogance of the party in power that its zealots and allies impose on the citizens. My comrades in the struggle and myself have endured and still endure both moral and physical abuses from the regime of Kagame. Our rights and rights of many others have been violated.

Political parties, members of the Permanent Consultative Council of the Opposition have been subjected to an increasing persecution. The Democratic Green Party of Rwanda is still mourning the assassination of its Vice President M. André Kagwa Rwisereka that took place on the 13th of July 2010 and his beheaded body found on the 14th July 2010. The party has been thwarted in its attempts to register and its leadership has been receiving death threats.

The Parti Social IMBERAKURI, although it has been registered, has been split into two wings, with one splinter group allied to the regime in power. The founder, President Bernard Ntaganda, is in detention since the 24th June 2010, charged with negation of genocide, divisionism and formation of a terrorist group. His private secretary, M. Aimable Sibomana Rusangwa, has disappeared since the 13th of June 2010. 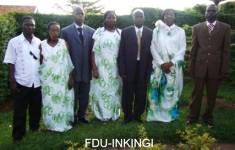 The party FDU INKINGI, not yet registered, is also facing the fury of the dictatorship, and three members of its executive committee are either under house arrest or out on bail. Our efforts to legally register FDU INKINGI have been crushed. The regime erected administrative and legal barriers in order to ensure that genuine opposition is left in the cold. FDU INKINGI is too big to go through the net set by the regime in power. The fear of a serious competition for power has led the regime to reinforce its dictatorial machinery. An arsenal of anti-democratic laws has been put in place to seal off the political space.

Since January 2010, FDU INKINGI has submitted unsuccessfully six requests to organize its constituent assembly. The government refused. The official reason has always been based on the politically motivated criminal charges concocted against its chair and presidential candidate.

During the last five months, the regime has not been able to bring to court the full details of the charges brought against me. The allegations of denial of genocide, divisionism and collaboration with a terrorist organization are nothing more than a pretext to block all political activities. This is why I was arrested on the 21st of April 2010 and kept under house arrest since the following day. The zealots of the regime and the government press or partisan media have been feeding a lynching campaign.

My lawyers were put in detention. This was the case with Professor Peter Erlinder, defense lawyer at the International Criminal Tribunal for Rwanda, who spent three weeks in prison and Mr. Theogene Muhayeyezu, who spent two weeks in prison.

On the 24th of June 2010, a police sweep was carried out against members of the opposition who wanted to demonstrate peacefully. Many members of the FDU INKINGI were arrested: M. Sylvain Sibomana, provisional secretary general of the party; Ms. Alice Muhirwa, treasurer; M. Théoneste Sibomana, responsible for the party in Kigali; and M. Martin Ntavuka, FDU Nyarugenge. All of them were tortured.

Ms. Alice Muhirwa endured internal bleeding following hits with boots on her stomach. She was denied medical attention until she fainted in court. During torture sessions, she was subjected to a tirade of verbal abuses relating to ethnic hatred. In the same way, the torturers blackmailed in exchange for signing false pre-established accusations against me and M. Bernard Ntaganda for collaboration with rebels of FDLR and for having received funding via accomplices network operating in Kigali, [the] capital city.

On the 24th of June 2010, many members of the FDU INKINGI were arrested. All of them were tortured.

In his testimony in court, the permanent secretary of PS IMBERAKURI confirmed that he was subjected to the same blackmail during the torture sessions.

We call on the government of Gen. Kagame to ensure the security of people is guaranteed and to bring to justice those responsible for torture, degrading and inhumane treatment of people as well as the use of racist and hateful language during torments.

The sham electoral process must stop without delay and the date of presidential election postponed, paving the way for opposition political parties to register and participate and for the political leaders to be cleared of the trumped criminal charges. An independent national electoral commission agreed on by all the stakeholders is a must.

The sham electoral process must stop without delay and the date of presidential election postponed, paving the way for opposition political parties to register and participate and for the political leaders to be cleared of the trumped criminal charges.

If the election calendar is maintained and the muzzling and decapitation of opposition political parties remain, then the presence of international observers is a useless exercise. The regime will rig the whole process and manipulate election registry, the turnout, the management of poll stations, the counting of votes and obviously will decide the results it wants.

Under these conditions, the Rwandan people must denounce the legitimacy of this masquerade until proper, transparent and equitable electoral process is conducted. The Rwandan people have been put under so much duress but are still very resilient.

They are still alive.

Resistance is not only an organization but the determination of a people to resist a dictatorship. We need an open public debate on national issues and different political programs. I expect our friends not to fail Rwanda again. We are a nation and not a private property of one man. Calmly and with determination we shall resist the violence and intimidation of the regime of Gen. Paul Kagame.

Victoire Ingabire Umuhoza, chair of the FDU INKINGI Party, can be reached at Fdu.inkingi.rwa@gmail.com, through www.fdu-rwanda.org and www.victoire2010.com or by phone at 011-250-078583600. This story first appeared in the Black Star News, New York’s leading investigative newspaper.

Africans call on the ICC to investigate Rwanda’s Kagame