Supporters of Johannes Mehserle were far outnumbered by Oscar Grant supporters when they demonstrated in Walnut Creek on July 19 (see coverage in Indybay and the Bay View), but Todd Mehserle, Johannes’ father, and a dozen other supporters managed to pull off a follow-up demo in San Jose on Aug. 2 with no counter-demonstrators. They claim more pro-Mehserle events are in the works. 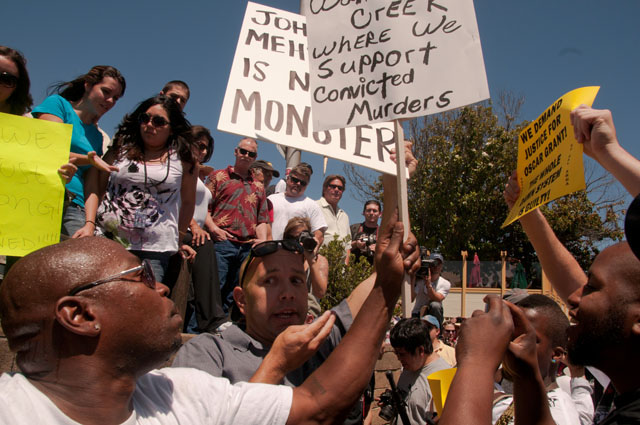 Last week KTVU presented two features on Mehserle’s life story, presumably intended to soften his public image as the Nov. 5 sentencing date approaches. Read the KTVU stories, “Mehserle’s Father: ‘He’s In The Wrong Place’” and “Close Mehserle Friend: ‘He’s Not A Monster’,” and watch the two videos at http://www.ktvu.com/video/24532609/ and http://www.ktvu.com/video/24534414/. Oscar Grant has received no such coverage.

And now Mehserle supporters are claiming that Judge Robert Perry – the judge who oversaw Mehserle’s trial for the murder of Oscar Grant which resulted in an involuntary manslaughter conviction – actually wants letters from them supporting Mehserle.

One of the main sentiments expressed by organizers of the two demos held “In Support of Johannes Mehserle and L.E.O.” is emerging as an apparently deliberate theme intended to engender sympathy for Mehserle, namely tying him to all law enforcement officers, as if shooting unarmed people in the back is just part of the job.

At the San Jose demonstration, Todd Mehserle was quoted by KTVU as saying that Johannes Mehserle is “in the wrong place [jail] … He grew up to be anybody he wanted to be and he chose public service. And this is his thanks for making a mistake. It’s very tragic and unfortunate. Of course, I’m here today just to support my son and to support all law enforcement, because it’s a very, very slippery slope when we start to send people to work with guns and not only civilly convict them, but criminally.” Todd Mehserle does not make clear exactly what “thanks” he believes his son should receive for killing Oscar Grant.

To engender sympathy for Mehserle, his supporters are tying him to all law enforcement officers, as if shooting unarmed people in the back is just part of the job.

Similar language currently appears at the primary Justice 4 Johannes support website: “It is MANDATORY that our Law Enforcement Officers carry a gun during the course of their duties. It is shameful that we require our officers to carry a gun and when an accident occurs with the same gun we tell them they have to carry, we turn around and charge them, convict them, and throw them in jail for trying to do their job.”

The website foists all responsibility for the shooting onto Oscar Grant himself for “posing a safety risk to officers and bystanders” and BART police training and protocols for setting “this accident in motion long before it ever happened.” 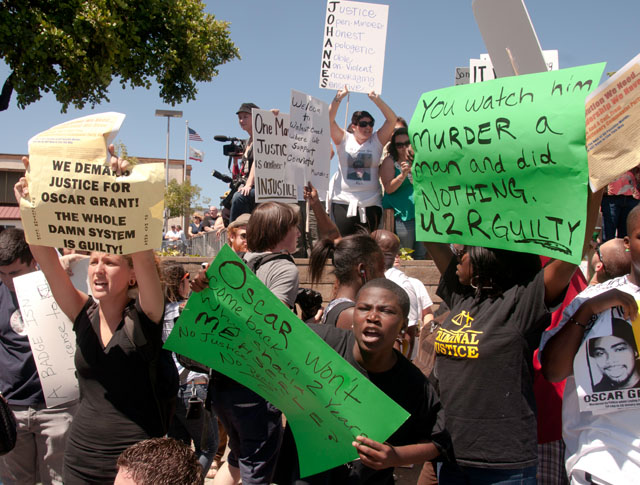 And now, undoubtedly in response to letters Judge Perry already has been receiving from supporters of justice for Oscar Grant which request that Mehserle receive the maximum sentence, a new email message from Mehserle supporters claims that Judge Perry wants their letters too:

“To all Johannes Mehserle Supporters,

“We have heard that Judge Robert Perry is wanting to hear from those in the community who support Johannes Mehserle! He has stated he wants our letters of support for Johannes and that he intends to read every one of them!!! This is awesome news!!!

“If you have not done so already, please visit the website www.justice4johannes.com and check out the tab ‘How To Help’ and select ‘Johannes’. You will find detailed instructions on how to write your support letter and where to send them. As the judge is asking for them, it is crucial we get them out ASAP! This is our chance to be heard and our chance to help set Johannes free! Don’t delay!!!

“In addition to sending your support letters, a petition has now been released and is awaiting your electronic signature! Please visit www.justice4johannes.com and click the tab that says ‘How To Help’ and select ‘Petition’. Please sign and forward to everyone you know!

“New photos of the San Jose Rally have been posted as well as recent news casts! Check them out!

“Remember to join the mailing list so you can be kept informed of what’s going on and how you can continue to help!

“Thank you all for your support!

How far KTVU goes in allowing supporters to portray Mehserle as the victim remains to be seen, but undoubtedly there will be much more activity from supporters on both sides before Mehserle is sentenced.

For starters, a protest against KTVU’s sympathetic coverage of Mehserle will be held Thursday, Aug. 12, 12:30 p.m., in the parking lot outside the station, at 2 Jack London Square, Oakland. Be there in honor of Black August!

Dave Id is a journalist and activist who has thoroughly documented the Justice for Oscar Grant Movement with vision, sensitivity and consummate expertise in prolific postings at http://indybay.org/oscargrant.

We should really step up our efforts to get letters to the judge demanding the maximum sentence.

You can get a draft letter from www.newyearsmovement.org, which is also reproduced below.

Judge Robert Perry presided over the Mehserle murder trial in Los Angeles, in which Johannes Mehserle was found guilty of involuntary manslaughter and using a firearm in the commission of a crime. Mehserle’s defense and other supporters are attempting to influence the sentencing through the media and other events, such as the recent rallies in Walnut Creek and San Jose.

They are also appealing via Channel 2 News for the public to believe that Mehserle is a good person, that he’s not a monster. Judge Perry must also hear from members of the community, from all over California and the nation. PLEASE WRITE A LETTER TODAY! See below for sample text.

1) Write to Judge Robert Perry, urging him to give Johannes Mehserle the maximum sentence permissible under the law: four years for involuntary manslaughter conviction plus 10 years for gun enhancement.

3) Please email a copy of your letter to newyears@onefam.org. 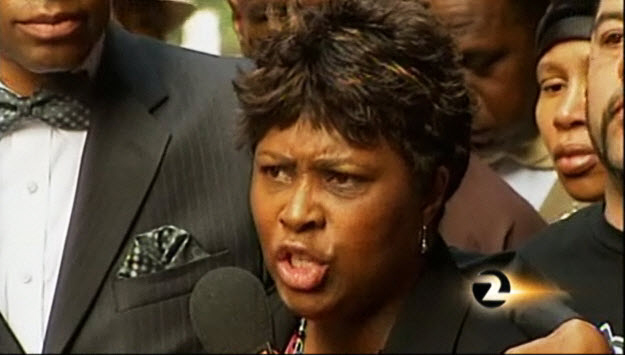 Although Johannes Mehserle was convicted of involuntary manslaughter, as Ms. Wanda Johnson, Oscar Grant’s mother said, “I believe Oscar was murdered.” I also believe Mehserle murdered Oscar Grant. Oscar Grant’s own cell phone photo of Mehserle holding his taser is evidence that he could not have mistaken his gun for his taser.

Our community overwhelmingly believes that Mehserle should be sentenced to the maximum amount of prison time permissible under the law. The maximum sentence for both gun enhancement and involuntary manslaughter is 14 years.

The community believes that Mehserle is a danger to society and must serve the full sentence for his crime. Our community is seeking justice; please sentence Johannes Mehserle to the maximum sentence.

Thanks all for your support!

Cephus Johnson can be reached at cephusjohnson@yahoo.com.