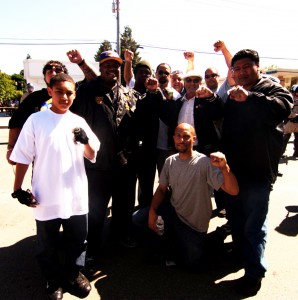 A rally staged in support of former BART police officer Johannes Mehserle in Walnut Creek July 19 drew hundreds of protesters, dozens of journalists and photographers and plenty of police.

But instead of the 100 Mehserle supporters, who had gathered in the parking lot between the Contra Costa Superior Court building and the Buttercup restaurant, being greeting by a stage, podium or speakers, they were met by counter-protesters demanding justice for Oscar Grant. Mehserle was convicted July 8 of involuntary manslaughter in the 2009 shooting of Grant at the Fruitvale BART station in Oakland.

Pro-Mehserle and law enforcement protesters held signs like “Free Mehserle” and “If U Don’t Like Police Officers, Next Time You Need Help, Call a MethHead.”

Shortly after 2 p.m., when the rally was to begin, the number of counter-protesters began to swell. Demonstrators held signs that read “Jail Killer Cops” and “Justice for Oscar Grant.” The street was filled with protesters standing along Ygnacio Valley Road until police in riot gear forced protesters back onto the sidewalk. Businesses on the street had been closed since shortly after 1 p.m.

For much of the rally, demonstrators yelled back and forth at each other and accusations of racism abounded, but there were also strong dialogues between people on all sides.

The two spoke about their differing perspectives: Walker being a 30-year-old Black male from Oakland and Avila being a 14-year law enforcement veteran in the city where he was born and raised. 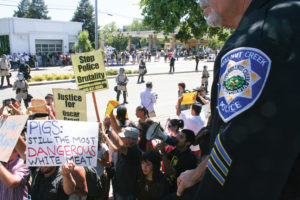 Mehserle supporters chanted, “It’s not about race,” although the majority of Mehserle’s supporters were white. The most notable exception were two Black males, including one holding a “Free Mehserle” sign.

The atmosphere was racially charged. Besides a huge banner reading “Jail all Racist Killer Cops” dominating the view from the road, counter-demonstrators began chanting, “Where are your white sheets?” a reference to the racist terrorist organization, the Ku Klux Klan. 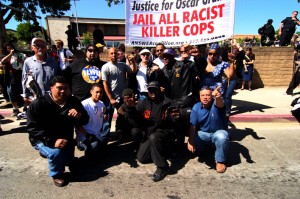 Numerous times during the rally, police from different agencies would change positions and march onto the street – now blocked off – and Mehserle supporters would applaud. Many counter-demonstrators on the street would boo.

After leading a chant of “Back the Badge,” law enforcement supporter Mike D’Lorenzo told The Black Hour he was being unfairly labeled a racist because he disagreed with Grant supporters. He said he supported Mehserle because the shooting was “a tragic mistake.” He agreed with the verdict.

As more Grant supporters arrived, more people filed onto the streets again. While it appeared that most of the crowd continued to yell in each other’s faces, many ventured to other sides and engaged people in conversations who had opposing views.

After leading a chant of “Back the Badge,” law enforcement supporter Mike D’Lorenzo told The Black Hour he was being unfairly labeled a racist because he disagreed with Grant supporters. He said he supported Mehserle because the shooting was “a tragic mistake.”

In an interview at the end of the rally, Avila, who came out to support Mehserle and law enforcement officers, emphasized that being pro-Mehserle does not mean someone is anti-Grant.

“If you talk to all the police officers out here, they’ll agree it’s a tragedy. Oscar Grant did not deserve to die. But it’s not a murder,” Avila said. He said Mehserle did not plan to shoot Grant because of his race and that takes credibility away from those who are really victims of racism.

“It’s the totality of the circumstances,” Avila said, referring to the fight reported on BART and Mehserle’s lack of training opposed to “one white guy going up there saying ‘Here’s my chance to shoot a Black man in the back.’”

Avila, along with all other law enforcement officers, told The Black Hour that former BART police officer Tony Pirone escalated the incident, with some adding that he should be prosecuted criminally.

But many Grant supporters suggested that Mehserle was acting in a manner consistent with historic racism in this country, one saying that he may not have even been conscious of the influence of race, but acted upon it.

In an interview with Youth Radio’s Pendarvis Harshaw, Nancy Rhiemer from Pleasant Hill said she came out to protest the unjust murder of Oscar Grant.

“It’s to be expected, because they don’t know any better. They have to realize that this injustice is ongoing,” Rhiemer said.

The pro-Mehserle demonstration was organized on Facebook and highly publicized by the media. Sixteen miles east of Oakland, participants said Walnut Creek was chosen because it is centrally located. Ironically, there were no speakers at the event and rally organizers have worked to keep their identities secret.

Mehserle, who is white, was found guilty of involuntary manslaughter on July 8 for the New Year’s Day 2009 shooting of Oscar Grant, who is Black. A widely publicized YouTube video of Grant being shot while lying on his back led to mass protests in Oakland in January 2009.

Mehserle is currently awaiting sentencing. He was originally to be sentenced in August, but the hearing was continued to November.

Journalist Reginald James can be reached at theblackhour@gmail.com. This story first appeared on his blog, The Black Hour, at http://theblackhour.blogspot.com/2010/07/mehserle-rally-in-walnut-creek-causes.html 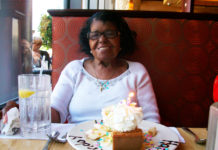