KPFA 94.1 reports on the involvement of Uganda in the war in Iraq and the recruitment of Ugandans by military contractors. – Video: Ann Garrison 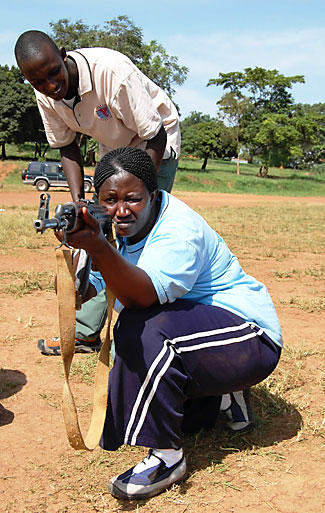 Last week the Pentagon proclaimed that the last U.S. combat forces had left Iraq. This after an armored unit drove out of the country and crossed the border into Kuwait. However, there will still be 50,000 U.S. troops in Iraq.

An Iraq veteran turned war critic, Camillo Mejia, said that 4,000 U.S. troops who are leaving Iraq will be replaced by 7,000 employees of private military contractors. Other observers say the U.S. has long outsourced the Iraq occupation to troops from some of the world’s poor nations, such as Uganda, Angola, India and Bangladesh, and that many of the mercenaries due to replace other U.S. troops will also come from those countries, especially from Uganda.

The New York City-based Black Star News publishes many critics of U.S. foreign policy in Africa, and Black Star’s Ugandan-American Editor Milton Allimadi is among the most outspoken critics of U.S. use of Ugandan mercenaries, elsewhere in Africa and in Iraq.

“This is not surprising,” declares Allimadi. “It’s a disturbing development and something needs to be done to really stop this because Ugandans are being victimized by the dictator, Yoweri Museveni, and now in collusion with the United States government.

“And another reason why this is very disturbing: It’s an extension of what the U.S. has been doing for a couple of years now with respect to Uganda – outsourcing of torture of people interdicted by the United States to Uganda. And this was well documented in a report by Human Rights Watch that has not garnered sufficient attention.

“The report is called ‘Open Secret: Illegal Detention and Torture’ by the Joint Anti-Terrorism Task Force in Uganda. It was published last year, April 8, 2009, and it says that the United States provided not only training, but also $5 million for Ugandan security agents to torture individuals detained in Uganda, which is illegal according to the Leahy Amendment, an amendment by Sen. Patrick Leahy, which prohibits U.S. cooperation or funding or training for any government that is torturing its individuals or committing human rights abuse.

“It needs to be investigated by the Senate and by Congress.” 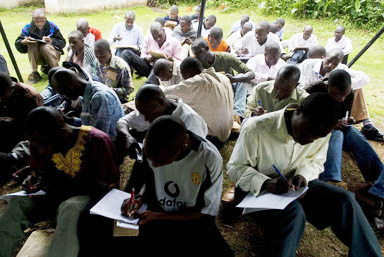 Black Star News contributor Michael Kirkpatrick has traveled in Northern Uganda, the wartorn home of the indigenous Acholi people, and written about Blackwater, Dreshak and KBR’s recruitment in refugee camps, otherwise known as Internally Displaced Persons or IDP camps, which he first observed in 2007.

“Back in 2007, I traveled to Northern Uganda at the invitation of some Acholi friends of mine,” says Kirkpatrick. “This was an opportunity for me to see how that part of the country was rebuilding after a 20-year rebel insurgency.

“While I was there, I met a young woman who was there from the British High Commission, and she was studying a local language in the city of Gulu, which is the largest city in Northern Uganda. And she was there to learn this obscure tribal African language because she needed to train translators in Iraq. Well, I thought this was odd, that the Acholi language was being spoken in Iraq.

“I’ve come to learn even since then that the recruitment of Ugandans is a very common practice by these military contractors. There are a lot of things going on in East Africa that require the U.S. presence there. And currently, right now, there are recruiting stations in the capitol city of Kampala and there are regularly long lines of Ugandans waiting to get jobs.

“For Ugandans, this isn’t an act of fighting Al Qaeda. This isn’t an act of justice or spreading democracy in the Middle East. For them it is purely an economic issue. They need the jobs; they need the money. From my point of view, we are exploiting a desperate people. We’re bribing them with money to carry weapons into a war that is not theirs.”

Kirkpatrick also says that private for-profit companies do not have to report casualties or open their accounting books to anyone.