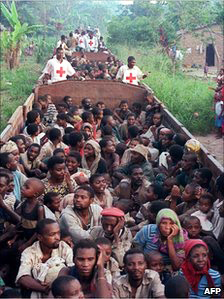 The political cost of standing with Rwandan President Paul Kagame mounts by the hour.

Here’s a partial list, as of Aug. 28, 2010, of world press coverage of the leaked report from the United Nations Office of the High Commissioner for Human Rights (OHCHR) mapping atrocities committed in D.R. Congo. The report points to crimes which might be labeled genocide against Rwandan Hutu refugees and Congolese Hutus committed by Kagame’s Rwandan army between 1996 and 2003:

This is a very partial list of the many outlets publishing the Associated Press World Service report:

The final version of the report has become a political contest. The Globe and Mail reports that U.N. Secretary General Ban Ki-Moon has reportedly argued for revision that eliminates the allegations of genocide against Rwandan and Congolese Hutus by Kagame’s Rwandan army, after Kagame threatened to remove Rwandan “peacekeepers” from Darfur and Haiti.

What will Obama do?

As the political costs of standing with Kagame mount, many wonder, “What will Obama do?” On Jan. 20, 2009, all eyes were on the Washington, D.C., and the inauguration of our first African American president, Barack Obama. But Africa watchers were transfixed by the horrifying news coming out of Eastern Congo, as the Rwandan Defense Force and Congolese armies, the CNDP militia and MONUC, the U.N. peacekeeping force, emerged as a coalition formed to finally hunt down the FDLR.

But, Rwandan troops entering D.R. Congo to hunt Hutu militias? Looking back, that Inauguration Day headline reads very differently now. No one needs to understand all the acronyms to see what’s wrong.

Hutu militias, the FDLR, are always the excuse for U.S.-backed Rwandan troops in Eastern Congo, but how much longer will Obama embrace the excuse, after this leaked report of what appears to be genocide against Rwandan Hutu refugees and Congolese Hutus by the army of Rwandan President Paul Kagame?

What will Obama do, as the term “Congo Genocide” emerges and the political costs of standing with Kagame mount?