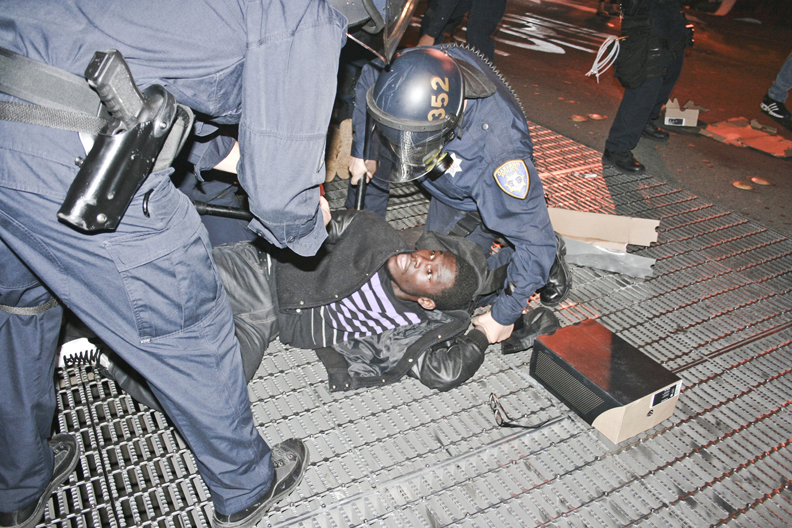 The Johannes Mehserle verdict was read nearly three weeks ago. Now the biggest story in the news connected with it on television and in the media is the Oakland 2010 Rebellion’s shutting down of Foot Locker in downtown Oakland. After a POCC People’s Investigation, what baffled me was that many people even in our community could not politically put together that liberating shoes, t-shirts, hats and other merchandise was putting political pressure on downtown corporations and companies to put pressure on the local, regional and federal government to prosecute these criminals that killed Oscar Grant on New Year’s morning of 2009.

Although these images, with a police twist, are what is captivating news audiences around the globe, it is rarely talked about that the federal government only started investigating civil rights violations in the case after the most recent rebellion. Just like last year, Oakland Mayor Ron Dellums sincerely tried to address Oscar Grant’s murder by BART police only during the night of the first rebellion connected with this case, which was on Jan. 7, 2009.

Mayor Ron Dellums furthermore only called for Johannes Mehserle’s indictment for murder on the eve, Jan. 13, ’09, of the next big rally, which turned into the second night of rebellions. Then Mehserle’s attorney Michael Rains used the rebellions to move the case to Los Angeles. He claimed that the people, most notably Black people, were incapable of coming up with an unbiased verdict in Alameda County because of this fact and all of the media around it.

To further study the phenomenon of the Oakland Rebellions and the media coverage surrounding particularly the raiding of Foot Locker, “one has to consider how sensational, desperate and opportunistic that it makes the rebels look,” if you look at the event through the politics of the system that is working day and night to discredit the effectiveness of the people’s fight against police terrorism.

Big media’s job, since the many forms became widely accessible in this country, is to back up the justifications, explanations and definitions of the elite that run the social, political and economic system that we live under. In the days following the most recent night of rebellion, the Foot Locker story was paired with the laying off of 80 cops from the Oakland Police Department, which subconsciously says to whites and other groups who have been affected by government sanctioned racist attitudes toward Blacks, “What are we going to do when the Blacks get angry again if we lay these cops off?”

The word “justice” never crossed the television screen, news headline or the media consumers’ mind. No one in the corporate media talked about the countless police murders in Black and Brown neighborhoods all around this country that have been occurring consistently for decades with no redress.

In a less publicized event, the Hibiscus Restaurant, a part of the New Parish club complex which has hosted such political acts as comedian Dave Chappelle and the rap group the Coup, was vandalized, as they would say, or how we say, politically educated, because of the lack of overt support for the justice for Oscar Grant and other victims of police terrorism campaign. Although Namane Mohbalane, the brother of pop singer Goapele, is a partial owner of the restaurant and venue, the window wasn’t spared on the night of the verdict.

The singer herself spoke out “in support” of Oscar Grant and “against” the Oakland Rebellions on globalgrind.com. Anyone claiming to be from Oakland really with their ear to the streets would know that you cannot support Oscar and his friends who were with him that night and be against the rebellions, because, as explained before, the rebellions are what has pushed this case this far; the rebellions are the only voice that the people have that has gotten the attention of local and federal government officials in this battle.

“Everything is political,” as the late great deputy Chairman Fred Hampton of the Black Panther Party used to say, including the Oakland Rebellions, the destruction of property and the shutting down of downtown Oakland’s Foot Locker. If nothing else, the rebellions were a signal to business owners and others throughout the Bay Area that you better at least fake like you support the campaigns that people are passionate about, because your lack of sincere support may come back and bite you in the ass.