“[W]e have to have a president who understands the reality that people in New Orleans were being neglected prior to the hurricane. And there are potential Katrinas all across the country that have been left unattended.” – Sen. Barack Obama, PBS televised presidential debate, July 28, 2007 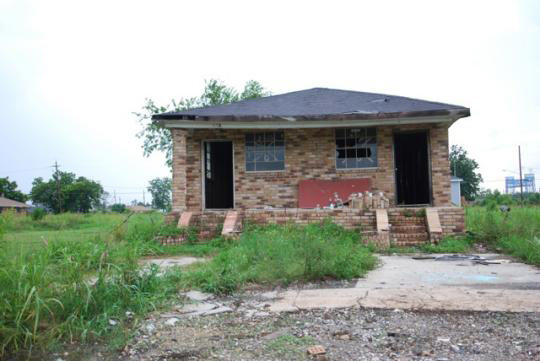 New Orleans – On the fifth anniversary of Hurricanes Katrina and Rita, Gulf Coast residents are still trying to rebuild their lives after years of broken promises and government neglect.

The Gulf Coast Civic Works Act, the bill intended to fund reconstruction efforts that would have provided hundreds of thousands of jobs for displaced residents, languishes in Congress. Affordable housing eludes both survivors in New Orleans and those displaced by the storm.

After the devastating oil spill that has wreaked havoc on the local economy, the Obama administration has failed to take substantive action against British Petroleum on behalf of Gulf Coast residents and small businesses. British Petroleum’s real liability goes far beyond the $75 million cap imposed by the cowardly Oil Pollution Act of 1990.

Why shouldn’t they be held fully responsible for their criminal negligence? It’s not for Congress and the administration to negotiate a number that works for BP, erasing the real cost of this disaster in the process.

Unfortunately, the only thing that is abundantly clear is that our government failed in protecting the residents of the Gulf Coast during the storm and it has failed them yet again by breaking the promise of a just recovery.

Without a doubt, coverage of the anniversary of the storm will generate plenty of discussion regarding individual stories of survival and triumph, of which there are many. But for far too long, the story of a rights-based recovery has been neglected.

Residents of the Gulf Coast region have long called for real solutions to address the disparities exacerbated by the storm, including an adoption of the U.N. Guiding Principles on Internal Displacement* and a demand that no more federal tax dollars be used to fund post-Katrina development projects that result in racial disparities in housing, healthcare, education, employment and environmental protection.

What is most frightening is the reality that Gulf Coast residents still have little to no federal policy in place to ensure sustainable change and recovery. The vast majority of funds and temporary practices connected to Katrina/Rita recovery are discretionary – not permanent. Washington is playing a political game with the livelihoods of Gulf Coast residents. It’s not fair and it’s time for decision makers to take real action.

The fifth anniversary of this disaster provides our country with the opportunity to investigate the policies at work in preventing a just recovery. The solutions that would enable such a turnaround in the Gulf are clear. It’s now our turn to look toward implementing them so that Gulf Coast residents might have a chance to take back control of the future of the region.

Facts on a failed recovery from the Katrina Information Network

Overall population: Five years after Katrina, the most liberal estimates are that 141,000 fewer people live in the metro New Orleans area.

Displaced people: Louisiana residents are located in more than 5,500 cities across the nation.

Rebuilding: At least 19,746 applications for rebuilding homes that are eligible for funding have not received any money from the Road Home grant program.

Economic health: The metro area has 95,000 fewer jobs than before Katrina, down about 16 percent. Black and Latino households earn incomes that are $26,000 (44 percent) and $15,000 (25 percent) lower than whites. New Orleans has a poverty rate of 23 percent, more than double the national average of 11 percent.

People receiving public assistance: Over one-third of Social Security recipients who lived in New Orleans have not returned. Medicaid recipients have declined by 31 percent. Supplemental Security Income recipients are down from pre-Katrina 26,654 to 16,514 – a 38 percent decline.

Public transportation: Total ridership is down 65.7 percent, from more than 33 million in 2004 to about 13 million projected for 2010.

Oil damage: There have been at least 348 intentional fires set in the Gulf of Mexico – controlled burns they call them – since the explosion of the BP rig. About 1.8 million gallons of chemical dispersant have been dumped into the Gulf, more than a million on the surface and about 750,000 gallons sub-sea.

*The Guiding Principles on Internal Displacement apply the basic human rights to life, health, freedom from racial and gender discrimination, adequate housing and other rights to protect people who are forced to flee their communities in times of disaster. Furthermore, the Guiding Principles on Internal Displacement establish the duties of national governments to ensure recovery and the rights of people displaced by a disaster to recover with dignity and justice.

The Katrina Information Network (KIN) is a collaboration of groups in the Gulf and across the country to build power for change. For the next 30 days, we will feature a dozen actions that anyone anywhere can do to support Katrina recovery work. For more information about the 30 days of solidarity and our current campaigns for just recovery, please visit our website, http://www.katrinaaction.org.