by Sam Edwards and Gabrielle Wilson 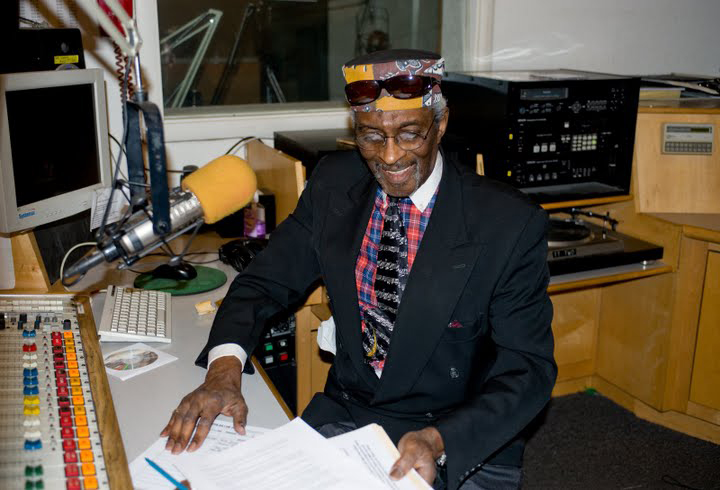 Berkeley’s Pacifica radio station KPFA’s (94.1 FM) jazz programmer – or jazz activist, as he sometimes referred to himself – The Doug of Edwards has died, passing over in the mid-morning of Sunday, Sept. 19, at the age of 80. Earland Edwards was his legal name, but he was called Doug by most.

For the past 30 years, beginning in May of 1980, never once arriving late for his show, Doug was heard live from 11 p.m. to 1 a.m. on Saturday nights hosting his jazz program, Ear Tyme. Sometimes called Sir Doug of Edwards by his close KPFA friends Afikahn Jahmal Dayvs and Ken Pruitt, from the time he joined KPFA until failing health led to his hospitalization a few weeks ago, Doug punctuated virtually every show with his signature theme music, Milt Jackson’s “Blues for Roberta,” signaling the identity of the show and transitions.

Though glaucoma and cataracts were robbing him of his eyesight and illness his vitality in recent weeks, the radio personality continued to do his broadcast with hands on help from his longtime partner Cindy until near the end of his life.

He established Jazz Passages in 2000 and hosted the program during KPFA’s Music of the World slot until a few weeks ago. Gabrielle Wilson, his producer, then began filling in for him. He was a deeply committed jazz radio man.

Doug began his volunteer jazz radio host career in 1978 at San Francisco’s radio station KPOO, 89.5 FM, hosting a program called The Audible Art Gallery for two years. He played jazz recordings and hosted broadcasts of jazz musicians performing live in the studio. His mission was to create stronger connections between the artist and community; he tended to focus on what he called “resident musicians,” connecting them and the community.

It was at radio station KPOO that he began evolving a concept of jazz radio programming that set him apart from other on-air personalities and that he brought to fruition at radio station KPFA. For several years, as observed by Bob Hershon, Doug would drag his “mixing board, mikes, stands, and cables into out-of-the way clubs and school auditoriums, recording hitherto unrecorded musicians, and editing it for his Saturday night broadcast on KPFA.”

He orchestrated and hosted KPFA’s first broadcast from San Francisco’s Hunters Point of a town hall meeting on Sept. 29, 2001, giving the community a vital voice. Perhaps no surprise, on Nov. 5, 2001, Edwards presented a live broadcast of The BAJABA Showcase from 195 Kiska Road in Hunters Point, featuring the Imani Voices of Praise and Yancy Taylor, the prominent vibist.

In 1998, Doug and his very good friend Afrikahn Dayvs, also a fill-in for Doug at KPFA and a regular programmer at Carmel’s station KRML 94.7 FM and Cupertino’s radio station KKUP 91.5 FM, with technical direction from Jim Bennett in a time slot donated by Greg Bridges, began presenting a live broadcast of The BAJABA Showcase on KPFA from the Buriel Clay Theatre, located in the African American Art and Culture Complex in San Francisco, that featured resident musicians.

Increasingly, Doug, with technical assistance from Micky Mayzes (Ms. M), Deverol Ross and Michael Yoshida, opened the doors of his radio programs to musicians, poets and leaders in community organizations, young aspiring radio programmers and others who accepted the opportunity to appear and promote their upcoming events. He made the radio station culturally relevant and accessible to all communities, though he kept playing jazz.

Doug was born on Jan. 9, 1930, in Harlem, New York, to a Caribbean-born father and an American mother. He was the oldest of three siblings, having a younger brother and younger sister. He joined the army at the age of 17; after his discharge, he worked for a short while in the CORE voter registration drive. Doug explained, “I was totally committed to civil rights, voter registration and fair housing.”

He moved to San Francisco in 1972. He worked in several different occupations, including traffic controller, officer manager and in the poverty program.

He and his long time partner Cindy got married on Sept. 9, 2010, in the Palo Alto Veterans’ Hospital where he was hospitalized and died of suspected lung cancer.

With his passing, The Doug of Edwards has left behind his newly wedded wife, Cindy, a son from his first marriage, five grandsons, three daughters, a host of friends, musicians, radio station KPFA, radio audiences and his many jazz and other CDs and albums.

As one writer noted, “One of the things that set Doug Edwards apart as a programmer and as a human being is an abiding commitment to the community in which he resides.”

The family is planning a program in memory of the one-of-a-kind jazz programmer. The public will be notified.